Fighting for Liberty in the Age of COVID-19 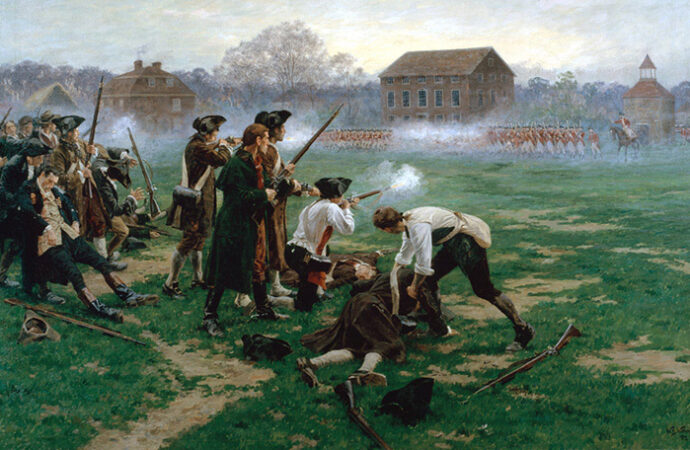 Imagine yourself standing in a motley band of 400 people at the North Bridge in Concord, Massachusetts. You and your neighbors are armed with a variety of firearms, many of you are apprehensive or frightened, and all of you firmly believe that a tyrant king commands your colony.

Then the king’s soldiers approach the bridge, ready to search the buildings in the village for weapons and ammunition. A battle erupts, causing casualties on both sides, and the king’s regulars retreat, rejoining their comrades to withdraw to the safety of Boston. Joined by hundreds of other farmers and small businessmen, you and your comrades pursue the British, sometimes shooting at them in the open, sometimes sniping at them from behind walls and trees.

By the next morning, 15,000 militia fighters have imprisoned the British army in Boston, and the War for Independence has begun.

Americans should always remember that date and those events.

But how did a rag-tag militia knock the socks off of well-trained, disciplined British regulars?

First, those in the militia not only owned firearms, but they also knew how to use them. Many of them hunted regularly, some had served in the French and Indian War, and as a result a good number were undoubtedly excellent shots.

Imagine what would have happened had they lacked those weapons. No revolution, no Declaration of Independence, no United States of America. The history of our nation began with pitched battles in which guns came to the defense of liberty.

Those Massachusetts men were also defending their homes and their families. Unlike their opponents, they had skin in the game. The Redcoats marching against them were merely there at the behest of King and Parliament; the men who opposed them took a much more personal view of the situation. They were fighting for their homes, their farms, and their towns. They were defending what they loved, what they and their forefathers had built with their own hands.

Moreover, these Minutemen were fighting for their rights as Englishmen. Not all of them wished to break from the mother country. No, they wanted the same rights as Englishmen living in London, Oxford, and Birmingham, especially the right to representation in Parliament. Denied these rights, and faced by an invasion of their community, they defended themselves.

These colonials who would soon become Americans were also unaccustomed to big government. Unlike their cousins in Britain, they faced adversity and overcame it by dint of their own labor, sweat, and blood. They built churches, founded schools, cared for their neighbors to times of hardship, and conducted meetings to deal with problems within their communities.

Finally, they were lovers of liberty. The great majority of these rough colonials were literate; they read newspapers and broadsides, and some had studied the writings of John Locke. The better educated knew their ancient history and took as their exemplars Romans like Cicero, Cato the Younger, and Cincinnatus. An example: though educated at home and self-taught, Abigail Adams was well-acquainted with philosophy and history, was skilled with her pen, and brought an erudition to the White House which has scarcely been seen since among our First Ladies.

Those who fired the first shots of revolution and those who came after them, joining the army, building a government, and signing a Declaration of Independence, knew well the risks they were taking. Had they lost, they chanced losing their homes, being imprisoned, or facing death by hanging. The words that conclude the Declaration – “With a firm reliance on Divine Providence, we mutually pledge to each other our Lives, our Fortunes, and our sacred Honor” – were not rhetorical niceties, but a very real understanding of what might befall them if their battle for liberty ended in defeat.

Since January of this year, our liberties – the right to assemble, the right to practice our religious faith, the right to property and free enterprise – have taken a beating. Some of our state governors have acted as petty tyrants in issuing regulations regarding the coronavirus. Here in Virginia, a cradle of freedom in our nation’s history, our government has even closed the Skyline Drive to hikers and sightseers. Our governors claim to be looking out for the interests of the people, but at the end of this game businesses must reopen, the coronavirus will remain among us, and there may still be no vaccine.

Is this closure effective? Or are we demolishing our economy out of panic and fear?

We may never really know.

But one thing we do know: the government has demonstrated that it can attack our liberties without much kickback from its citizens. It has tasted power and tyranny, and will return to the table the next time we face a “crisis.”

But here’s the good news.

Citizens are now protesting these stringent measures. They have organized rallies calling for opening up their states. In Michigan, the state with the most restrictive shut down laws, 3,000 protesters gathered in the capitol, Lansing, to demand the lifting of restrictions. In New Hampshire, citizens gathered and chanted the state’s Revolutionary War motto: “Live free or die.” Sheriffs in Michigan and Wisconsin are refusing to enforce their governors’ orders, citing freedoms guaranteed by the Constitution.

Some among us still champion the value of liberty.