Christ and the Nazi Officer 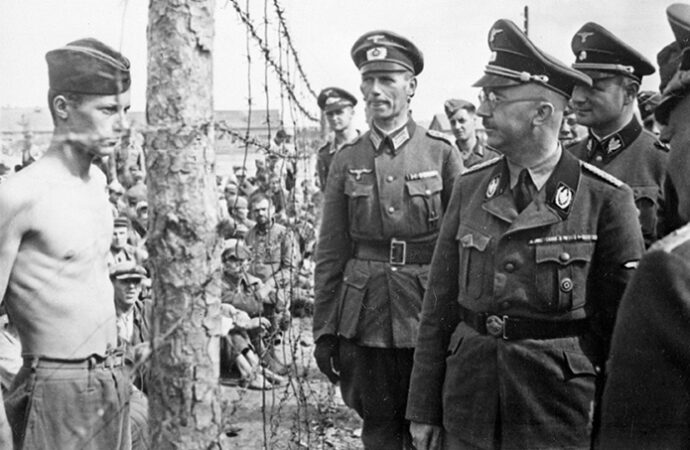 Christians, we often hear, are “so heavenly minded that they’re no earthly good.”

To be sure, there is some validity to this criticism. Plenty of Christians allow their faith in divine providence to override their responsibility to care for the world and for their neighbor. The way in which many Christians automatically dismiss all ecological concerns as bleeding-heart liberal nonsense provides one example. Taken to the extreme, this attitude views the world as a sinking ship and the only thing that matters is a spot on the heavenly lifeboat.

There are, however, other extremes to be feared. Those who look only to this world are often far more dangerous than those who despise it.

In a 2019 debate between psychology professor Jordan Peterson and Marxist philosopher Slavoj Žižek, Peterson made his customary appeal to individual responsibility and obedience to conscience: “Try to tell the truth, or at least don’t lie.”

Žižek was more skeptical. Identifying himself as a pessimist, Žižek questioned the power of the individual to resist evil when confronted with an ideology that calls evil good.

“[T]he danger here [is that]… totalitarian ideologies step in at this point and tell you that the true greatness is to do what you think is wrong for the higher cause,” he responded.

As an example, Žižek paraphrased Heinrich Himmler, the leader of Hitler’s fanatical private army, the SS. In order to motivate his officers, who ran the Reich’s concentration camps and organized mass executions across occupied Europe, Himmler told them that, “Every idiot… can do something great, sacrifice himself for his country, but… it takes a truly great man to be ready to lose his soul and to do horrible things for his country.”

Or, to use Himmler’s own words rather than Žižek’s paraphrase, “It is the curse of the great man to step over corpses.” It is nobler, according to Himmler’s reasoning, to achieve something by doing evil than to achieve nothing by doing good.

Žižek attributed a similar ideology to the Soviet political officers, who instructed soldiers that, when called upon to enact Stalin’s policy of forced starvation, they should ignore their guilty feelings of “bourgeoisie sentimentality.” It was, according to Soviet propaganda, their “highest ethical duty” to do so. The true Soviet hero was not the infantryman who fell bravely defending a wounded comrade, but the uniformed thug who could wrest a handful of grain from a starving child, load it onto a city-bound truck, and feel nothing. Versatile tools were valued above virtuous men.

For Nazis and Soviets alike, the ends justified the means. To refuse to participate in the necessary massacres was to betray the utopian future, be it Aryan hegemony or proletarian liberation. Conscience is weakness, and to follow it is cowardice. A clean conscience is a self-serving luxury. It might make you feel good, but it does nothing to advance the cause. It profits a man nothing if he forfeits the whole world but retains his soul.

This ethical system is the exact opposite of that preached by Jesus Christ. For Jesus, the ends did not justify the means; it would be more accurate to say that, for Him, the means justify the ends. He instructs His followers to “store up… treasures in heaven.” After all, any project – no matter how nobly utopian in aim – will inevitably be hijacked or corrupted by human imperfection. A transcendent ethic can restrain our earthly ambitions and encourage us when we fall short of them.

The true value of an action, Jesus taught, is not the effect it has on the world around you, but the kind of person it makes you into: “For what will it profit a man if he gains the whole world and forfeits his soul?”

In the end, it is the meek – not the shrinking violets that the word “meek” typically brings to mind, but those who refuse Himmler’s order to sacrifice their souls on the altar of progress – who will gain the whole world. The Kingdom of God is not a political ideology; it is a community of souls who have been “conformed to the image” of Christ.

Of course, not everyone overtly professes to follow either Christ or Himmler, but anyone who feels instinctively that conscience matters and that some crimes are unjustifiable regardless of their results is on the side of Christ in this dispute, whether they accept His messianic claims or not.

It is common to hear Christ’s followers derided for being too otherworldly, but the truth of the matter is much more paradoxical. Anyone whose only goal is to create heaven on earth by any means necessary is more likely to turn earth into hell. Only those who conduct their earthly work with an eye on the objective Goodness of heaven can serve the world, even turn it upside down, without destroying it.