Alena Pettitt: Defender of the Home and Tradition 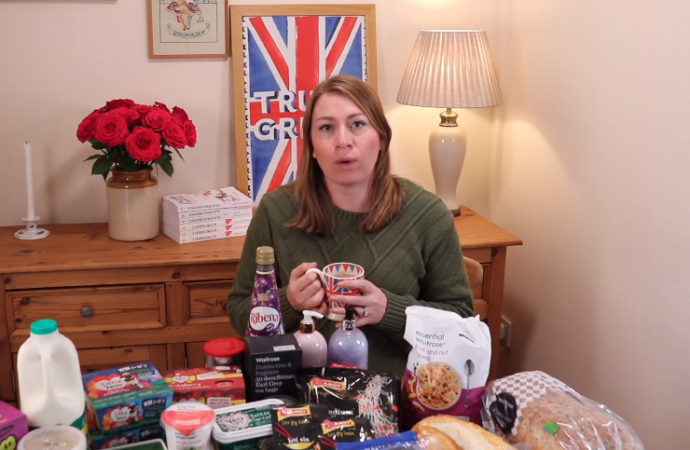 Enough of coronavirus. Enough of Joe Biden, Bernie Sanders, and Donald Trump. Enough of the headlines, at least for today.

Let’s jet off to England – while travel is still permitted there – and meet a bold woman: Alena Pettitt.

An article by Channaly Philipp of The Epoch Times introduced me to Pettitt, “a voice for traditional housewives.”

Pettitt, who lives in Gloucestershire, is the founder of The Darling Academy, a website that “celebrates the role of the housewife, traditional family dynamics, great homemaking, and shares the beauty of what makes ‘being at home’ truly worthwhile.” On this site and in other social media, Pettitt dispenses advice to homemakers on a variety of topics – cooking, etiquette, home decoration, marital relationships ­­– and offers encouragement to women who have decided to remain at home and raise a family. The author of two books, Ladies Like Us and English Etiquette, the 34-year-old Pettitt recently appeared on the BBC for an interview during which she supported the traditional housewife.

What followed was a minor firestorm of criticism. As Philipp writes, “housewives who spoke up in favor of their lifestyles and traditional values were denigrated as ‘extremists’ and as being ‘as misogynistic as men,’” and The Guardian drew links between traditional housewives and the alt-right movement, stating “it’s time to dial down a notch, tradwives, for your own sake.”

Meanwhile, many women who watched the interview praised Pettitt’s defense of homemakers, as did some of their husbands. “I’ve had husbands email me saying their wives saw me on TV,” Pettitt said, “and they’ve been depressed because they feel so devalued. But it was a glimmer of hope for them.”

Perhaps most surprising were the young single men who contacted Pettitt, explaining their desire for a family and their hope of finding a spouse who wanted to be a homemaker and raise children. Some of these correspondents even asked Pettitt if she could set them up on dates.

For many years, I taught seminars to homeschoolers in North Carolina, and so I knew many women who remained at home rather than seeking outside work. Some of these families were well-off; others had to watch every penny. Here in Virginia, there are many large families, primarily because of the conservative Catholic community, and again many of these wives and mothers are choosing to remain at home, taking care of their children and performing all sorts of household chores. A doctor recently told me that he and his wife have seven children, that she homeschools them, and that “She has the tough job.” That regard for his wife is common among other husbands I know.

Those who think of homemaking as leisurely work, or not work at all, are blind to what the job entails. Being at home with the children all day, keeping up with household duties, driving kids to everything from dental appointments to soccer, preparing meals: this job is anything but nine-to-five. The factory whistle blows when Mom falls into bed exhausted.

Some of these women take the art of homemaking to new heights. When we visit Pettitt’s website, we find a woman who clearly treasures beauty and order. She works hard to make her small home attractive, cooks healthy and delicious foods, and practices the etiquette she preaches. In addition to the lovely photographs, The Darling Academy contains scores of helpful articles on a vast array of topics related to marriage and family. We find in Pettitt an artist who creates beauty not on a canvas, but in life itself.

Rather than berating or belittling such women, we should be applauding them. They are raising the next generation, aiming for healthy marriages, and acting as a force for stability in our communities.

The women’s liberation movement exploded half a century ago. At that time, advocates of women’s lib encouraged females to enter the workforce, demanded equal pay, and sought to expand opportunities for women in such arenas as corporations, professional fields, and the military. These were worthy ambitions, and many women were soon pursuing them. Today more women than men attend law and medical schools, more serve in government than ever before, and more have chosen the workplace over being a stay-at-home mom.

In the beginning of that movement, one key issue for women was choice, the freedom to determine the path they wished to follow, to pursue goals which they themselves had set.

If circumstances permit, shouldn’t women have the right to choose to be homemakers without being harassed or mocked for that choice?