American Soldiers Are Not Bodyguards for Saudi Royals 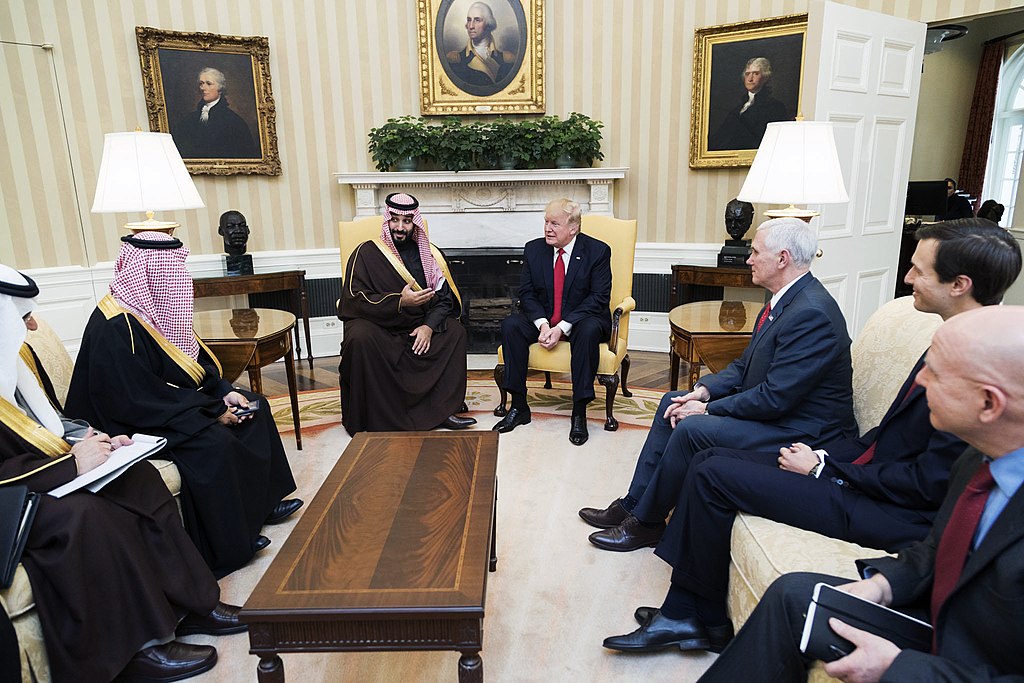 President Donald Trump believes in America First except when it comes to the Saudi royal family. Then it is Saudi Arabia first.

At the end of November, U.S. military leaders were in Riyadh negotiating the employment terms for the royal’s new bodyguards. That is, the plan for an expanded American military presence in the Kingdom of Saudi Arabia (KSA), including Patriot missiles, Sentinel radars, a THAAD air defense system, fighter aircraft, and other equipment, as well as personnel, who will eventually number around 3,000.

Why is the president, who has loudly insisted that allies do more to defend themselves, even more determined to handle Saudi Arabia’s security?

Of course, the royals themselves want American backing. Having grabbed control of their people’s wealth, they long have hired others to do the hard, unpleasant, and dangerous work – including the U.S. military.

The status-conscious KSA spends lavishly, especially on modern fighter jets. Last year Riyadh devoted $83 billion to the military. In 2017 defense expenditures ran $89 billion. That put the Kingdom in third place globally, after America and China. Alas, possession of fine equipment alone is not enough to ensure its good use.

In 2015 the Saudi regime attacked neighboring Yemen, one of the poorest nations on earth. De facto ruler Mohammed bin Salman, who became crown prince two years later, decided on war to reinstate a friendly ruler. Unfortunately, a campaign that was supposed to take a few weeks has lasted almost five years. Saudi pilots proved highly competent at slaughtering civilians, bombing weddings, funerals, hospitals, school buses, and markets. Humanitarian groups figure that three-quarters of the estimated 12,000 civilian deaths have resulted from air attacks – delivered by KSA aircraft provided, armed, guided, and, until recently, refueled by the U.S. The destruction of critical infrastructure has resulted in mass malnutrition and disease, which may have taken another 150,000 lives.

Nevertheless, the royals may prefer not to have a capable military, as it could threaten a system in which the few mulct the many. After all, who other than a prince receiving a state subsidy has much incentive to defend the corrupt, repressive, and decrepit monarchy? It might be worth joining the armed forces to collect a paycheck, but certainly not to risk one’s life on behalf of some man or woman (very) distantly related to the desert bandit named al-Saud who long ago defeated his rivals.

For the regime, the National Guard is most important, since its role is to protect the princely rulers from internal enemies. Also critical is the Pakistani military, which deploys upward of 20,000 troops in Saudi Arabia on “security duties.” Islamabad has found the arrangement to be profitable.

Although Trump criticized the Kingdom during the campaign, on taking office he promptly turned U.S. policy over to Riyadh. He apparently viewed the royals’ checks to munitions makers as de facto compensation for the Pentagon playing bodyguard. Yet the revenues are minor compared to America’s overall economy and offer little benefit to most Americans. Worse still, military cooperation entangles the U.S. in regional conflicts and Sunni-Shia confrontation, of which Yemen is the latest manifestation.

Now the U.S. role is further expanding. President Trump promised that the KSA would pay “100 percent of the cost” of the new deployment, but that doesn’t include the expense of creating the units being deployed. Even if it did, the Pentagon should not hire out personnel to rich states. The role of Americans in uniform should be to protect America, not to act as foreign mercenaries.

Incredibly, in Saudi Arabia the administration plans to spread Americans out geographically, effectively turning them into hostages. According to the Washington Post: “Military officials say one important aspect of the deployment is the presence of American forces in more locations across the Kingdom. They believe Iran has demonstrated its reluctance to target American personnel, either directly or indirectly, in part because Trump has made clear that would trigger a military response.” If the administration purposefully shelters the royals behind Americans, Tehran might take bigger risks.

There is no good policy reason for Washington to make the Middle East safe for monarchy. The region was never as vital as claimed, and it matters even less today. America’s domestic energy production has turned the U.S. into an exporter and eliminated reliance on Middle East oil. Other energy sources are being developed elsewhere in the world. Moreover, Israel is a regional superpower well able to defend itself. The next time the region is convulsed by revolution, conflict, or war, Washington almost certainly can best protect its interests by looking away and avoiding involvement.

Even decades ago the KSA did not matter as much for oil as most people assumed. Any regime would want to sell the resource. President Jimmy Carter declared the Persian Gulf to be a vital interest out of fear that the Soviet Union might try to seize control and deny oil to the West. That was January 1980. The Cold War is long over. The Soviet Union is long dissolved, and Russia is not an equivalent threat.

The presumed Iranian attack of September 14 on Aramco’s oil facilities in Abqaiq and Khurais demonstrated Saudi Arabia’s vulnerability, which is good reason for the Kingdom to end its counterproductive aggression against Yemen and concentrate on its own defense. Ditto for protecting oil transport. If any outsider should provide escorts for oil tankers it is those consuming the most Gulf oil, which isn’t the U.S. The Europeans and Asians should organize their own patrols.

More fundamentally, it is time for the Gulf royals – the Emiratis have been as aggressive as the Saudis in Yemen – to seek an accommodation with Iran. Perhaps America’s worst role in Saudi Arabia has been as enabler. American aid has made the Yemen war easier for the Kingdom. However, increasingly effective retaliation via drones by Houthi insurgents and the steady increase in cost, now estimated to exceed $100 billion, finally pushed Riyadh into talks with its Yemeni opponents. Negotiations begun in September resulted in the recent release of 128 Houthi fighters, which hopefully will spur talks to end the conflict.

Moreover, the dual shock of the September attack on the Kingdom’s oil facilities and President Trump’s refusal to retaliate militarily forced the royals to consider the need to provide for their own security. Karim Sadjadpour of the Carnegie Endowment for International Peace observed that “Saudi and UAE cynicism about Iran hasn’t changed, but their calculus of the U.S. has; they realize that Donald Trump doesn’t have their backs, and they need to fend for themselves.”

Tehran and Abu Dhabi already have met on maritime security. Kuwait and Oman long maintained ties to Iran, with which they urged the Kingdom to talk. Most recently, Iraq and Pakistan offered to mediate between Saudi Arabia and Tehran.

The Washington Post’s David Ignatius called this change a “cost of President Trump’s erratic policy,” but the willingness to seek a peaceful settlement is in America’s interest. Former defense secretary Robert Gates observed that the Saudis were prepared to “fight the Iranians to the last American.” But once the royals realized they might have to do the dirty work themselves, they discovered the appeal of peace. (They say they want the Iranians to stop “killing people” before the two governments talk, but Tehran could set the same condition, given the brutal Saudi slaughter in Yemen.)

Another reason for Washington to back away from the KSA is the latter’s virulent political, religious, and social repression, which is worse even than that in Iran. MbS, as the crown prince is known, has eliminated the slightest hint of dissent. He previously arrested commentators and bloggers whom he deemed insufficiently obsequious. Even as he relaxed strictures against women driving he imprisoned the women who led the protests.

November featured another crackdown. According to the New York Times: “Saudi Arabia’s long-running drive to muzzle dissent has escalated again in recent weeks with the arrests of several journalists, writers and academics who had not vocally criticized the government in years.” The repression reaches America. In November two Twitter employees – one a Saudi citizen, the other a Saudi national acting as an intermediary – were arrested for spying for Riyadh on regime critics. More than a year ago regime critic Jamal Khashoggi, an expatriate living in America and writing for the Washington Post, was murdered and chopped up by an assassination squad in the Kingdom’s Istanbul consulate.

The Saudi shift toward negotiation with Iran might yield a side benefit, forcing Washington to reconsider its failed approach to Tehran. “The anti-Iran alliance is not just faltering, it’s crumbling,” said Martin Indyk of the Council on Foreign Relations. That’s a good thing, since U.S. policy is what raised Middle East tensions to a fever pitch. Increased sanctions failed to force Tehran to negotiate, let alone surrender, as the president expected. Rather, Iran revived its nuclear activities, seized oil tankers, and attacked Saudi oil facilities. Better for Washington to engage Iran, seeking over the long-term to increase pressure for reform by offering economic opportunities and the prospect of a wealthier, freer future.

Washington’s tight embrace of the Saudi royals always was a mistake. The justification for even a looser association has dissipated over time. Today the relationship is frankly criminal, given the horrors being committed by Riyadh with U.S. assistance in Yemen.

The U.S. should bring its forces home from the Kingdom and shift Saudi Arabia’s defense burden back where it belongs, on the royal regime. If the president really believes in America First, he should stop putting Saudi Arabian interests before those of the U.S.