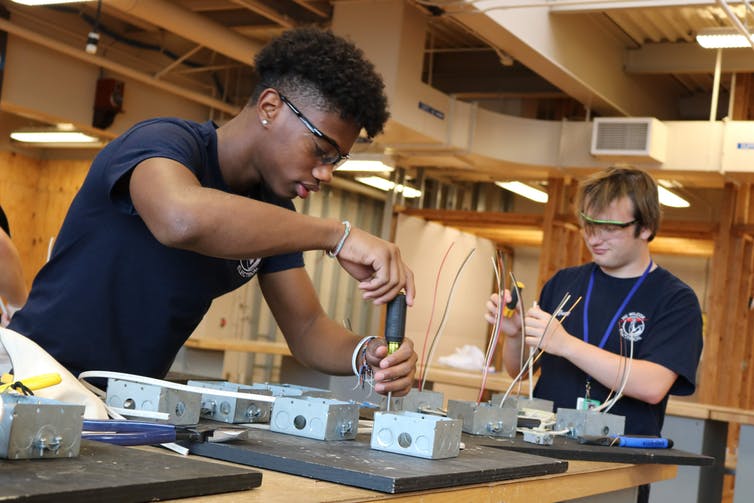 Job prospects for young men who only have a high school diploma are particularly bleak. They are even worse for those who have less education. When young men experience joblessness, it not only threatens their financial well-being but their overall well-being and physical health.

Could a high quality and specialized technical education in high school make a difference?

Based on a study I co-authored with 60,000 students who applied to the Connecticut Technical High School System, the answer is: yes.

To reach this conclusion, we studied two groups of similar students: Those who barely were admitted to the Connecticut Technical High School System and those who just missed getting in. Students apply to these high schools and submit things such as test scores, attendance and discipline records from middle school. Then, applicants are ranked on their score and admitted in descending order until all seats are filled. We compared those whose score helped them get the last space in a school, to those who just missed being admitted because the school was out of space.

This enabled us to determine whether there was something special about Connecticut’s Technical High School System education that gave students an advantage over peers who also applied, but didn’t get into one of the system’s 16 technical schools across the state.

Connecticut Technical High School System is a popular choice for students – about 50 percent more students apply than can be admitted.

The system functions such that students can apply to attend a school in the tech system instead of their assigned public school. Statewide, the system schools – which offer specialized instruction in a variety of career fields – serve about 10 percent of the high school students. Most students who don’t get into the tech schools stay in their public high school.

What we found is that students who were admitted to the Connecticut Technical High School System went on to earn 30 percent more than those who didn’t get admitted. We also found that the tech school students were 10 percentage points more likely to graduate from high school than applicants who didn’t get in – a statistically significant finding.

Our research suggests that expanding a technical high school system like the one in Connecticut would benefit more students. I make this observation as one who examines outcomes associated with career and technical education.

Career and technical education has already been shown – at least on an individual or small scale level – to positively impact earnings and high school graduation rates.

Our recent study finally answers that question because we studied an entire state technical high school system. Specifically, it shows that, yes, career and technical education can give students the same benefits that it has already been shown to give on a smaller level even if it’s scaled up. This has implications for school districts and states, especially as growing interest in what works in career and technical education.

The appeal of technical education in Connecticut

Once admitted into the Connecticut technical high school system, all students take career and technical education coursework instead of other electives, such as world languages, art or music. Typically, coursework is grouped into one of 10 to 17 programs of study, such as information technology, health services, cosmetology, heating ventilation and air conditioning, and production processes, among others. Traditional public high schools in the state, on the other hand, tend to offer at most four career and technical programs through elective courses.

In the Technical High School System schools in Connecticut, students explore various programs of study during their first year. Then – with help from an adviser – students select a program of study. Within these programs, students take at least three aligned courses and often more. They also have more opportunity to align academic and technical coursework materials, so that math and English content can often be integrated into technical courses. Chances for work-based learning and job exposure can also be enhanced in these settings, which may contribute to their impact.

We found that – compared to students who just missed being admitted – technical high school students had:

• Higher 10th grade test scores (like moving from the 50th to the 57th percentile, which is a significant jump for high school test scores)

• A greater likelihood of graduating from high school, about 85 percent versus 75 percent for those who just missed being admitted

• While we found a lower likelihood of attending college initially, no differences were seen by age 23

As educators, elected officials and parents search for more effective ways to give young men in high school a better shot at being able to earn a living, our study suggests that Connecticut might have already figured it out.