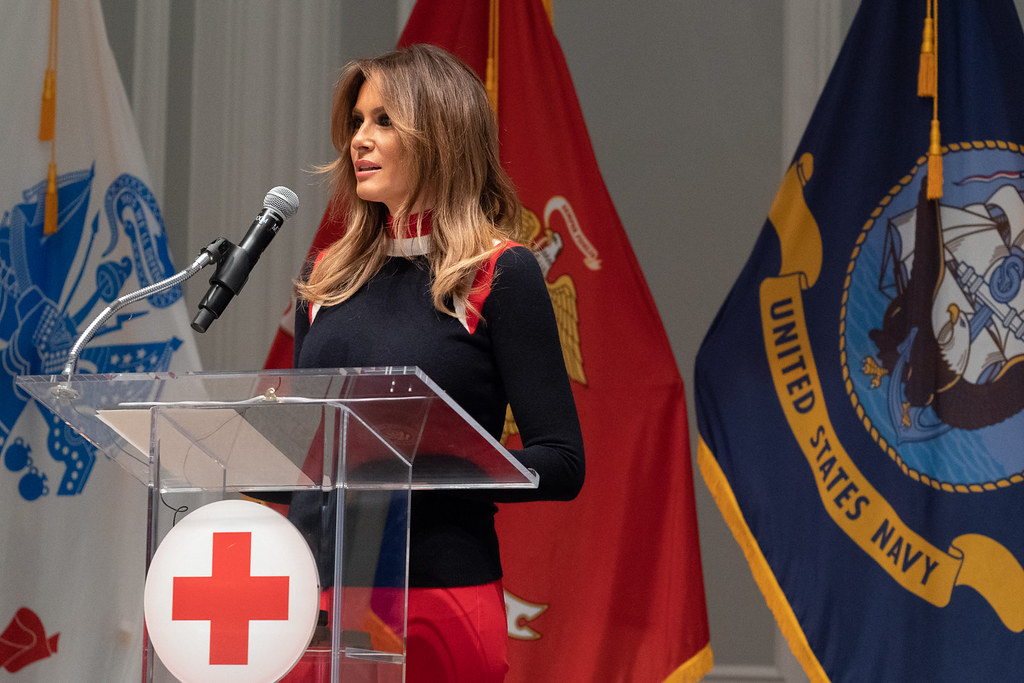 Recently, my friend John and I were discussing intelligence and the media. “Find any picture of reporters with that woman,” John said, “And you’ll see she’s the smartest person in the room.”

“That woman” was Melania Trump.

I only knew a little about Melania Trump, so I thought I’d do some digging.

She speaks six languages: English, French, German, Italian, Serbo-Croatian, and Slovenian. That’s four or five more languages than most of us can handle.

She was born in a Communist country, worked her way into the world of modeling, immigrated to the United States, continued modeling, married a wealthy entrepreneur, and founded lines of jewelry and skincare products.

While so many of us appear in public in sweats, t-shirts, and gym shorts, Melania Trump displays exquisite taste, always looking as if she just stepped off a fashion show runway.

She has made her son, Barron, a centerpiece of her life. She delayed moving into the White House so that he could complete his school year at Manhattan’s Columbia Grammar and Preparatory School.

As First Lady, she has shown a particular interest in helping children, speaking out against cyber-bullying and founding Be Best, an awareness campaign to encourage children in all aspects of their lives. She seems most comfortable in public visiting children in schools and hospitals, bringing them gifts and taking the time to talk with them.

Nonetheless, over the past three years she has endured torrents of abuse from the mainstream media and other Trump haters, assaults on everything from her Christmas decorations in the White House to mockery of her accent and clothing. When she recited the Lord’s Prayer at a rally in Florida in 2017, she was ridiculed for her delivery and branded by some as a “whore.” She once told CNN she felt she was one of “the most bullied people in the world.” Impartial observers might agree with her.

According to one source, the White House staff adores Mrs. Trump for her thoughtful interactions and consideration on a daily basis.

When she travels overseas or meets with foreign leaders in the White House, she behaves with dignity and decorum, and is an excellent representative of the United States.

Perhaps most admirable of all, the First Lady is a quiet person who keeps her private life hidden as much as possible. In a time when so many want the spotlight, here is a woman who makes a virtue of restraint. That rare reticence adds to her mystery, setting her apart from other recent first ladies.

Which brings me to a broader topic: admiration and emulation.

We live in a peculiar age, an epoch shorn of past heroes who by their idealism, courage, and morality once inspired the rest of us. Figures like George Washington, Florence Nightingale, Booker T. Washington, and a hundred others are neglected in our schools, or deconstructed by academia and cast aside as unworthy of respect.

People we might emulate still live among us, but all too often we dissect them to death, stressing their flaws and suppressing their virtues. Both progressives and conservatives play this game, attacking their opponents not only for their ideas and proposals, but on their character as well.

Sometimes these personal assaults are deserved, as when a public official lies or a minister who advocates marriage from the pulpit is unveiled as an adulterer. In other circumstances, however, these attacks are so petty and low that the perpetrators should be ashamed of themselves.

In October 2019, for example, The Washington Examiner reported that some members of the press and various bloggers attacked Donald Trump for claiming during a press conference with Italian President Sergio Mattarella that “the United States and Italy are bound together by a shared cultural and political heritage dating back thousands of years to ancient Rome.”

Even a casual student of American history knows that the Founders of our country and drafters of our Constitution studied Roman law and history and used that knowledge as the basis for our government. They read and admired Romans like Marcus Aurelius, Livy, and Cicero. George Washington was called the “American Cincinnatus,” and many of the buildings and statues in our nation’s capital and around the country are modeled after Roman art and architecture.

Our heritage is Greco-Roman and Judeo-Christian. We can deny that heritage, and we can topple our past as we do the statues of those historical figures now deemed politically incorrect, but Donald Trump was absolutely on target: Americans have a connection to Ancient Rome.

On we go, knocking down rather than building up, eager to detect flaws in men and women, smearing and doxxing our enemies, and misinterpreting, sometimes deliberately, what someone has said because our heads are too stuffed with rebuttals to listen to them.

As for the refined and classy Melania Trump, what if the rest of us emulated her sense of dignity and her quiet way? Might not the baying chorus that fills our public forums with cheap shots and misinformation grow a little less raucous?