The U.S. Census Bureau released new poverty data this month, and California once again has the nation’s highest poverty rate, according to the “Supplemental Poverty Measure.”

According to the SPM, California’s poverty rate in 2018 was 18.1 percent, followed by Louisiana with 16.5 percent, and Florida with 16.2 percent.

The states with the lowest poverty rates per the period were Iowa at 6.7 percent, Minnesota at 7 percent, and Kansas at 7.8 percent.

The 2018 report shows a slight general decline in poverty rates throughout the nation in recent years. According to the 2015 report, for example, California’s poverty rate was over twenty percent, and the state with the lowest poverty rate — Minnesota — was at eight percent. 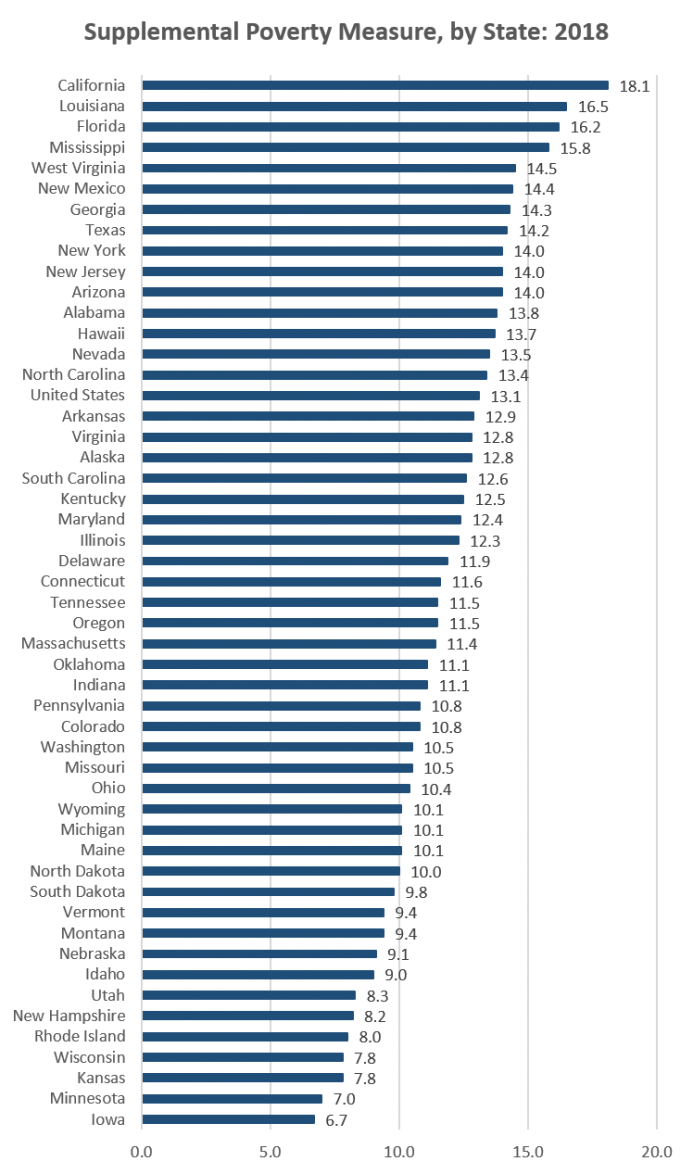 The SPM measure contrasts with the old “official” poverty measure developed in the 1960s. The old measure tends to apply a blanket standard for poverty nationwide, but the SPM takes into account local housing costs and also “extends the official poverty measure by taking account of many of the government programs designed to assist low-income families and individuals.”

Using the old measure, California ranks considerably better, because, of course, nominal incomes in California are considerably higher than in rural states and many other regions with much lower costs of living. Poverty rates in places like Mississippi, Louisiana, and New Mexico tend to be driven by low worker productivity, low-education levels, local corruption, and unfriendly business environments. But, the cost of living in these areas also tends to be relatively low, mitigating the effects of lower incomes. 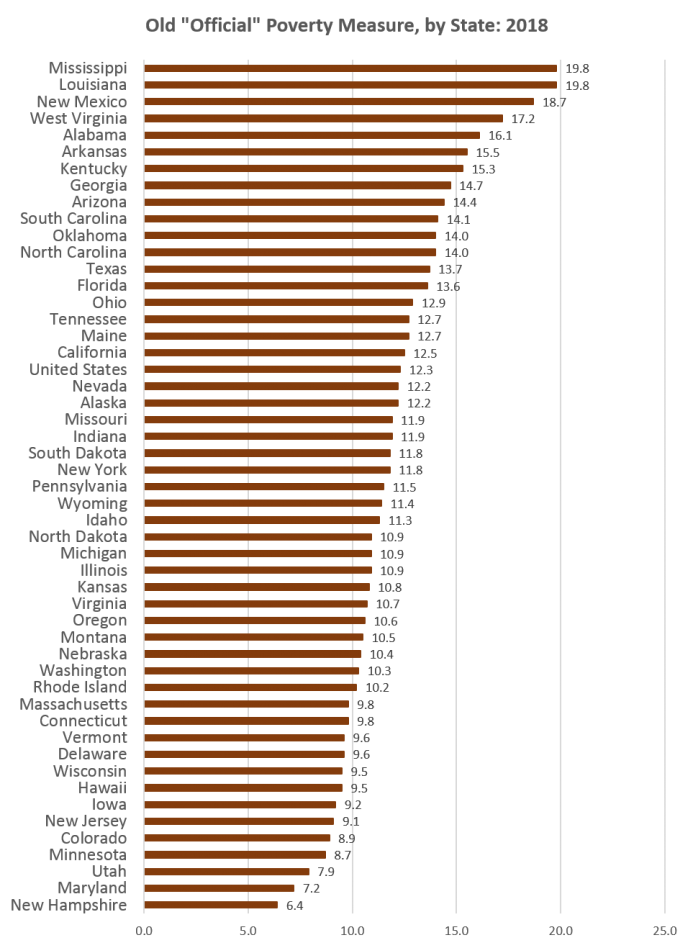 The situation is different in California where relatively high wages are often negated by very high living costs. And not surprisingly, California often dominates lists of the least-affordable housing markets in the United States.

The homelessness data coming out of California is also among the worst.

When it comes to homeless persons as a percentage of the overall population, California is the fourth-worst in the nation, behind only New York, Hawaii, and Oregon. One-third of a percent of California’s population (or 33 people per 10,000) is estimated to be homeless on any given night, according to the Point-In-Time survey of homelessness. 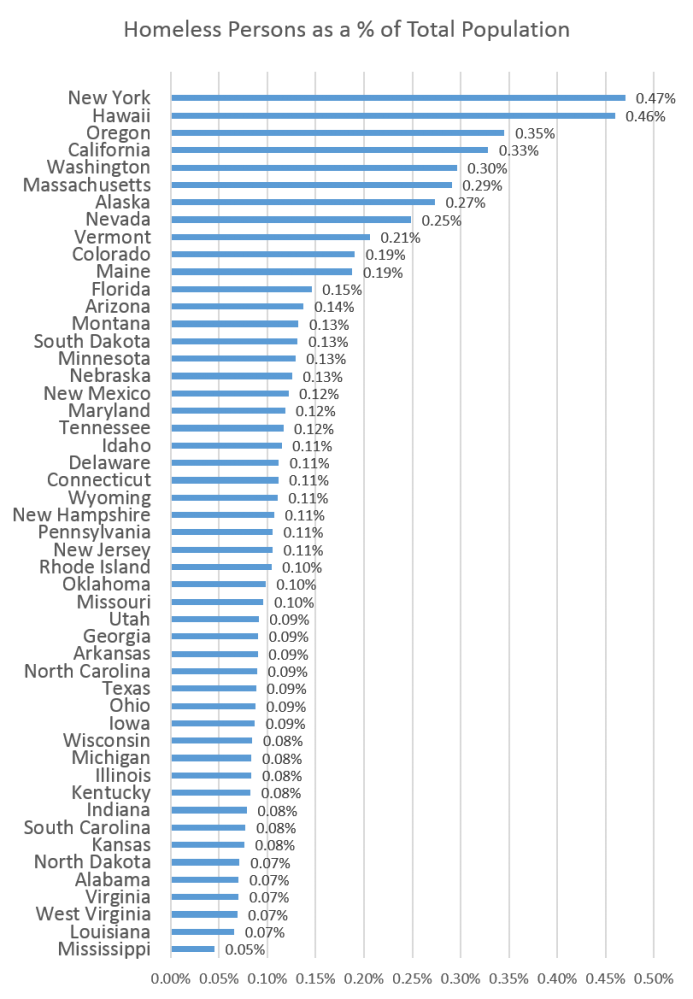 And while California is not the worst in terms of the proportion of the population that is homeless, the state is among the worst in delivering state services designed to lessen homelessness overall. Among the top-ten states with the highest percentage of homeless, California has the highest number of unsheltered homeless.1 Nearly 69 percent of the homeless population in California is estimated to be on the street. Massachusetts, by contrast, provides shelter to over 95 percent of its homeless population. Unsheltered homeless are also far less likely to receive treatment for mental illness or urgent health issues. 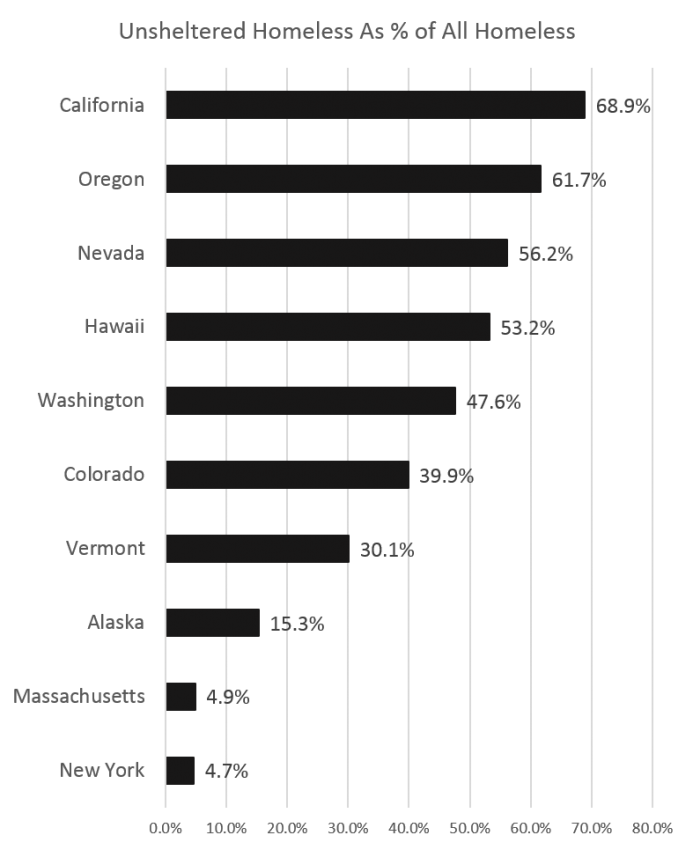 The importance of housing costs to the issue of homelessness is made more clear when we note that chronic homelessness is only a fraction of the total homeless population. It is sometimes suggested that the cost of housing is a not a significant factor in homelessness because most homeless persons — it is claimed — are mentally ill persons incapable of paying even a small rental fee.

The truth, however, is that in most cases, well over two-thirds of the homeless population is temporarily homeless. Many of these are families, many of whom have been evicted from housing due to missed rent payments, lost jobs, and other temporary situations. These events are made far worse and longer lasting by high rents and high housing prices. In California, for instance, only 26 percent of the homeless are chronically homeless. Most homeless people are people engaged in a search for permanent housing. 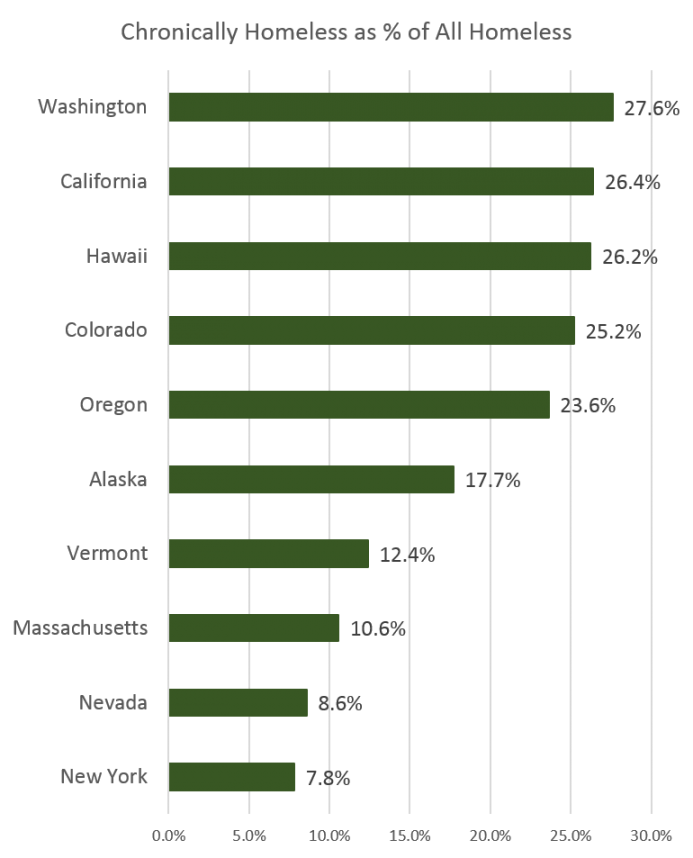 Thanks to numerous land use, environmental, zoning, and building code restrictions imposed on builders in California, however, the cost of living remains extremely high in the state. The tax burden is among the highest in the nation, putting many middle-class earners far closer to the poverty line in case of temporary job loss. Even non-housing costs are well above most other states.

California may be the land of Silicon Valley billionaires, but thanks to the state’s regulatory environment, the prosperity is rarely felt by people of more ordinary means. Wealthy residents don’t want their views obstructed, and they don’t want to have to look at low-cost housing on their drives to work. So, they work to ensure that government regulations minimize new housing construction, thus further driving up housing prices and rents. New housing construction isn’t keeping up with population growth.

High taxes are a burden on the middle and lower-middle classes. Regulations make it harder to start and sustain a business.

Not surprisingly, the result is a state with the highest poverty rate in the nation and the nation’s fourth-largest homeless population per capita.

Why the Cost of Living Matters

Although the SPM measure of poverty clearly provides a broader measure of poverty incorporating both social programs and housing prices into calculations, many leftwing columnists insist on using the older poverty rate measure — while ignoring the homelessness data — because the older measure makes states like California look better.

For example, wealthy investor Ken Fisher, writing in USA Today, claimed last year that the “poorest states have Republican legislatures, and richest have Democratic ones.” He writes: “Eighteen of the 19 poorest states have legislatures where both chambers are Republican controlled. New Mexico (46th richest, fifth poorest) is Democratic. But there isn’t another blue or purple state until you get to purple Maine… But all five richest states have both legislative chambers controlled by Democrats – Maryland, New Jersey, Hawaii, Massachusetts and Connecticut. Overall, Democrats dominate the 20 richest states.”

Fisher was using rankings published earlier by USA Today, which relied heavily on the old poverty rate measure, and which used nominal median incomes not adjusted to local cost of living factors. If we do make that adjustment, things look very different.

Fisher’s analysis thus relies almost totally on nominal income numbers, and ignores how expensive it is to live in places like New York and California.

For most regular people, however, leaving California may be the best thing one can do to increase one’s real income and have a chance at a life that doesn’t involve working long hours to afford a fixer-upper that costs half-a-million dollars.

There is, after all, a reason California is exporting its poor to places like Texas.