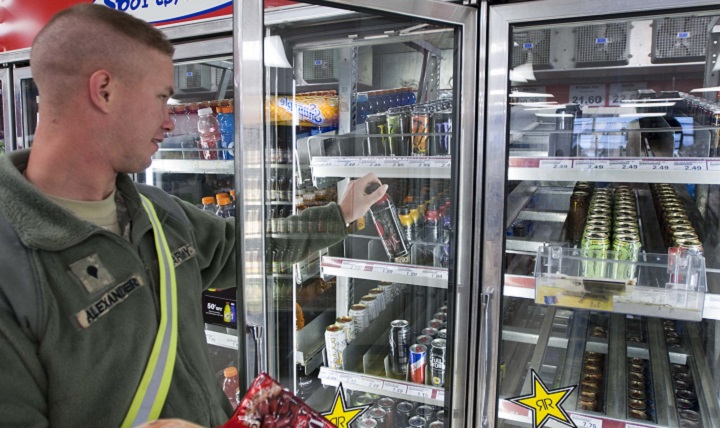 Recently I was drinking a can of Rockstar to get myself through a morning staff meeting. I thought nothing of the usual ribbing about my caffeine dependency, until a co-worker labeled Rockstar as the energy drink of the bourgeoisie.

“Are you kidding?” I asked. “I can get this stuff on sale for a dollar a can. Red Bull is the expensive one.”

That got me thinking about the class system of energy drinks. They align quite well with the four classes laid out by Karl Marx and Friedrich Engels in The Communist Manifesto.

It has agglomerated production, and has concentrated property in a few hands. The necessary consequence of this was political centralisation… The bourgeoisie, during its rule of scarce one hundred years, has created more massive and more colossal productive forces than have all preceding generations together.

Red Bull was founded by Austrian entrepreneur Dietrich Mateschitz and Thai businessman Chaleo Yoovidhya in 1984. On a trip to Thailand, Mateschitz discovered Yoovidhya’s drink, Krating Daeng, which helped cure his jet lag. Mateschitz tweaked the formula for western tastes, and the two businessmen started the company with $1 million. Red Bull sold 6.79 billion cans across the globe in 2018.

Energy drinks were the start, but now Red Bull dominates other industries. They own five soccer teams in four countries, including the New York Red Bulls and RB Leipzig in Germany. Other sports ventures include hockey, basketball, and Formula One. The company also owns a record label.

In countries where modern civilisation has become fully developed, a new class of petty bourgeois has been formed, fluctuating between proletariat and bourgeoisie and ever renewing itself as a supplementary part of bourgeois society.

While Monster Energy also sponsors sporting events and musical tours, their events are stereotyped as suited for the lower classes. Monster sponsors NASCAR instead of Formula One. Monster is headquartered in a suburb of Riverside California, while Red Bull calls the palatial Habsburgian Austrian countryside home.

Nevertheless, Monster Energy harbors bourgeoisie aspirations. It has an intense history of trademark protection lawsuits, targeting smaller businesses that utilize words such as “monster” or “beast.” This includes a microbrewery in Vermont with a beer called “Vermonster.” Just another example of big business quashing the proletariat.

Thus the proletariat is recruited from all classes of the population. The proletariat goes through various stages of development. With its birth begins its struggle with the bourgeoisie. At first the contest is carried on by individual labourers, then by the workpeople of a factory, then by the operatives of one trade, in one locality, against the individual bourgeois who directly exploits them.

Advertised as “twice the size of Red Bull for the same price,” at 16 ounces and far more caffeine, Rockstar is an energy drink for the people! As Marx would have hoped, the company is able to bring together all sorts of perspectives and people.

Rockstar was founded in 2001 by Russell Weiner, the son of conservative talk show host Michael Savage. Despite his conservative connections, Weiner attempted to donate $25,000 to San Francisco Mayor Gavin Newsom’s reelection campaign. It was returned.

Consisting of a smaller percentage of the American energy drink market, Rockstar does sponsor some music and action sports events, but nothing on the scale of its larger competitors.

The ‘dangerous class,’ the social scum, that passively rotting mass thrown off by the lowest layers of old society, may, here and there, be swept into the movement by a proletarian revolution; its conditions of life, however, prepare it far more for the part of a bribed tool of reactionary intrigue.

One of the earliest American energy drinks, Jolt Cola was introduced in 1985 as a highly caffeinated beverage with the slogan, “All the sugar, twice the caffeine.”

Production of Jolt lasted until 2009, when it filed for bankruptcy. As the recession hit, the company couldn’t fulfill its contractual obligation to buy 90 million of its distinctive resealable cans.

Jolt still enjoys a cult following, rising from the “lowest layers of old society” in 2017 through a reappearance at Dollar General Stores.

There you have it, four classes as understood by Communists, and the energy drink each ought to prefer. To paraphrase Marx and Engels:

Let the ruling classes tremble at a Communistic revolution.
The proletarians have nothing to lose but their sleep.
They have a world to win.

Working men of all countries, caffeinate!