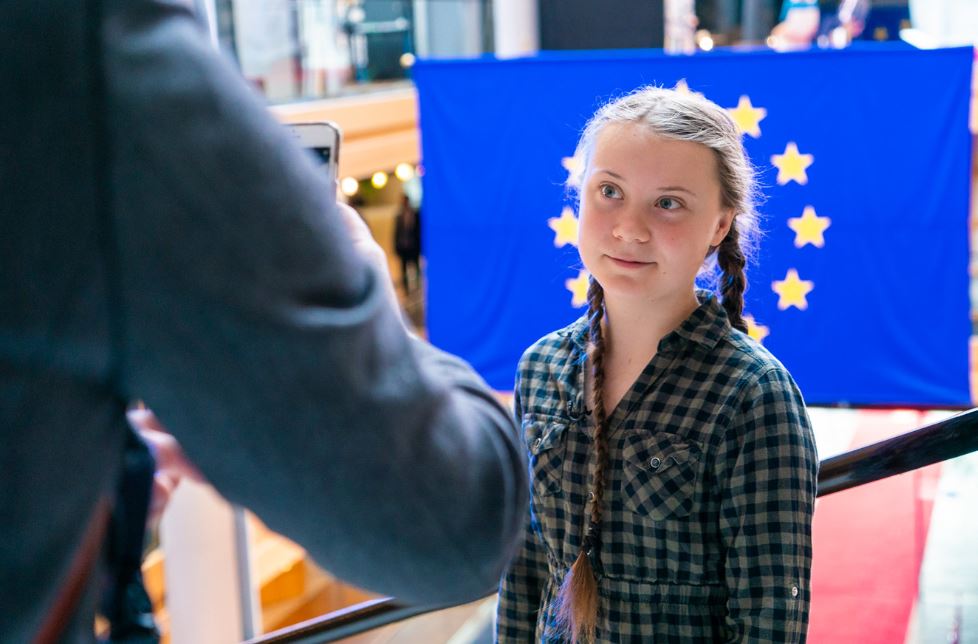 On Friday, schoolchildren around the world will be prompted to walk out of class as part of the “Global Climate Strike.” These young “climate strikers” will protest alleged inaction on climate change and promote an end to fossil fuel use.

“Our house is on fire – let’s act like it. We demand climate justice for everyone,” the event’s website warns.

It is the latest stunt orchestrated by the international climate cabal and yet another example of how the left shamelessly exploits and manipulates children to propagandize any cause. (Think of the high school students in Parkland, Florida.) But this time, the climate cabal is using a special-needs teenager from Sweden to indoctrinate more children and adults with climate change dogma.

Greta Thunberg is a 16-year-old from Stockholm – which is ironic because the teen exhibits many traits associated with a hostage attempting to please her captors.

In a way, Thunberg is not the face of a climate crisis but an alarming example of how the climate cabal has needlessly terrified two generations of young people. The emotional, physical, and intellectual damage wrought by the climate change movement now is coming into clear view and it’s an outcome that should enrage every parent.

Watching Thunberg speak evokes a combination of sadness, pity, and anger. She’s diminutive and far more childlike in her mannerisms and presentation than a typical teenager. It’s unclear whether she truly grasps the issue she is promoting – what is clear is that many adults are using her to generate sympathy and support for a dangerous crusade that they, as grown-ups, cannot carry out on their own.

Thunberg, the story goes, became so distraught over climate change that she briefly dropped out of school in 2018 to protest the Swedish parliament. Her climate trauma began at age 8, when she first started hearing tales of climate doom at school.

“When I was 11, I became ill,” Thunberg admitted during a November 2018 TedTalk. “I stopped talking and I stopped eating. Later, I was diagnosed with Asperger’s syndrome [a form of autism], OCD, and selective mutism.”

She calls her disorder a “super power” and insists that autistic people are the “normal ones and the rest of the people are pretty strange, especially when it comes to the sustainability crisis.”

During a tormented address before the European Parliament in April, Thunberg began sobbing while reading off a prepared script about soil erosion, deforestation, and the loss of insects. (Any decent parent would have snatched her off the podium, never to return her to the public stage again.)

“If our house was falling apart, you wouldn’t hold three emergency Brexit summits and no emergency summit regarding the breakdown of the climate,” she scolded.

In less than a year, Thunberg has reached a level of international fame that even the greatest young talent could only dream of, no doubt in large part because of her parents’ celebrity. (Her mother is a famed opera singer and her father is an actor and author.) She has more than 1.4 million Twitter followers, has been profiled in every major newspaper, and is regularly interviewed on cable and network news programs. She even appeared on “The Daily Show.”

Thunberg traveled from Europe to New York in a luxury yacht last month in a move that sparked both praise and controversy since her adult companions planned to jet back to Europe after the stunt. (After attending the U.N. Climate Conference in New York next week, the teen activist plans to travel to Canada, Mexico, and Chile then back home, but doesn’t know what form of transportation she will use for her trans-Atlantic mission.)

President Obama hosted Thunberg in his office on Monday. “You and me, we’re a team,” Obama told the girl after an awkward and clearly scripted exchange in his office. He commended her for “changing the world.”

The young Swede then enjoyed an opportunity that 99.99 percent of American teens will never get – an appearance before a House committee on Capitol Hill. She lectured U.S. lawmakers, accusing them of ignoring the “existential crisis” of climate change. “I want you to unite behind the science, then I want you to take real action,” Thunberg commanded on Wednesday. “You’re not trying hard enough.”

Another young climate activist, Seattle teenager Jamie Margolin, told the House Foreign Affairs committee about her climate-induced angst. “I want the entirety of Congress, in fact the whole U.S. government, to remember the fear and despair that my generation lives with every day,” Margolin whined. “How do I even begin to convey to you what it feels like to know that within my lifetime the destruction that we have already seen from the climate crisis will only get worse?” Thunberg and Margolin later snapped pictures with Representative Ilhan Omar (D-Minn.)

While Thunberg enjoys stardom because of her climate-induced panic – and thanks to major financial backing from green energy interests – others suffer in silence.

“Eco-anxiety” is afflicting millions of young people around the world as a result of the catastrophic future portrayed by the insidious climate cabal. Teens and young adults live in a constant state of fear over the environmental impact of every decision they make, from using plastic straws to driving a car to eating meat. Miley Cyrus, a onetime idol of many of today’s teenage girls, is warning them not to have babies in the future in order to save the planet.

A 2017 paper co-authored by the American Psychological Association details all the maladies associated with climate change, especially its alleged harm to children. “Climate impacts may have long-term and even permanent effects, such as changing the developmental potential and trajectory of a child,” the report claimed.

This weekend, more children will be brainwashed with climate orthodoxy at the first-ever Youth Climate Summit at the United Nations headquarters in New York. The event will feature “a full-day of programming that brings together young activists, innovators, entrepreneurs, and change-makers who are committed to combating climate change at the pace and scale needed to meet the challenge.” Thunberg will speak at that event as well as the U.N. Secretary General’s annual climate summit on Monday.

It would be easy to ignore Thunberg as the climate cabal’s latest pawn, but every parent should pay attention. Thunberg (not to mention millions like her) is the product of more than two decades of dangerous climate propaganda. They are hostages to their adult climate captors – from presidents to celebrities to teachers and religious leaders.

Thunberg is indeed sending an important message, however, it is not the one her promoters intend. She is a cautionary tale of what lies ahead if adults don’t start pushing back against climate propaganda. Sadly, it might already be too late. It’s certainly too late for Greta Thunberg.