Why the Minimum Wage Can’t Solve the Poverty Problem

If wages for those at the bottom are high, you may naturally expect low poverty rates. No matter how you define it, higher wages would most logically relieve poverty levels. This is also the argument made by the Economic Policy Institute (EPI). An increase in the minimum wage may very well reduce poverty in the short-term. However, there will be adjustments. In reality, a higher minimum wage changes the types of people living in poverty rather than the overall number.

A higher minimum wage will help those who have a job but not those who are unable to find employment. This favors more skilled and experienced employees who are generally more productive. To an employer, it is more justifiable to employ someone with experience. They are generally able to produce a greater level of output with a higher degree of quality. At the same time, this creates a trap. To the employee, there is less incentive to move on to more productive and higher paid positions.

What we see is the employee getting paid more. What we don’t see is the loss of their potential output. Not only is there reduced incentive, but there is also reduced opportunity. Many businesses are already moving to flatter business structures. This means fewer opportunities to progress to managerial positions. We are already seeing the likes of Walmart and McDonalds moving toward this kind of structure.

Though employees on the minimum wage are getting paid more, social mobility suffers. For example, research by Neumark and Nizalova found negative long-term effects from the minimum wage. Their study concluded that the minimum wage had two restricting effects. First, it restricts teens and young adults by deterring their employment. This means they are unable to acquire the necessary employment skills at a young age. Second, employers compensate for the higher wage by reducing their investment in training. Once again, this reduces the long-term skills that teens and young adults gain. Consequently, the ability to move onto more meaningful employment is restricted.

Furthermore, research by Clemens and Wither also found significant declines in economic mobility as a result of the minimum wage. Their study reiterates the conclusions of Neumark and Nizalova. The reduction in upward mobility is largely due to the reduction in opportunities for accumulating work experience.

The minimum wage reduces social mobility, but does it reduce poverty? Media outlets like CNBC are quick to highlight that the minimum wage hasn’t kept up with inflation. If it had, it would be nearly $11. So the minimum wage has lost much of its value since its peak in 1968. If there were a link between the minimum wage and poverty, we would expect higher poverty rates today. However, the opposite is true.

The African-American poverty rate declined from 34.7 percent in 1968 to 21.4 percent in 2016. For whites, it declined from 10 percent to 8.8 percent in the same period. The main contributing factor to this decline is economic growth and the availability of jobs, not a higher minimum wage.

Data from the US Census Bureau stated that 12.3 percent of the population lived in poverty in 2017. That’s roughly 39.7 million people. Of those, 17.2 percent, or 6.9 million people, were considered “working poor.” However, when only those who were continuously employed over the previous year were included, it fell to 5.3 million. Of those, 3.2 million were in full-time work below the poverty level.

The minimum wage was raised three times between 2007 and 2009. However, this came during one of the worst recessions on record. The last economically stable period where the minimum wage increased was 1996 to 1997. It increased to $5.15 in 1997, equal to $7.87 in 2017 prices. While the inflation-adjusted rate declined, the rate of in-work poverty also declined. The number of workers who were employed all-year round but still in poverty fell from 1.96 percent of the population in 1998 to 1.64 percent in 2017. 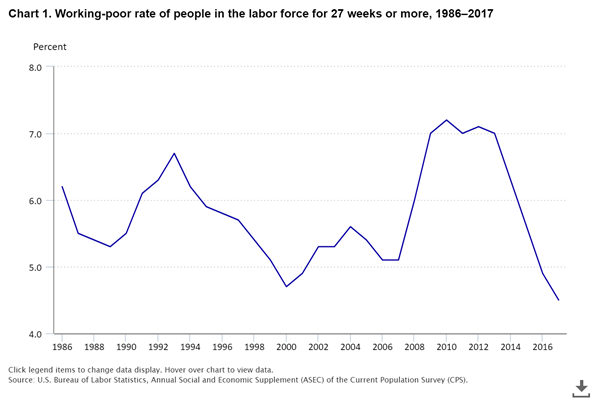 The percentage of people in working poverty is at record lows despite the minimum wage remaining stagnant at the federal level. This has not detracted from the prominence of the debate. Over the last 20 years, however, there has been an adjustment among the “working poor.” That adjustment has been a shift toward part-time work. While 30 percent of the working poor worked part-time in 1998, 40 percent did in 2017. The majority of this has come through voluntary means, which is to say that people are classified as suffering from “in-work poverty” through their own free will. Usually, this is because their household income is actually in excess of the poverty level. The minimum wage job is therefore but a supplementary income.

Raising the minimum wage won’t help those on part-time work out of poverty. It won’t help the other 34.4 million, either. Many of those are either disabled, unemployed, or children. In fact, it may very well make the situation worse. Employment is the best way out of poverty, but raising the minimum wage makes it that much more difficult for low-skilled workers to obtain that employment.

Single-mothers and their children are most at risk of falling into poverty. Many require job flexibility to fit around child care. Raising the minimum wage will make it easier for businesses to pick workers who are more able to fit around their working hours, leaving single mothers without employment.

What’s more, many of those 3.2 million in working poverty include tipped workers. The trouble with this is that it overestimates the figure. All tipped workers earning below the minimum wage will be included, but so will those who are actually earning above the poverty rate. The number of people in working poverty falls further when we include tips. Furthermore, such statistics do not include cash transfers such as tax credits or housing benefits. Once these are included, the actual figure falls further. So, the statistics provided are often misleading and drastically overstate the problem. This is an important point because a higher minimum wage is sold as a way to help millions out of poverty. The reality is that it only benefits a small minority to the cost of everyone else. Even then, that small minority will see their hours reduced as a result, leaving everyone worse off.