Who Wants to ‘See Them Aliens’? 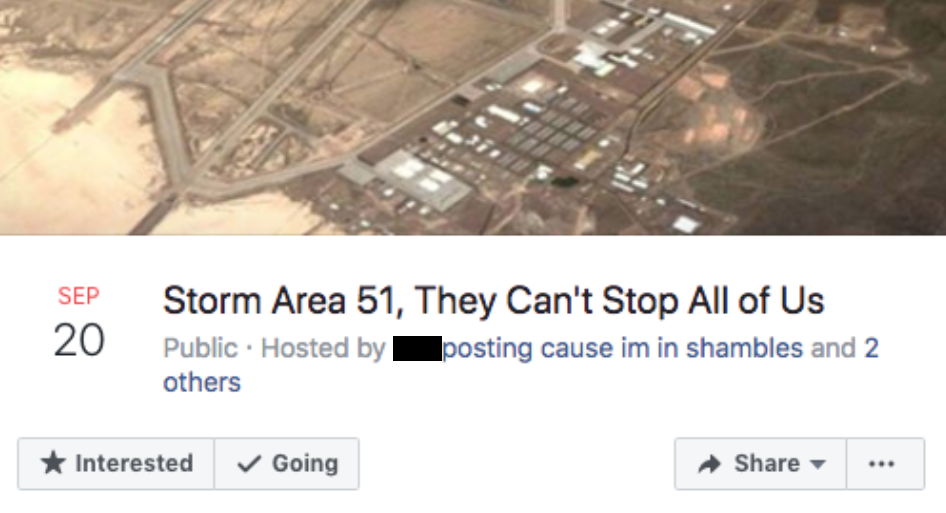 Over 1.3 million people have RSVP’d as “Going” on Facebook to an event titled “Storm Area 51, They Can’t Stop All of Us.” An additional one million people are “interested.”

The event details note that anyone who plans to participate and “see them aliens” should meet at the Area 51 Alien Center tourist attraction, a combined gas station and diner which supposedly has an alien-themed brothel next door. The actual storm is set to take place between three and six A.M. The details also note that if the participants “Naruto run,” (with their arms behind their back) they “can move faster than their [the government’s? the aliens’?] bullets.”

The three event organizers have also created an independent website where they are selling souvenir t-shirts with phrases such as “I survived Area 51,” “I was born on the wrong planet,” and “I saw them aliens.”

Laura Andrews is not the only government official to make comments that breed conspiracy theories about Area 51. A former pentagon official, Luis Elizondo, said that he believes in the possibility of aliens. Just this summer, a group of senators were briefed on “unidentified aircraft” – which some people think are UFOs. Even President Trump admitted that he had a UFO-related meeting. However, he went on to say that he does not believe in UFOs.

The government has not always acknowledged the existence of Area 51, nor the fact that they are looking into anything UFO or alien related. This lack of transparency probably helped give rise to the conspiracy theories that abound today. In fact, it was only in 2013 that the CIA released previously classified documents which did indeed confirm the existence of Area 51 and its history.

During World War II, the U.S. military used Area 51 for routine military activities. However, the CIA revived the area during the Cold War Era and used it to develop the U-2 and A-12, both high-altitude reconnaissance planes, as well as the F-117, a stealth fighter. The development of these crafts were highly classified projects.

Bob Lazar is still around and active in the UFO world. He is the subject of the 2018 Netflix documentary titled Bob Lazar: Area 51 & Flying Saucers. It does not seem like a stretch to wonder if the documentary, released only 7 months ago, served as the inspiration for the upcoming storm.

Even if he did serve as the inspiration, Bob Lazar publicly denounced the idea on Instagram:

“I have to comment on this ‘Storm Area 51’ thing. I do understand it was started as a joke by someone, but there are a number of people who are actually planning on showing up. This is a misguided idea. Area 51 is a classified research base. There are no aliens or alien technology located there. The only place there was ever any alien technology was at Site S4, south of Area 51 proper. That was 30 years ago. S4 may have moved decades ago or it’s possible it’s no longer being used for the project. …”

However, the 2.3 million people who have demonstrated interest in the storm are apparently choosing not to heed Lazar’s warning.

Conspiracies surround Area 51 whether or not aliens and UFOs are in the equation. And even though the event is a joke, it does a good job of exposing the curiosity of 2.3 million Americans. It also reveals that over 2.3 million Americans can find common ground in alien conspiracy theory humor. Hopefully the 2.3 million will be able to get some answers to their questions later in the morning on September 20.