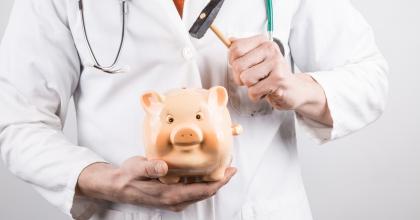 The rising cost of healthcare is undermining the American Dream. Families who are working hard to get ahead now pay nearly $20,000 per year in insurance premiums, deductibles, and out-of-pocket costs for healthcare.

These powerful institutions are organized as public charities – not as for-profit corporations. Any profits must be re-invested into their charitable mission, yet last year, their combined net assets increased from $164.2 billion to $203.1 billion – that’s 23.6 percent growth.*

Meanwhile, their executives are highly compensated. Collectively, $297.5 million in cash compensation flowed to the top paid executive at each of the 82 hospitals.

Here’s how executive compensation breaks down at the 82 largest non-profit hospitals using the IRS 990 informational returns and auditing the latest year available:

Even after paying lavish salaries, these non-profit hospitals had enough left over to add nearly $40 billion to their bottom-line.

We found that the assets, investments, and bank accounts  at these charitable hospitals increased by $38.9 billion last year, from $164.1 billion to $203.2 billion. That’s 23.6 percent growth, year-over-year, in net assets. Even deducting for the $5.2 billion in charitable gifts received from donors, these hospitals still registered an extraordinary 20.5 percent return on investment (ROI).

Additionally, these 82 hospitals spent $26.4 million on lobbying to defend the status quo. Because government money and charitable donations can’t be spent directly on lobbying, these hospitals used the payments from patients to lobby government to preserve their market position.

It’s time to embrace the transparency revolution and open the books on the real prices paid by patients for healthcare services.

Patients have a right to ask whether doctors are working for them or for the lavishly compensated hospital CEO. What they need is a market that features transparency, competition and choice.