Thanks, ‘Avengers: Endgame,’ for Reminding Us Why Inflation Matters

Marvel recently re-released the final film in its “Avengers” series with extra footage and a post-credit tribute in hopes of breaking the worldwide record for top-grossing movie of all time.

So far, the gambit seems to have failed. As of July 2, “Avengers: Endgame” had collected US$2.77 billion in worldwide ticket sales. This is still $22 million shy of James Cameron’s 2009 film “Avatar.”

But in reality, “Endgame” isn’t even close to the real record-holder – nor is, for that matter, “Avatar.” The reason why gives me an excuse to offer a short lesson on inflation.

Why adjust for inflation

Prices from year to year cannot be directly compared with one another because the cost to buy things changes dramatically over time.

For example, in nominal terms, it costs more today to buy movie tickets, popcorn and soda and get to the theater than it did in the past, while it costs much less to call your friends and invite them to come along.

Without adjusting for inflation and changes in purchasing power, comparisons from one time period to another are meaningless.

One of my grandfather’s favorite stories helps illustrate this. He used to talk about the “good old days” in the 1940s when a cup of coffee or a loaf of bread cost just 10 cents. But my grandpa didn’t consider how much lower his wages were back then.

And that’s why “Avengers: Endgame” is a long way from becoming the box office king. The heralded numbers don’t reflect inflation.

To demonstrate, let’s first look just at U.S. domestic ticket sales since it’s easier to calculate and see the effect.

Calculating sales internationally is trickier because inflation is different in every country. IMDb, however, makes a valiant effort making these adjustments.

With $2.77 billion, “Endgame” falls to fifth, leaving it with almost $1 billion in ticket sales to go to before it could legitimately lay claim to the top title. 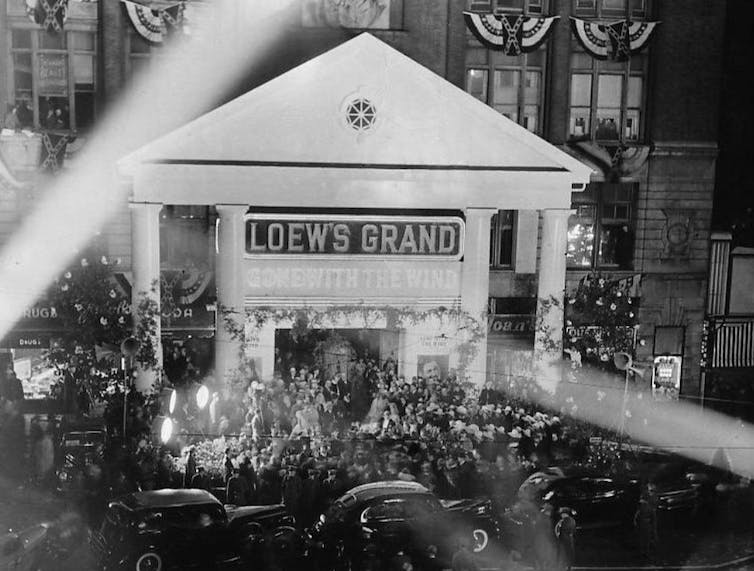 Gone with the Wind’ came out in 1939, when ticket prices were less than 25 cents. ACME News Photos, CC BY

We love Hollywood movies because they provide entertainment and escapism.

However, the marketing of Hollywood movies and the hype surrounding ticket sales records, like movies themselves, often play fast and loose with economic reality. This is something I expect we’ll see more of as films get released on far more screens and more people in countries like China go to see them.

I liked “Avengers: Endgame,” whose plot is based on time-traveling superheroes. It was definitely three hours of escapist fun. But the hype surrounding its box office records, like its plot, shouldn’t be taken too seriously.