Infernal Inflation: What Goethe’s Devil Can Teach Us About Economics 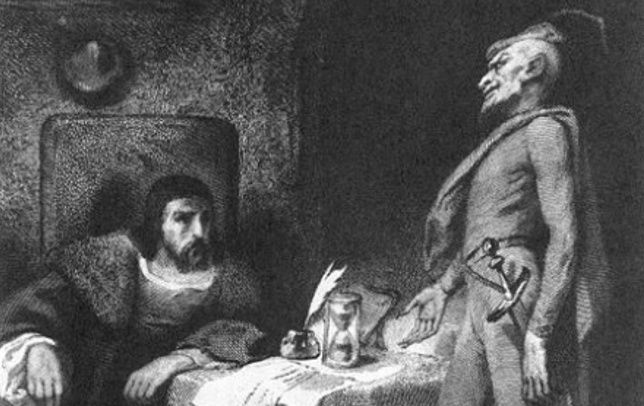 Disguised in the form of a fool, the devil visits a young emperor. The unfortunate ruler bemoans his nation’s ragged economy to the archdemon. However, the devil develops a solution: flood the country with paper money. The emperor praises the wise fool, and soon puts the plan into action.

This early scene of the fascinating sequel Faust II cements the gravity with which Johann Wolfgang von Goethe approached the subject of economics, an intensity likely brought about by his witnessing some of the more disastrous parts of the French Revolution. The subject of paper money, in particular, worried him.

Now, paper money isn’t dangerous in and of itself. The potential problems lie in just what that money represents. Each slip of paper is a mere stand-in for something of greater value. Think of it a bit like a coat-check. For example, the United States used to abide by a “gold standard” in which a roughly equivalent value in gold existed for the amount of money in the economic system.

Inflation occurs when the amount of paper money increases to the point that it devalues itself. This problem is one of the chief concerns of what is known as the Austrian School of Economics. This group is one of the few to discourage what is called “mild” inflation. This method, promoted by both modernists and Keynesians, adds paper money to a system in hopes of stimulating spending. However, an economic policy such as this, combined with massive unemployment, contributed to the infamous stagnation and inflation, or “stagflation,” of the 1970s.

Perhaps F. A. Hayek, an economist and one of the leading members of the Austrian School, put it best in his contribution to 1980s Unemployment and the Unions: Essays on the Impotent Price Structure of Britain and Monopoly in the Labour Market:

Since any inflation. . . can help employment only so long as it accelerates, adopted as a means of reducing employment, it will do so for any length of time only while it accelerates. ‘Mild’ steady inflation cannot help—it can only lead to outright inflation. That inflation at a constant rate soon ceases to have any stimulating effect. . . is the conclusive argument against the ‘mild’ inflation represented as beneficial even in standard economics textbooks.

Inflation should not be regarded as a tool. Rather, it is a symptom of some greater issue within the economic system.

Now, let us return to the Faustian example. How exactly did this fictional scenario play out? Well, the emperor, freed from the responsibility of backing his purchases with gold, soon became quite careless. He went on a veritable spending spree, leaving the entire country in economic ruin. As a result, civil unrest quickly gave way to a full-fledged war.

Certainly, Goethe felt strongly enough about economics to include the subject among the ethical and religious issues of one of his greatest moral-philosophical discourses. Would we be better off by paying the same amount of attention to this subject as well?