Two Thumbs up for the Trades 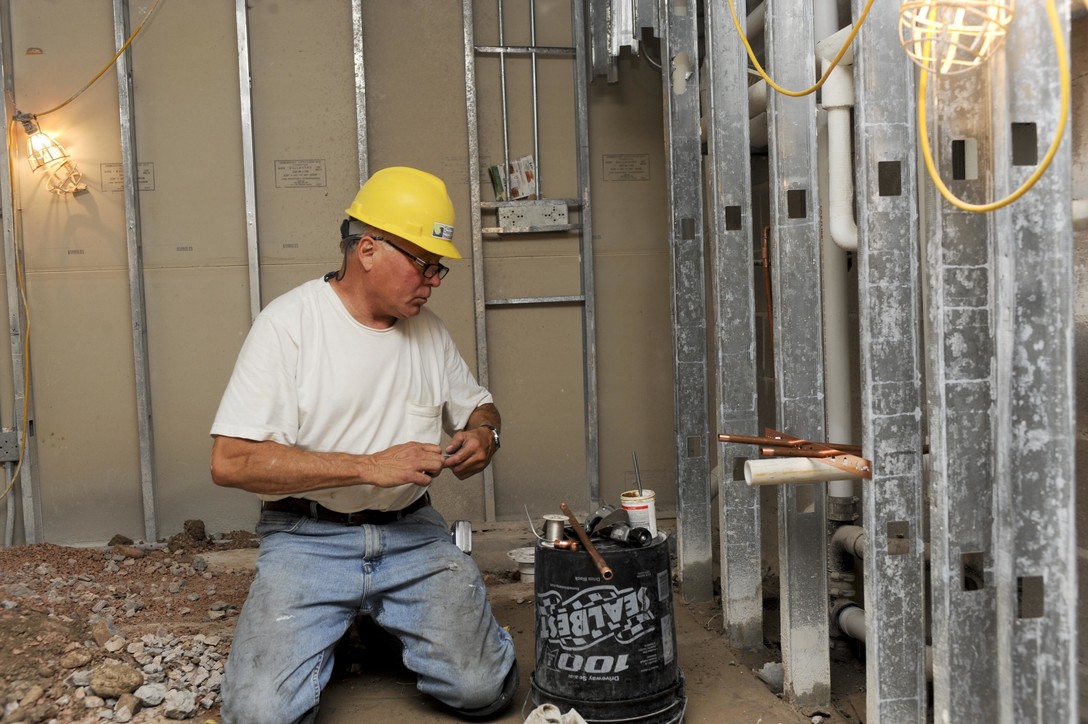 Last week I was strolling through a park beside the French Broad River when I met a former student, a young woman whose fiery personality and humor had always enlivened classroom discussions. With her was a handsome young man whom I assume she is dating. When I asked him what sort of work he did, he looked a little abashed and said, “I’m a plumber” with a defensive note in his voice.

I used to see the same reaction in some of my students who chose a trade over college. One kid, a burly fellow, always seemed embarrassed by choosing to become a welder, even though he found lucrative employment at the age of twenty.

Why is it that anyone employed in the trades must feel defensive about their choice of occupation?

It can’t be the salary. According to U.S. News & World Report, in 2017 the median salary of a plumber was $52,590. That same year, data from the Social Security Administration puts the average wage of an American worker at $48,252.

It can’t be the work those in the trades do. Which of us hasn’t given thanks to the heavens when the plumber fixes that busted pipe, when the roofer repairs the leaky shingles, when the builder takes an unfinished basement and magically transforms it into a playroom and two bedrooms with a bath? When we become acquainted with an honest, competent worker – a mechanic, a brick mason, a carpenter – if we have any sense at all, we treat that person to red carpets and applause.

But I have asked the wrong question. So let’s reframe it.

How is it that some of us have made those employed in the trades feel inferior to those in the professions? Why do some regard the young person who attends the local community college to study elevator repair or dental hygiene as inferior to a contemporary studying English literature in college? Why view a man in a coat and tie sitting behind a desk as more prestigious than the guy who comes home with dirt under his fingernails?

Our cars, the roads on which we drive, our houses and apartments, offices and restaurants, every chair, every shelf, every implement from our toothbrushes to our favorite coffee mugs: all of these things are the work of human hands. Some of these goods are the product of assembly lines, some the consequence of men and women of the trades who bring an array of skills to their tasks.

All of these people have an intelligence often hidden by the title of their occupation. A man in his early thirties I met only once worked in the paper mill in Canton, North Carolina. He spoke with the accent native to the hills where he lived and looked nondescript. During our conversation, however, he revealed he had bought a house at the age of seventeen – an uncle helped him with the financing – fixed it up, rented it out, and now owned upwards of twenty such houses. This same man was fascinated by the history of the American West, and used his summer vacations to visit such historic places as the Alamo and the Little Bighorn National Monument.

My son-in-law is a contractor, a skilled builder and maker of furniture. He is a bright man, quick on the uptake, who has read many of the great books and will soon be teaching Euclidian geometry in a private school. Many of his friends, both those who graduated from college and those who never attended, also work in the trades, and display an equal array of gifts aside from their jobs. Another woman in town, a homeschooling mom and a teacher in a local co-op, declined to college and instead became an auto mechanic.

Many young people, I suspect, labor under the expectations of others regarding their choice of a career. Bill’s parents encourage him to study medicine… but he loved his Scouting experiences and dreams of joining the U.S. Forest Service. Sally’s parents hope she’ll go into accounting and join the family business… but she imagines herself as a paramedic whirling around in an ambulance and saving lives.

In The Curmudgeon’s Guide to Getting Ahead: Dos and Don’ts of Right Behavior, Tough Thinking, Clear Writing, and Living a Good Life, a book that should be read by young people everywhere, Charles Murray offers excellent advice on choosing a vocation. “Instead of trying to choose among specific careers,” he advises, “think first about the things you especially enjoy.” He then offers a sample list of such possibilities, such items as “You enjoy being outdoors,” “You enjoy solving puzzles,” “You enjoy security and predictability,” and “You enjoy risks.” Murray concludes with this injunction: “Once you have identified what things you instinctively enjoy, then start thinking about a career.”

The key to the “pursuit of happiness” in our work does indeed lie in discovering what we enjoy and then looking for ways to match those pursuits to a vocation.