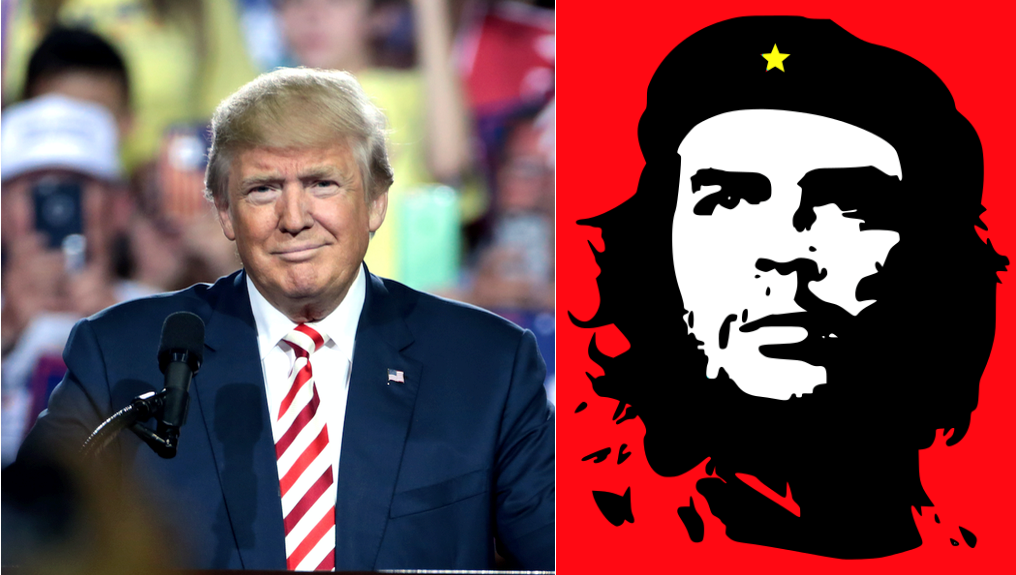 Ironically, Donald Trump, the capitalist, and Che Guevara, the communist, share the same birthday. President Trump turns 73 on June 14th, while Guevara would have been 92.

Most Americans are familiar with Trump’s life, but beyond the commonly seen t-shirt logo, less is known about Guevara.

Born in 1928 to a middle class Argentinian family, Che Guevara came to be known as a leading figure in the Communist Cuban Revolution. He served in Fidel Castro’s cabinet, oversaw the execution of hundreds of Cubans, and tried to foment revolution in South America. The Bolivian army killed him in 1967.

It is an odd coincidence that the capitalist leader of America celebrates his birthday on the same day as the poster child of Marxist-Leninism.

Let us examine three issues to see how they differ and whose legacy may be more long lasting.

Donald Trump and the mainstream media don’t get along. Trump has frequently criticized the press for only reporting “fake news.” He has repeatedly stated that the press is unfair to him. Other than retaliate with tweets, there is not much he can do because the First Amendment protects the press.

Che Guevara had no scruples about dealing with the press. The CIA reported that the Castro regime (of which Guevara was a trusted friend) set up “a propaganda empire.” In 1959 Guevara himself said, “We must eliminate all newspapers; we cannot make a revolution with a free press. Newspapers are instruments of the oligarchy.”

President Trump’s message to young Americans is unabashed patriotism: love America first. A prime example of this was seen in a message to the American Legion, where Trump told young Americans that “through this program, countless young people like you have been inspired to protect American interests and promote American values.” He ended the speech by telling the students to “love your country.”

Guevara’s message to young people, however, was Marxist. It was a call to unite the nations of Latin America under the model of the Cuban Revolution.

In a speech to the First Latin American Youth Congress on July 28, 1960, Che called on young Latin Americans to: “Defend the Cuban Revolution at any given moment. Permit me to say this is a duty of Latin America’s youth. What we have here in Cuba is something new, and it’s worth studying.”

3. The Message to the UN

In a message to the UN General Assembly on September 25, 2018, Trump stated:

America will always choose independence and cooperation over global governance, control, and domination. I honor the right of every nation in this room to pursue its own customs, beliefs, and traditions. The United States will not tell you how to live or work or worship.

“Choosing independence” as the primary goal is not just for the United States, but for every nation.

Guevara, however, communicated a different vision to the UN. In a message to the General Assembly delivered on December 11, 1964, he said:

It must be clearly established, however, that the government of the United States is not the champion of freedom, but rather the perpetrator of exploitation and oppression against the peoples of the world and against a large part of its own population.

He also said, “We want to build socialism. We have declared that we are supporters of those who strive for peace.”

According to the logic of his message to the UN, President Trump would allow the Cuban people to choose communism. Would Guevara be willing to let the American people decide their future as well?

It is too soon to evaluate Donald Trump’s legacy, but by Trump’s 91st birthday, there may be a clearer picture of how his economic and geopolitical policies impact the nation.

Che Guevara’s legacy is more clear, though. He was confident that professional revolutionaries could implement the Marxist-Leninist model. They had their chance in countless countries, and we know well the end result.