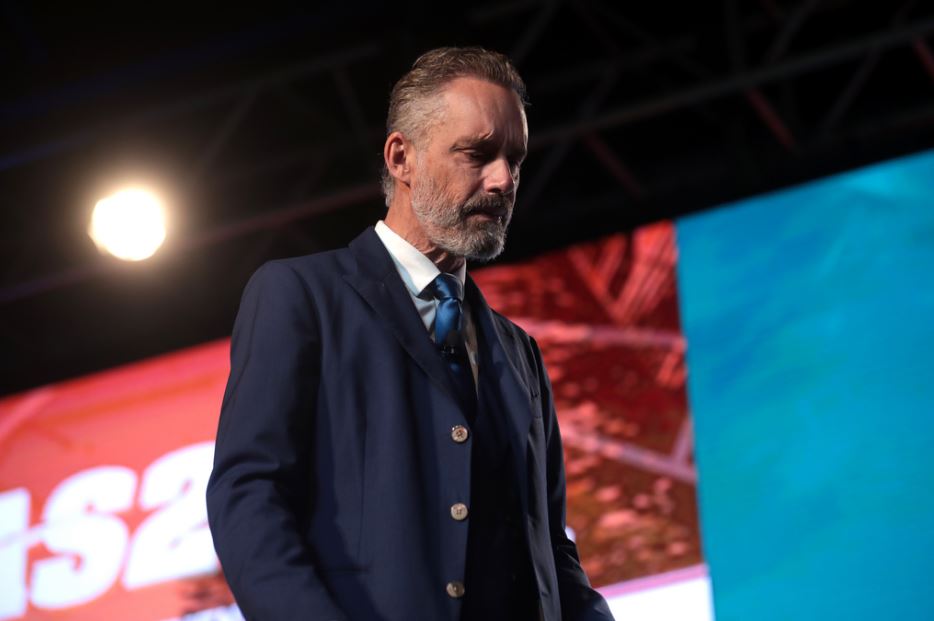 Last week, Jordan Peterson spoke at the Liberty University convocation (full video here). It was an unusual venue for a secular man, a clinical psychologist who is decidedly not an Evangelical in his style or his belief. Esther O’Reilly at Patheos talks about something that happened during the Q&A portion of his talk.  If you want to see it, go to the main video, and fast-forward to the 21:00 mark. That’s when it happens:

A young man rushes up and grabs a microphone, on the verge of tears: “My name is David [full name redacted], and I need help! I need help! I just wanted to meet you. I’m unwell…I want to be well…”

Peterson says, “I hope you can get the help that you need.” Spiritual director David Nasser walks over to calm the student as security guards appear. The student says more that’s not quite discernible, but you can make out “I’ve called 911” and “I want to know him better…”

Then he falls on his knees and begins sobbing. Tearing, wailing sobs.

Peterson begins to walk over himself as the video feed cuts out, but audio is still rolling. You can put together that the guards must have begun to remove the student, because Nasser’s voice can be heard saying firmly, “Stop. Stop. Stop pulling him.”

While the student is still wailing, Nasser says a short, simple prayer. He prays that God would heal the student, that the Spirit would work in him, and that he would be encouraged in this moment to know that everyone is on his side. After he finishes, the wails have subsided. The last thing he says to the student is, “Hey buddy. We’re for you.” Then the conversation resumes, as well as it can be resumed after a disturbance like that. Peterson is badly shaken and breaking up, trying to collect himself. Falwell opens his mouth and says something or other. Nasser is reassuring and earnest, patting Peterson’s shoulder and forthrightly attempting to salvage what can be salvaged of the convocation. Things stumble forward towards an eventual conclusion. But the disturbance hangs over it all.

If you listen to the episode, and the agonized wailing of this young man, you can see how and why it colored everything. That poor soul is in so much pain. No wonder it knocked Peterson off his game for a bit.

In her Patheos blog entry, O’Reilly meditates on the culture clash between Peterson and the Liberty folks, and how they worked together surprisingly well, despite it. In this passage, O’Reilly refers to the convocation’s opening ceremony, which involved a full worship band, and students singing along with their hands in the air:

For his part, Peterson seems genuinely touched. Partway through, he pauses to say something about the opening ceremony. I had hoped, cringing inwardly, that perhaps he was backstage and had missed it, but I realized that in fact he had been sitting through it the whole time. Yet what he said humbled me. He said that he loved it. He said that one of his greatest fears was the spread of undue (and unearned) cynicism among our young people. But the warmth and the sincerity exuded by the young people during the opening encouraged him. There was something “beautiful” about it.

You have to watch this short clip at the very end of the event. Pastor David Nasser asks Peterson how he (Nasser) can pray for him in the week upcoming. Peterson fights back tears, and gives an answer of startling humility:

I was really moved by the way Peterson handled himself here — moved, but not surprised. I’ve spent the past week or so listening to Peterson lectures about the psychological meaning of the Bible. Obviously I know who Peterson is, but I had never heard more than the odd interview with him before this past week. Devoting hours to hearing him talk really did reveal to me why he has such a following, especially among lost young men. Whatever flaws Peterson has, he leaves no doubt that he really cares about the people he’s trying to reach. A lot of what he says is just common sense, but he has a way of making it sound like he’s speaking right into one’s life.

He spoke into my life, I’ll tell you that. I have been struggling for a long time, trying to untie a certain knot that has long resisted my efforts in prayer and contemplation to undo. I didn’t turn to Jordan Peterson for advice — in fact, I can’t remember why I started listening to these Peterson lectures at all — but in truth, Peterson’s insights have given me a new way to think about the complicated problem, and the first hope I’ve had in a long time that there might be a solution. It’s a little too personal to discuss here, but the point I want to make is that I’m not a lost young dude, but rather a middle-aged man (only five years younger than Peterson) who has been unable to think or pray his way around a particular challenge that has weighed heavily on my mind. Peterson didn’t solve it for me, but he did restore hope that I am not helpless to solve it.

Peterson is not a  theologian or even a churchgoer (which is why Christians shouldn’t take his insights as Gospel truth), but I’ll tell you, church for me this morning was more meaningful than it has been in a long, long time, because of the words I heard Jordan Peterson — an unbeliever! — say about the Bible this past week. Peterson made me think about my own religion and its holy book in a fresh and life-giving way. It has been ages since I heard someone speak hope to me in this way, and believe me, I needed to hear it. This, I think, is why it kind of got to me to see Peterson near tears there at the end of the Liberty convocation, and to hear the prayer request he made (watch it above, if you haven’t yet).

This moment is a metaphor.

Many have asked why Jordan Peterson has had this moment over the last year. Few of his ideas are novel in Western philosophy, yet for some reason he had an impact no other popular or academic intellectual has had.

He filled a gap. The gap should not have existed. It was a lack of father figures, a lack of purpose and meaning. In the world of youtube videos he insufficiently fills that gap, but that’s asking too much of one man.

A mentally broken man, leaning down in a last desperate hope that an online intellectual could replace for him the meaning that used to be given by a thousand years of inherited culture. Overlaid by an evangelical giving a well intentioned but generic prayer.

Something is going to snap soon.

I have to say this; watching this video is a really good example of why people are “following” Peterson instead of turning to their own pastors, teachers, priests, whoever else. Compare Nasser and Peterson’s responses, depth of knowledge and identification with the young man David who was sobbing. In short, Peterson got it, Nasser didn’t.

Don’t get me wrong, Nasser did well in preventing the poor kid from being jerked off the stage; however, Peterson is not offering pat phrases or anything surface level, he’s interested and responding to the human condition at the deepest level, which is why he (Peterson) was so impacted by what just happened. The sob of the young man shows he is begging for meaning, something so deep that he can rebuild his psyche on it… Peterson is actually offering more of that depth than the evangelical Christian, and I say that as a Protestant Christian who doesn’t think Peterson has the full answer because he doesn’t believe in the objective reality of Jesus’ resurrection (at least not yet).

We need a Peterson who is fully Christian, or for Peterson to become fully Christian and then watch out world, there would be another revival IMO. I was one who recommended Peterson, specifically his Bible lectures, to the reader whose message you (Rod) posted awhile back; he was looking for the same meaning in life. My husband and I work in the mental health field (he’s a Clinical Psychologist, and I’m a Master’s level Christian Counselor), we use Peterson with people, esp. young men, who are not Christians because Peterson at least gives a reason for hope, and moral living in a way that atheists and agnostics can respect.

The world hasn’t seen a charismatic Jungian Evolutionary Clinical Psychologist who speaks on a vast stage before now, it’s really fascinating to see it unfold. I believe Peterson will check on the young man from the video. I hope so. And, yes, I pray for him and hope he finds Truth and Peace.