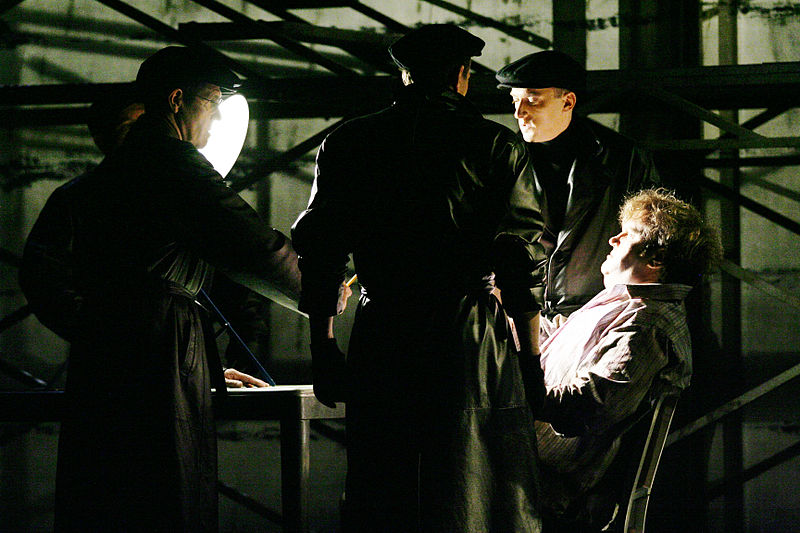 I recently re-read George Orwell’s anti-Soviet fable Animal Farm for the first time since high school, and I found myself at a loss to explain one of the book’s darkest scenes to the student I was tutoring.

In this scene, Napoleon (Orwell’s stand-in for Stalin) consolidates his power over Animal Farm (i.e. the Soviet Union) by accusing a group of pigs of conspiring with the exiled Snowball (i.e. Trotsky) to undermine the revolution. The pigs, having been coerced by Napoleon’s dogs (i.e. the secret police), confess to being agents of Snowball.

When they had finished their confession, the dogs promptly tore their throats out, and in a terrible voice Napoleon demanded whether any other animal had anything to confess. The three hens who had been the ringleaders in the attempted rebellion over the eggs now came forward and stated that Snowball had appeared to them in a dream and incited them to disobey Napoleon’s orders. They, too, were slaughtered. Then a goose came forward and confessed to having secreted six ears of corn during the last year’s harvest and eaten them in the night. Then a sheep confessed to having urinated in the drinking pool-urged to do this, so she said, by Snowball-and two other sheep confessed to having murdered an old ram, an especially devoted follower of Napoleon, by chasing him round and round a bonfire when he was suffering from a cough. They were all slain on the spot. And so the tale of confessions and executions went on, until there was a pile of corpses lying before Napoleon’s feet and the air was heavy with the smell of blood.

Why, my student wanted to know, would these animals confess if they knew they were going to be executed?

His next question was even more insightful: Did the animals even commit the crimes to which they confessed? Some crimes, such as the goose stealing corn, seem plausible, and the hens really did rebel, but the murder of the old ram sounds completely absurd. The tendency to echo Napoleon’s propaganda by blaming the phantom scapegoat Snowball further suggests that many of these confessions are fiction.

I found the first part of my answer in A Tale of Two Cities, by Charles Dickens. As Dickens describes the mass guillotinings of the French Revolution, he alerts his readers to “a species of fervour or intoxication,” causing unnecessary executions due to “a wild infection of the wildly shaken public mind.”

Like Orwell, Dickens portrays innocent men and women clamoring for execution at the hands of a bloodthirsty revolutionary regime. But why?

According to Dickens, the French Revolution degenerated into a death cult, with the guillotine replacing the Cross as the instrument of mankind’s salvation. Christians hope to reach a heavenly paradise by placing their faith in Christ and expressing that faith through good works.

Revolutionaries, on the other hand, seek to create an earthly paradise by killing everyone who stands in their way. Execution thus becomes the sacrament by which the community is purified. Those who truly believe in the future utopia promised by Marx or by the leaders of the French Revolution will naturally be drawn to partake of it.

Marxism is more rigorous and unforgiving than any religion in its call for total commitment to the cause, a standard of which all people (and animals) must necessarily fall short. If I, a sinful man (or hen or goose or sheep) who had tried and failed to live up to the revolutionary ideal, believed that I could best hasten the arrival of heaven on earth by allowing myself to become a victim of sacred state violence, the temptation would certainly be strong. Whether the goose stole the corn or not, it is easy to imagine why he felt he had no choice but to embrace his own execution. Having been deceived into feeling a revolutionary reverence for death and driven to despair by the demand for total ideological orthodoxy and orthopraxy, what else could he do?

The second part of my answer came from an article entitled “Why Do People Admit to Crimes They Didn’t Commit?” According to this article, almost 30 percent of people exonerated by DNA evidence originally confessed to crimes of which they were innocent. The author lays most of the blame for these false confessions on police, who are legally permitted to lie to suspects in order to extract confessions. Here’s one example:

[I]n 1988 Martin Tankleff was convicted of murdering his parents on Long Island. Detectives told Tankleff — who was 17 at the time — that they had found a lock of his hair in his dead mother’s hand. They also falsely reported that his father said Tankleff had committed the crime before losing consciousness and later dying. Both assertions were lies. Tankleff initially believed he must have done it, saying, ‘My father never lies.’

As soon as I read the line, “My father never lies,” I understood what Orwell was getting at. Tankleff’s words, implying more trust in authorities than the truth, sound eerily similar to one of the slogans of Animal Farm: “Napoleon is always right.” He never lets a good crisis go to waste. If Napoleon can convince the other animals that their revolution is constantly threatened from within and without, then there is no limit to the power he can seize to protect them from these largely imaginary threats.

Napoleon has trained the other animals to trust his propaganda more than their own memories. If he says there was sabotage, then there was, and if no one admits to it, then that’s as much as to say that Napoleon was wrong, which is a metaphysical impossibility. Someone must confess. It’s easy to imagine a long silence in which any number of animals think to themselves, I don’t remember doing anything wrong… but it must have been me!

As Aleksandr Solzhenitsyn wrote, totalitarian regimes force ordinary people “to participate in lies,” and Orwell shows just where that leads: the corruption of the human soul and eventual death.

Fortunately, Solzhenitsyn also offers a way to resist totalitarianism, urging his readers to acknowledge that goodness does not exist in a pure form in any human being or social class and to live by a simple creed: “Let that [lie] come into the world, let it even reign supreme—only not through me.”