Homer on Why Hospitality is the Greatest Virtue 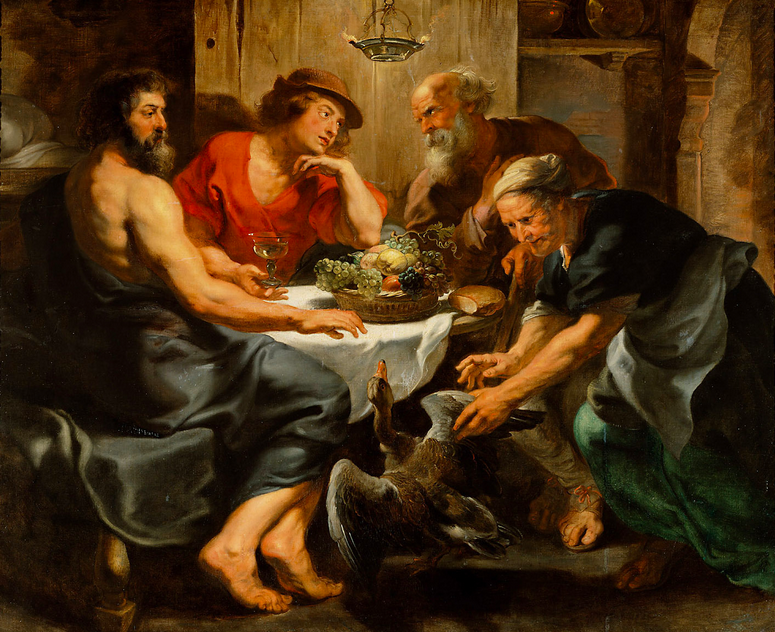 Perhaps you would like to know what virtue I consider the greatest of all. For me that question is not a difficult one. Though I celebrate courage in my Iliad and perseverance in my Odyssey, there is a third, greater virtue, apart from which civilization can neither thrive nor survive.

I speak of xenia, a word that your age would translate as hospitality, but which means far more. The virtue of xenia, and the rules that define it, have to do with the relationship between a stronger and a weaker person. That weaker person comes in many forms: as a stranger, as a suppliant, as a guest, or, sometimes, as a host.

The key factor is that the weaker person is put in a position where he must rely on the mercy, justice, and fair play of the stronger. For xenia to be fulfilled, the stronger person must yield to the pleas of the weaker, not make use of him to his own benefit.

The Trojan War began, not from a lack of courage or perseverance, but from a violation of xenia. When the Trojan Paris visited the Greek Menelaus in Sparta, the latter extended xenia to the former. He took him in and fed him and treated him with honor and respect. But Paris did not reciprocate. Abusing Menelaus’s trust, Paris stole away Helen, the wife of his host, and carried her off to Troy.

In one fell swoop, the covenants between husband and wife and guest and host were shattered, and all Europe and Asia trembled at the breach. For xenia, once broken, sets off a chain reaction that corrupts the very vows that raise us above the beasts.

My Iliad, like the Trojan War itself, begins with a rupture in the delicate weave that is xenia. Though Achilles is the strongest soldier on the Greek side, Agamemnon, as Commander-in-Chief, holds power and authority over Achilles. When my epic opens, Agamemnon abuses his authority and seizes Achilles’s war prize for himself. By doing so, he breaks the laws of xenia and sets Achilles, himself, and the Greek army on the path of ruin. No longer able to trust his commander to heed xenia, Achilles pulls out of the war with tragic results.

Later in the epic, when Achilles, enraged at Hector for killing his friend, reenters the war, he does so with a ferocity that threatens, not only to upset, but to destroy xenia. As he slaughters his way through the Trojan ranks in search of Hector, Achilles pins an unlucky Trojan soldier named Lycaon to the ground with his spear. Immediately, Lycaon cries out to Achilles in supplication: “Spare me, and my father will give you great treasure to compensate you for my life.”

According to the laws of xenia, Achilles must spare Lycaon and allow his father to ransom him with the promised treasure. But Achilles no longer cares for xenia. Ignoring the cries of the defeated soldier, he stabs him to death and exults in the kill.

To make matters worse, after he kills Hector, Achilles, rather than ransom back the corpse as xenia demands, drags it around the walls of Troy for his family to see. Then, refusing to allow anyone to come near the body, he defiles it for twelve days.

As civilization itself hangs in the balance, the gods finally intervene, sending Hector’s father, Priam, into the Greek camp to ransom the body of his son. Had Achilles killed the suppliant Priam in a fit of rage, he would have torn down the very foundations of human community; instead, moved by Priam’s tears, he relents and releases the body.

Do not think, you who live in the twenty-first century, that civilization is a given that cannot be taken away. Apart from xenia, the subtle vows and ties that link together humanity cannot exist for long. Tear away at those links, and the weaker among you will soon be devoured by the stronger. Without xenia, there can only be jungle law.

So Achilles says to Hector in the moment before he attacks. Hector, aware that he will soon die, begs Achilles to make a pact with him that whichever of them defeats the other will swear not to violate the body of the defeated. But Achilles will have nothing to do with such sentimental oaths: “There are no pacts among lion and wolves.”

Consider well, my fellow mortals, what a world without xenia means before you set about to violate it.

Such is the role that xenia plays in my Iliad. In my Odyssey, it plays an even more prominent role. Though your world may be more organized than mine, dear friends of the future, your ability to travel in safety and make covenants with people from foreign lands rests squarely on the laws of xenia.

Odysseus could never have made it home had he not met islanders on his journey who honored xenia. Indeed, those he met who refused to honor it caused him sorrow along the way and sorrow at his return. The Cyclops Polyphemus, the very definition of a bad host, chose to feed on Odysseus’s men rather than feeding them.

And then there was Calypso, who violated xenia in a different way. She showed Odysseus great and lasting hospitality, but refused to let him leave when he requested it. Of course, if truth be told, Odysseus himself had previously violated xenia in the cave of Polyphemus. Playing the role of a bad guest, Odysseus had entered the Cyclops’ cave uninvited and eaten his food without being asked. Such behavior naturally incurred the wrath of Polyphemus, leading to a showdown.

In the end, the wily Odysseus put out Polyphemus’s single eye, but he could not prevent the monster from laying a curse upon his head. Odysseus soon found that his breach of xenia brought with it terrible consequences in kind. As he lay for seven years trapped on the island of Calypso, his wife and son became the victims of a mob of evil guests who ate them out of house and home and even dared to court Odysseus’s wife.

My friends, be forewarned by the trials of Odysseus. When we violate xenia, we do not act in a vacuum. To the contrary, our actions result in a subtle shift in the balance of power that leaves us, and those around us, vulnerable to the laws of the lion and wolf.

Heed the supplications of the weaker person, lest a day should come when you yourself plead for mercy and find only cruelty in the eyes of the stronger.