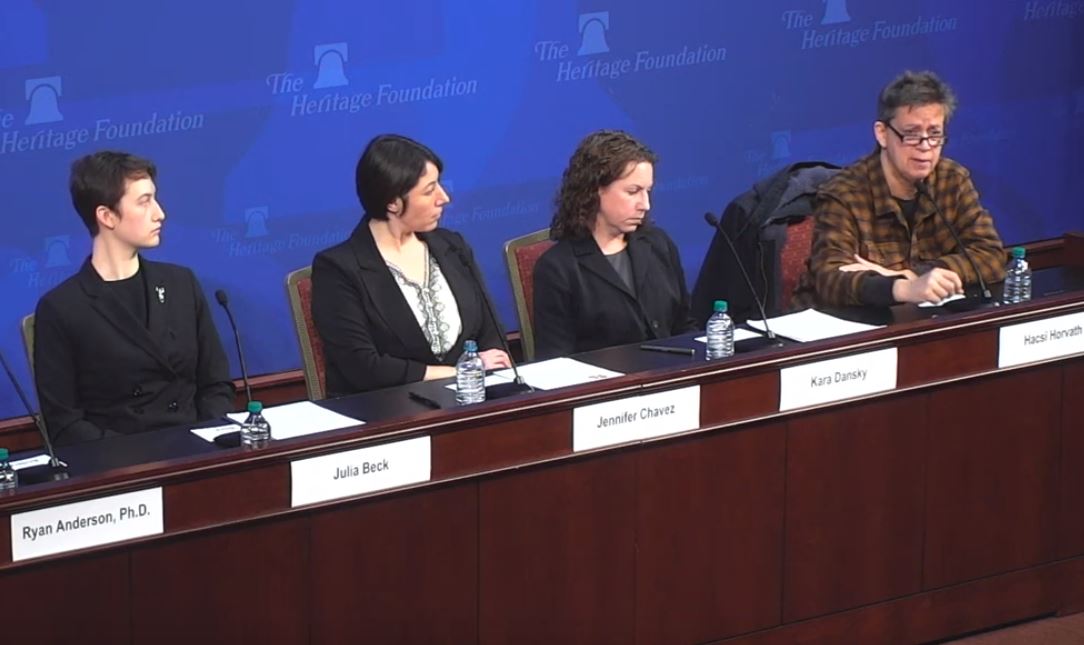 “The Equality Act, which sounds all well and good, is an unmitigated disaster for women and girls,” Kara Dansky, a lawyer and board member at the Women’s Liberation Front, said at an event at The Heritage Foundation featuring her and three other feminists.

“And the thing is, it is not possible to both enshrine gender identity in civil rights law and protect women and girls as a distinct legal category at the same time,” Dansky said. “It’s just not possible.”

The Equality Act would add sexual orientation and gender identity to characteristics protected by the 1964 Civil Rights Act.

This would make hospitals and doctors vulnerable to litigation “if they don’t follow the medical recommendations of the transgender movement,” as Emilie Kao, director of Heritage’s DeVos Center for Religion & Civil Society, put it in a recent op-ed.

The panel discussion featuring Dansky, called “The Inequality of the Equality Act: Concerns from the Left,” was moderated by Ryan T. Anderson, Heritage’s senior research fellow in American principles and public policy.

In introductory remarks, Anderson characterized gender identity as “an individual’s inner sense of being a man or a woman, or both, or neither. It exists along a spectrum and can be fluid.”

Rep. David N. Cicilline, D-R.I., sponsored the bill, which is being pushed by Pelosi and has been referred to a subcommittee.

Although liberals are working to advance the legislation, Dansky said, it would undermine everything they claim to work for in pursuing equality.

Democrats “have largely embraced” the Equality Act because they are “well intentioned,” she said, adding:

But I really don’t think that Democrats in Congress have fully explored the potential consequences of what this law would mean if enacted. And I hope that they will. OK, so finally this is not about the law. This is more about really the intellectual bankruptcy of gender identity ideology, and the importance of language.

Another panelist, Jennifer Chavez, a lawyer who also is a board member of the Women’s Liberation Front, shared several stories of parents whose children have said they wanted to change their sex. Among them was Jazz Jennings, an 18-year-old male who underwent “gender confirmation surgery” last year to become female.

Jennings hosted a “farewell to penis party” to celebrate her transition.

Chavez also read the account of an anonymous mother who was heartbroken over her daughter’s sex change.

My daughter’s now 20, has been on testosterone for a year, and has made an appointment for a consult about a double mastectomy. All this even though she can’t legally buy and hold your drink.

I can’t get any answers from doctors in response to my questions and concerns about the risks of these treatments. I get no answers from mental health professionals about what makes these treatments appropriate, or what makes my daughter different from those young women who are no longer trans and have transitions sometimes after being on hormones for years.

Having watched these adults enable my daughter to do this with no medical science to back it up is a scenario that I never dreamed any parent would have to face, at least not in the U.S. This is our reality now, a reality that the mainstream media won’t touch.

Julia Beck, a writer who is a producer at Women’s Liberation Radio News, said she was removed from Baltimore’s LGBTQ Commission for “using male pronouns to talk about a convicted male rapist who identifies as transgender and prefers female nouns.”

Beck, who was on that commission’s Law and Policy Committee, said those who push to recognize “gender identity” are sorely misled.

“Many well-intentioned people think that this concept of gender identity is the next frontier of social justice, but in reality it is regressive,” Beck said. “Gender is based on rigid sex roles that legitimize male dominance and female subordination. The idea of a female or male brain only justifies treating women as subhuman.”

She said she is a lesbian and is misrepresented by those who are born male but want to identify as female, and that girls and women are being told they were born into the wrong gender if they don’t follow standard female practices, like wearing makeup or heels.

“Liberals are trying to change your body to match your personality as a lesbian using a radical feminist analysis,” Beck said, adding:

I want to do away with the book. I want all people to love themselves and live however they want in the bodies that they were born [in], as girls who play with trucks and like the color blue, boys who play with dolls and like the color pink, children with autism, children [who] would likely grow up to be happy gay adults are now being sterilized for defying sex stereotypes.

Although sometimes “being a woman is not always fun,” Beck said, she is devastated by fellow women who are relinquishing their health and wellbeing to undergo dangerous medical procedures to try to become males.

“We are losing an entire generation of sisters to this madness,” Beck said. “That’s why it’s personal. It’s infuriating. It’s devastating.”

Hacsi Horvath, an adjunct lecturer in the department of epidemiology and biostatistics at the University of California, San Francisco, once identified as transgender. Horvath, who was born a male and says he pretended to be a woman for years, said people are afraid to speak against the “gender equality” movement due to fear of backlash.

Dansky, of the Women’s Liberation Front, encouraged women to not so easily relinquish the rights that women from generations past fought for.

“Feminists have fought really hard for our rights to vote, to serve on juries, to have sex-segregated spaces, and we’re not giving them up easily,” Dansky said.