Should You Give Up Your Metro Seat to a Pregnant Woman? 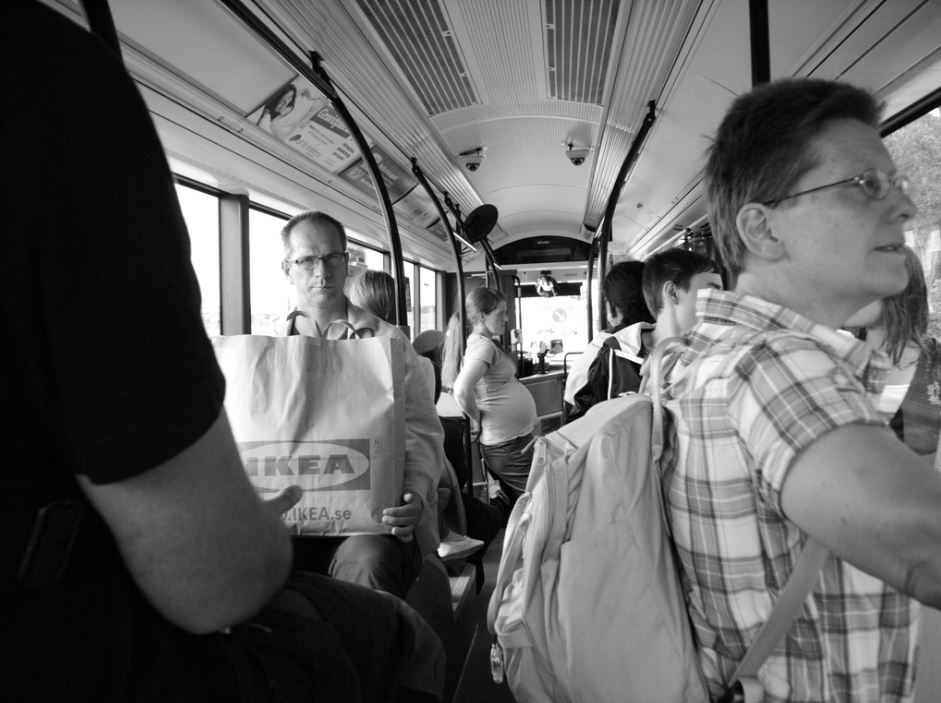 Should you give up your seat on public transport to a pregnant woman? Probably a majority of people would answer “yes” to that question. But how does that work in practice?

The London Underground has a creative solution. They offer expectant mothers a white button to wear that says “Baby on Board.” Their trains have priority seats for pregnant women as well as the elderly and disabled. The buttons are supposed to save a woman the embarrassment of asking for the priority seat and put the onus on other passengers to offer to get up. They were launched in 2006 and gained fame after Kate Middleton was photographed wearing one when she was expecting Prince George. The New York Subway began offering similar buttons in 2017.

I know all about Baby on Board buttons. I traveled to London when I was expecting. My pregnancy wasn’t visible yet but I felt terrible. Standing for long periods was torture. So I requested a button as soon as I arrived. I thought it would be the perfect solution.

My experiences over the course of my time in London were decidedly mixed. I was offered a seat on less than a quarter of my rides. To be fair, I was often riding during rush hour. The buttons are roughly the size of a quarter. When we’re all packed in to a train car like sardines, I wouldn’t expect my fellow passengers to notice I was wearing one. But aren’t those also the times when a pregnant woman needs a seat the most?

Interestingly, 100 percent of the people who offered me a seat were men and ethnic minorities. My best experience came when I was riding with my mother. A man standing nearby told his two young children to give their seats to both of us. I felt bad for the kids and told him there was no need since we were getting off at the next stop.  He said, “It doesn’t matter. They need to learn these things.”

However, my final journey wearing the button was a dreadful experience. I stood for over half an hour feeling desperately nauseous while all the seats in the long row next to me were occupied by men in their twenties and thirties who looked healthy and able-bodied. At one point, a seat actually opened and I moved towards it. But a spritely young man leapt into it ahead of me and then laughed in my face.

At that point, I removed my button.  The aggravation I felt at the way I’d been treated wasn’t worth the slight chance that someone might get up for me. If I wasn’t wearing it, at least I didn’t have false hope.

These days, I live in Sao Paulo, Brazil. Whenever I ride the metro with my two small children, someone offers me their seat the minute I enter a train. It goes like clockwork. I have not been pregnant here but I suspect I would get much better treatment than I did in London.

Why is that? I don’t like to make sweeping generalizations about how some cultures respect the family and motherhood more than others. But it’s hard for me to conclude otherwise.

However, the picture is more complex than that. Before I became a mother, I lived near Washington, DC, and rode public transport regularly. I never noticed any pregnant women standing on my train or bus. But they must have been there sometimes. I would like to think I would have offered my seat. But I simply never paid much attention to other passengers. I was always occupied with a book or my phone.

What do you think? Does western society disrespect motherhood? Or are we all just too self-absorbed to notice when there’s a pregnant woman standing on our train?