The Yellow Jackets Versus The European Empire 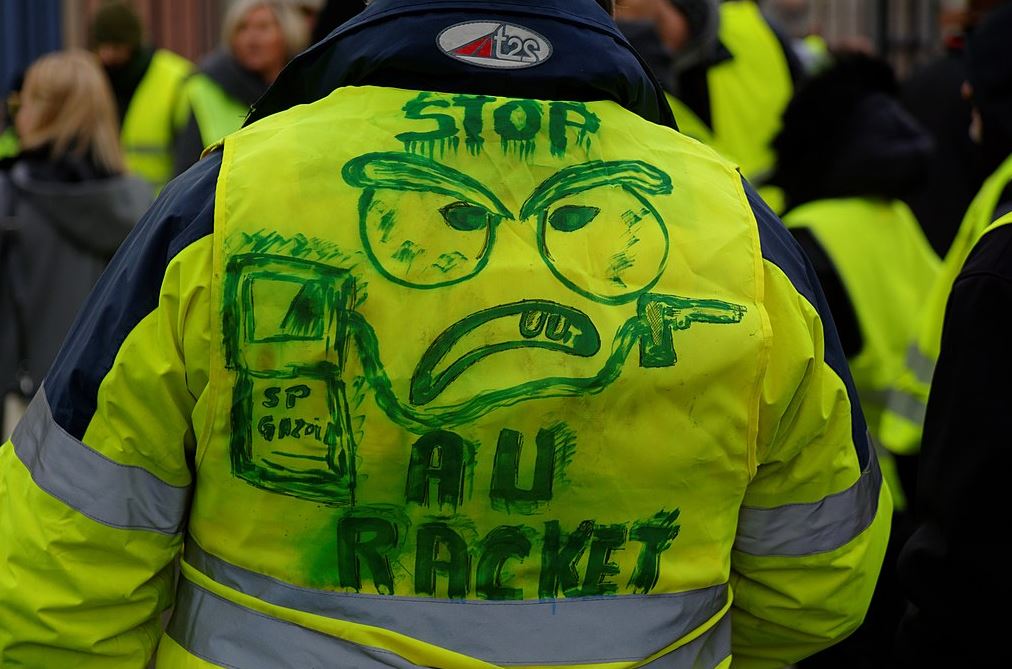 So the “yellow jacket” protests are continuing in France, even though President Emmanuel Macron postponed the new fuel tax that ostensibly set them off.

This tells us that the protests have motivations beyond just the fuel tax. Indeed, the populist protesters have now been admixed with antifa types and sundry lumpen proletarians, smashing windows, looting stores, spray-painting communist graffiti, and wreaking further havoc on France’s carbon dioxide emissions targets.

One obvious point to make is that the French have a habit of rioting and revolting every few decades—this is, after all, the fifth Republic. France’s first republic was established in 1792, and it’s been revised four times since. By contrast, during a slightly longer timespan, the U.S. has gotten by with just one.

Today, the search is on for a larger explanation of the mayhem. Needless to say, some are blaming Putin. Yet until such time as Russian agent provocateurs are found in the streets of Paris, it’s hard to conclude that Muscovite incitement is anything more than schadenfreude via the Internet.

This description of the yellow jackets’ preferred medium might well be accurate, but it’s also true that activists, even revolutionaries, found ways of communicating before electricity, to say nothing of social media.

Thus we must conclude that the key driver of the protests isn’t an app but rather larger anger at the status quo. As Bloomberg News noted briefly on December 7, an additional flashpoint has been “declining services in rural and small-town France.” Le Figaro put the matter in much starker terms on November 16: “For a long time, peripheral France and its inhabitants have been immolated on the altar of globalization.”

So now we’re starting to see why the yellow jacket movement might have real legs. Indeed, back in April, commentator Diana Johnstone wrote with empathy about the plight of French railway workers, then confronted with the disassembly of France’s public rail system—and of their way of life, as well as of life in the French countryside as a whole:

Run as a public service, the national railroad used its benefits from lines with heavy traffic to finance those in more sparsely inhabited rural areas, this providing equal benefits to people wherever they live. That is on the way out. The destruction of public services hastens the desertification of the countryside and the growth of mega-cities. Hospitals in rural areas are being shut down, post offices closed. France’s charming villages will die out with the last elderly inhabitants still clinging to them.

Johnstone added that strong public infrastructure has been a central part of French life since the days of Colbert. Yet now, operating under the dictates of the European Union—as well as his own neoliberal ideology—Macron is pulling it all apart.

However, in the great tradition of reelection-hungry politicians, Macron, now beaten down to a 23 percent approval rating, shows us that he is always, well, flexible. On Monday, he went on nationwide TV and announced that he was raising the minimum wage and implementing other changes. “We want a France where one can live in dignity through one’s work and on this we have gone too slowly,” he said. “Maybe I gave the impression that I didn’t care,” he added, assuring citizens that he “believes in this country that I love.”

Yet even so, the yellow jackets—admittedly an amorphous group—seem to have rejected Macron’s bid for reconciliation. That’s not the last word, of course, on Macron’s fate; after all, he has a set term in office until 2022. Still, the next four years of his presidency are looking to be a long and difficult slog.

In addition, the December 11 terrorist attacks in Strasbourg, which left three dead and a dozen wounded, seem to have been perpetrated by a North African Islamist cell, thus undermining yet another element of Macron’s globalist agenda, namely an accommodating attitude toward immigration.

In the meantime, as yellow jacket-ish protests spread to Brussels and Amsterdam, we might view these disturbances as all being connected to the peaceful populist wave that has washed over Europe in recent years, from Britain to Italy to Austria to Hungary to Sweden.

So yes, perhaps we should consider the tumult in France as just a window into the nature—and fate—of the European Union. And that’s fitting for Macron, in an ironic way, because he has avidly promoted himself as the champion of a United States of Europe.

In fact, from the beginning, the EU set itself up as an efficient collective enterprise—the very thing that Macron, a onetime investment banker, would love. It was to be, in other words, a consciously rationalistic and capitalistic entity in the manner of Locke and Rousseau. Thus the 28 member-states agreed to put aside their national and ethnic differences in favor of the new technocratic empire.

There was just one problem: nobody asked the people of Europe. Oh sure, at one time or another, officials in countries won an electoral mandate for bits and pieces of the “EU project.” Yet as everyone knows, the Eurocrats—clustered in Brussels, never elected to anything—went far beyond any mandate, taking the EU to dizzying heights of non-accountability. That’s why the words “democracy deficit” are so commonplace. And that’s why the 28 members of the EU might soon be 27, if the UK follows through on Brexit—though admittedly, that’s a muddled situation. (Note to the EU: would you really be happier with a disgruntled England still in? Careful what you wish for!)

Most governments in Europe—including the right-wing regimes in the east—are happy enough to remain in the EU, if only because guilt-ridden Germans are happy to pay them to stay. That opens up the prospect of a social cleavage within each member country. On the one hand, in their marble palaces, the heads of state are precisely calculating their fiscal flows, while on the other hand, down in the streets, the populists, left out of the calculations, are angrily throwing rocks. (Here at TAC, this author has written about this odd bifurcation in the case of Poland.)

It’s hard to see how this situation can remain stable. Indeed, in thinking about the EU, one hearkens back to a past attempt to ignore pulsating popular passions, namely the Congress of Vienna in 1814. During that famous post-Napoleonic conclave, the crowned heads of Europe convened in an effort to reimpose royal order. That is, they jointly resolved to pretend that the republican nationalism of the previous quarter-century was just a passing fad. As a result, regimes were planted on top of peoples without regard to national sentiment—a 19th-century anticipation of the EU’s 21st-century democracy deficit.

Not surprisingly, Vienna’s hoped-for “Concert of Europe” failed to last for long. Within two decades, the Belgians, Poles, and Spanish rose up. The Belgians gained their independence, while the others were crushed—and as a result they seethed. (Also during that period, the Greeks successfully rebelled against the Ottoman Turks.)

Then came the continent-wide revolts of 1848, which proved that the ancient regimes were, in fact, obsolescent. The governments that survived had to retool themselves, oftentimes deliberately stoking ethnic passions, both internal and external, as part of their survival strategy.

Thus, Europe was carried towards a new and scary destination: continent-wide war.

Indeed, in the wake of World War I, British diplomat-turned-academic C.K. Webster argued that the basic mistake of the Congress of Vienna was “the discouragement of the idea of self-government.” Webster continued, “It was this policy, that made the subsequent national movements take strange paths, instead of being an expression of the people’s desires.”

Of all the regimes forcing populist movements to take strange paths, perhaps the strangest and most cynical was the one in Vienna. The Habsburg Empire—after 1848, the Austro-Hungarian Empire—proved to be a continuing concerto of ethnic manipulation, combined, of course, with faltering collective power. As such, Austria-Hungary stands as a particularly eerie prefiguring of today’s European Union.

Still, as sage observers have argued, the dream of a united Europe will always endure, at least in the minds of would-be Charlemagnes. Of course, such an imperium requires a fist—the more mailed, the better.

So as with the fate of Macron’s government in France, the future of the EU might well depend on the willingness of its rulers to get tough—that is, converting the democracy deficit into an outright tyranny surplus.

Could they? Would they? The only thing we know for sure is that it’s happened before.