Does the Unfortunate 20th Century Foretell a Worse 21st? 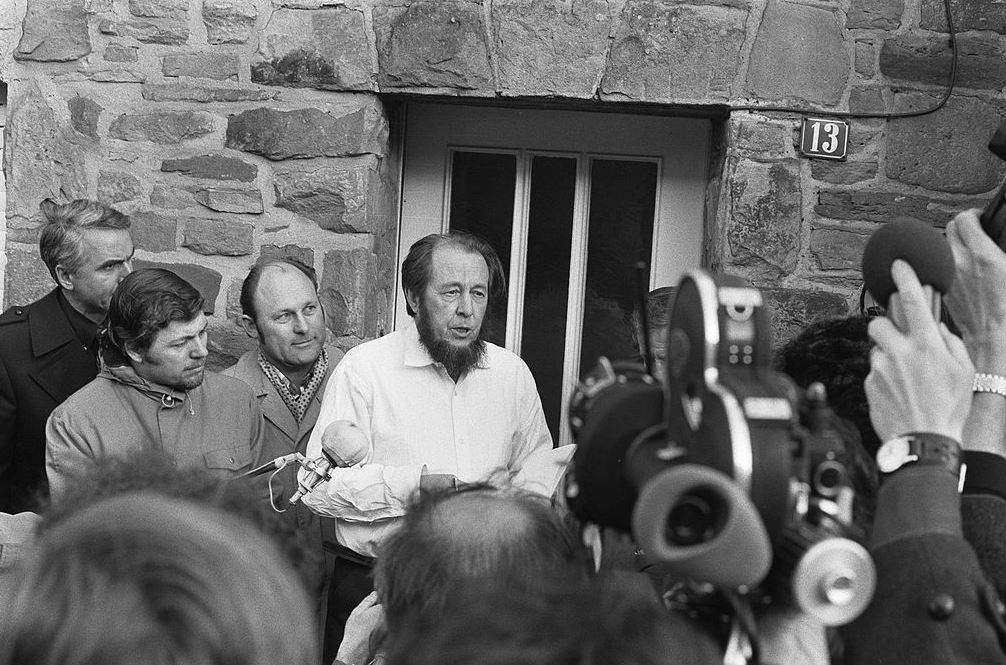 On the centenary of his birth, we see that Aleksandr Solzhenitsyn was right, not once but twice.

In appearance he was more akin to an Old Testament prophet—Jeremiah, say—than a Nobel Prize-winning Russian dissident writer, a man who had emerged from his long captivity in the Soviet Union only to find the supposedly superior West wanting as well. Honored as the author of The Gulag Archipelago, which finally persuaded even the most diehard of the Stalinist apologists that the USSR left something to be desired in the human rights department, Aleksandr Solzhenitsyn came to be feared in his adopted homeland of America for his coruscating indictment of materialism and its handmaiden, atheism.

Solzhenitsyn, who died in 2008 in Moscow—he outlasted the regime that had seized control of Mother Russia by more than a decade—brought the same gimlet eye to the United States that had landed him the gulag. The West, he said, was every bit in as much danger of losing its soul as the Russians had been after the Bolshevik revolution, and he foresaw much the same fate for us as occurred under Marxism. Worse, we will have deserved it, because we embraced the diabolical tenets of materialism freely, rather than having them forced upon us by a murderous band of psychopathic ideologues.

The author gave full voice to these sentiments in several speeches, including a 1978 commencement address at Harvard (“A World Split Apart”) that rocked listeners with its frank criticism of Western values, as well as in his Templeton Prize for Progress in Religion speech in London in 1983. Of the Harvard speech, he later reflected:

Western society in principle is based on a legal level that is far lower than the true moral yardstick, and besides, this legal way of thinking has a tendency to ossify. In principle, moral imperatives are not adhered to in politics, and often not in public life either. The notion of freedom has been diverted to unbridled passion, in other words, in the direction of the forces of evil (so that nobody’s “freedom” would be limited!). A sense of responsibility before God and society has fallen away. “Human rights” have been so exalted that the rights of society are being oppressed and destroyed.

And above all, the press, not elected by anyone, acts high-handedly and has amassed more power than the legislative, executive, or judicial power. And in this free press itself, it is not true freedom of opinion that dominates, but the dictates of the political fashion of the moment, which lead to a surprising uniformity of opinion . . . . The reigning ideology, that prosperity and the accumulation of material riches are to be valued above all else, is leading to a weakening of character in the West, and also to a massive decline in courage and the will to defend itself, as was clearly seen in the Vietnam War, not to mention a perplexity in the face of terror. But the roots of this social condition spring from the Enlightenment, from rationalist humanism, from the notion that man is the center of all that exists, and that there is no Higher Power above him. And these roots of irreligious humanism are common to the current Western world and to Communism, and that is what has led the Western intelligentsia to such strong and dogged sympathy for Communism.

Strong medicine, and one that was not swallowed easily. Nor would it be today. Pinning the decline of morality—really, a loss of the sense of the transcendent—on the Enlightenment was a bold stroke, and a controversial one, since the modern democratic West traces its lineage directly to the 17th and 18th centuries. But it was in the Templeton speech that the Russian Orthodox Christian really let loose, warning the West of the dangers of its progressive, secular, and atheistic politics:

More than half a century ago, while I was still a child, I recall hearing a number of older people offer the following explanation for the great disasters that had befallen Russia: “Men have forgotten God; that’s why all this has happened . . . ”

And if I were called upon to identify briefly the principal trait of the entire 20th century, here too, I would be unable to find anything more precise and pithy than to repeat once again: “Men have forgotten God.” The failings of human consciousness, deprived of its divine dimension, have been a determining factor in all the major crimes of this century. The first of these was World War I, and much of our present predicament can be traced back to it. It was a war (the memory of which seems to be fading) when Europe, bursting with health and abundance, fell into a rage of self-mutilation which could not but sap its strength for a century or more, and perhaps forever. The only possible explanation for this war is a mental eclipse among the leaders of Europe due to their lost awareness of a Supreme Power above them.

The author went on to arraign the post-World War II peace in Europe which, sheltered by the American nuclear umbrella, was lulled into a false sense of its own secular security, untethered to human reality. We can see the effects of this sensibility today, when the countries of western Europe—Britain, France, Germany, have ceased to prize their own cultural uniqueness, mistake citizenship for nationality, and are admitting hordes of non-western, non-Christian aliens in the belief that they, too, will become “Britons,” “Frenchmen,” and “Germans.”

It was Dostoevsky, once again, who drew from the French Revolution and its seeming hatred of the Church the lesson that “revolution must necessarily begin with atheism.” That is absolutely true. But the world had never before known a godlessness as organized, militarized, and tenaciously malevolent as that practiced by Marxism. Within the philosophical system of Marx and Lenin, and at the heart of their psychology, hatred of God is the principal driving force, more fundamental than all their political and economic pretensions. Militant atheism is not merely incidental or marginal to Communist policy; it is not a side effect, but the central pivot. To achieve its diabolical ends. Communism needs to control a population devoid of religious and national feeling, and this entails the destruction of faith and nationhood.

The West has yet to experience a Communist invasion; religion here remains free. But the West’s own historical evolution has been such that today it too is experiencing a drying up of religious consciousness. It too has witnessed racking schisms, bloody religious wars, and rancor, to say nothing of the tide of secularism that, from the late Middle Ages onward, has progressively inundated the West. This gradual sapping of strength from within is a threat to faith that is perhaps even more dangerous than any attempt to assault religion violently from without.

Imperceptibly, through decades of gradual erosion, the meaning of life in the West has ceased to be seen as anything more lofty than the “pursuit of happiness,” a goal that has even been solemnly guaranteed by constitutions. The concepts of good and evil have been ridiculed for several centuries; banished from common use, they have been replaced by political or class considerations of short-lived value. It has become embarrassing to state that evil makes its home in the individual human heart before it enters a political system. Yet it is not considered shameful to make daily concessions to an integral evil. Judging by the continuing landslide of concessions made before the eyes of our very own generation, the West is ineluctably slipping toward the abyss.

At the time, these words were received with some disbelief; of all the nations of the West, America was the most solidly religious. How could we fall into the abyss? And yet the same forces that began as secular humanism in Europe—Settembrini, one of the two principal influences on Hans Castorp in Thomas Mann’s masterpiece, The Magic Mountain, is its very oleaginous embodiment—and then turned to militant atheism have also been at work here, with the result that one of our two major political parties have become, in effect, the atheist party, happily willing to boo God.

The prophet did not live long enough to see his words about the West come true; he didn’t have to. He knew the truth whereof he spoke, having seen it occur in Russia. But he left us with a solution, one which we seem presently disinclined to adopt: “To the ill-considered hopes of the last two centuries . . . we can propose only a determined quest for the warm hand of God, which we have so rashly and self-confidently spurned. Only in this way can our eyes be opened to the errors of this unfortunate 20th century . . . But it is during trials such as these that the highest gifts of the human spirit are manifested. If we perish and lose this world, the fault will be ours alone.”

Will the 21st century be even more unfortunate than its predecessor? With the West abandoning its centuries-old faith, just as one almost as old rises up to challenge and extinguish it, what do we propose to substitute? Secular humanism is no match for jihad. The end result of moral nihilism, as the Soviets demonstrated, is death and destruction on an industrial scale; if man is the sole measure of all things, we are in bigger trouble than we know—because, God knows, left to our own devices, we’re just not up to the task.