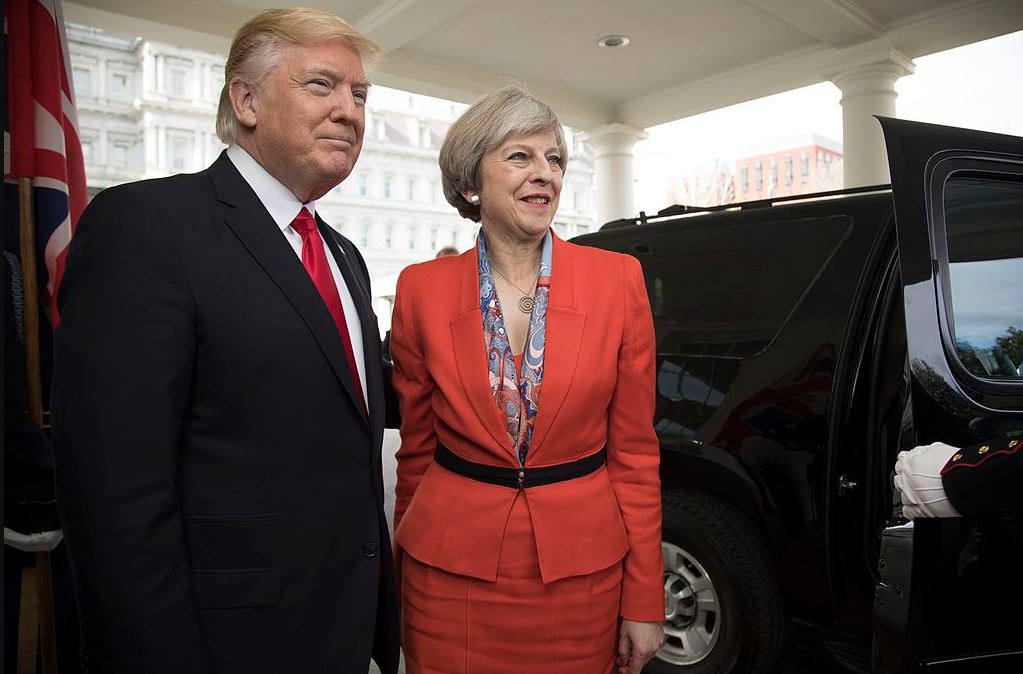 On June 23, 2016 the British people, in a sovereign state called the United Kingdom (consisting of England, Scotland, Wales and Northern Ireland), voted in a national referendum to decide whether they should remain in the European Union (EU).

They voted to LEAVE.

What should Americans care?

He just said, “The withdrawal agreement “sounds like a great deal for the EU and by that he meant the UK might not be able to trade with the US.

Sovereignty can be defined in jurisprudence as the full right and power of a governing body to govern itself without any interference from outside sources or bodies.

It is clearly not our choice what the UK does, but we want the best for them and the British people.

President Obama, you might remember, spent a few days in London with Prime Minister Cameron lobbying and campaigning hard for the Remain vote.

Picture this: a foreign leader intervenes in a sovereign decision of another state. How would Americans feel if some other distant world leader, say, Emmanuel Macron or Robert Mugabe, came here to tell us what to do?

Obama said Britain would “go to the back of the queue” (line, in British parlance) in US interests if they did not vote to stay in Europe.

He trotted out every argument in the book also suggesting his globalist TTIP trade negotiations with Europe would be damaged, if the vote went to Leave.

Now honestly there are reasons for and against BREXIT and the forces were about equally split. The vote came down to 52% Leave and 48% Remain.

One side won — which is what happens in a political referendum.

One side, using figures from HM Treasury, (albeit a government agency) suggested it would cost Brits jobs, economic growth and about $4000 per head by 2030, if they vote to leave Europe. The calculations have been questioned and the models seem a slight bit dire. It was called, “Project Fear.”

They lost even though Prime Minister May was a Remainer.

The euro-skeptics, on the other hand, said nonsense, that the cost of leaving is slight and the benefits of independence and a secure immigration policy outweigh the pro-European position.

They said the bureaucracy and budgetary costs (estimated at the equivalent of $500 million a week) of staying in Europe — were far too expensive.

The Common Agricultural Policy (CAP), the EU’s most expensive policy, accounts for 40 per cent of the EU budget—raising consumer prices by protecting inefficiency.

They also calculated that the EU prevents the UK from other open trade, costing the UK about 4 percent of GDP to the economy.

Further, for them, the euro zone crisis demonstrates what happens when ill-matched economies enter into a monetary union. Greece, among other countries, has witnessed severe consequences.

Two years ago few people thought the Brits would actually leave Europe; but today, after a rise in populism worldwide and growing nationalist sentiment, it is a foregone conclusion. And many more people have come to the conclusion that the country is better off untied from Brussels and its undemocratic and bureaucratic ways.

The idea that the Anglo-Saxons are Continentals has itself long been contested (since at least 1066) and European identity, let alone the flawed integrationist machinery of the Brussels experiment, is roundly questioned; well, detested might be closer to the prevailing view — even in other parts of Europe.

The elite that dominates EU decision-making is social democratic, managerial, bureaucratic, and socialist with a view to higher taxation and redistribution of wealth.

But from an American perspective should we truly care?

Do we really have a dog in this fight?

Former London Mayor, the ever colorful, Boris Johnson, who wants himself badly to be the next Prime Minister, said that, the Obama position was “ridiculous “and that his views on the subject reflect a “part-Kenyan heritage”… “driving him toward anti-British sentiment.”

He has called Prime Minister May’s latest deal with Brussels, negotiating withdrawal from the EU, nothing short of a making Britain into a “Vassal State.”

Nigel Farge, the ex-leader of the nationalist UKIP party, went further and told Obama to, “butt out.”

More recently he has decried Mays’ deal as “the worst deal ever.”

The question US citizens should puzzle is this: would they want the United States to join anything like the EU—a federal superstate that curtails sovereignty?

Reread the definition provided and you decide.

Of course the answer is, NO.

We wouldn’t want that in any way, shape or form.

And the British already, under Margaret Thatcher, decided not to become part of the flawed Euro currency and the European Central Bank. They have a kind of halfway house. In — but not all the way — in. And Europe, make no mistake, wants a complete political union as its end game.

They have done everything to force unfavorable terms on the UK in their long negotiations.

So here’s an interesting and novel alternative no pundit is yet suggesting and I say it only half facetiously.

If our Very Special Relationship partners (forgetting the War of Independence as a spat between cousins, as well as their torching of the White House in 1812) don’t want to be Europeans (the island apart argument and Churchill’s notion of the English speaking peoples) — why not give them two other viable alternative choices?

The United Kingdom could join our newfound agreement with Canada and Mexico and we would rename it the North Atlantic Free Trade Agreement. Nothing to sneeze at and no costs attached, just a bigger free trade zone. No superstate attached.

Or, more radically, and I jest not (well, maybe), give the UK 51st statehood status and a proportional number of members of Congress with two Senators.

That would make our relationship truly special.

Hell, throw in an NFL franchise for London, too. We like the Queen, so she could have some honorific role. How about Queen of Queens?

British culture, food, and sport would all dramatically improve and together we would win all the Olympic medals.

Ha… something to consider?

Seriously, we all should recall a profound speech given by then former Prime Minister, Winston Churchill, in 1946, at Westminster College, in Fulton, Missouri.

It was perhaps his most significant post-war speech, where he launched both the phrases, iron curtain“ and “special relationship “ into popular currency.

He said the two countries shared a common history, a common language, and a common literature and that in the course of the twentieth century we’d twice been on the same side in wars to defeat tyranny and dictatorship and for liberty and freedom.

Our mutual and abiding interests, common worldview, congruence of sympathies, and the undeniably unique heritage of the Anglo-American tradition of LIBERTY is our true future together.

With a shared Whig history, the King James Bible, the Anglican Church, long historical memory — all of these things make up a valuable Anglo-Atlanticist patrimony.

Britain belongs there, not in Europe.

The twenty-first century will much need such Anglo-American leadership more than ever before. Perhaps, herein lie the sinews of lasting peace.

Theodore Roosevelt Malloch is author of the new memoir, DAVOS, ASPEN & YALE: My Life Behind the Elite Curtain as a Global Sherpa, WND Books, 2016. This article has been republished with permission from Gateway Pundit.