Why Do Black Friday Shoppers Throw Punches Over Bargains?

Black Friday, the most celebrated shopping day of the year, abounds with tales of fistfights over discounted televisions or even stampedes as consumers rush to get that low-priced sweater they saw in an ad.

Many people chalk it up to bad behavior. But marketers like me have a term to describe one feeling that contributes to it: psychological ownership.

Have you ever felt as if another driver stole your parking spot? Or were supremely miffed when someone else nabbed the last red sweater that you had your eye on? And isn’t it irritating when someone else receives credit for your idea? If so, you experienced psychological ownership.

In other words, we often take ownership over a thing or service in our minds before we actually give up the cash that makes it legally ours. And retailers use this psychological trick to get us to buy more of their stuff – or spend more. It also makes us more likely to brag about our purchases, valuable word-of-mouth advertising for those brands.

While the concept itself is well-known, there’s been little research on how people actually react when someone seems to infringe on their psychological ownership. My colleagues Joann Peck and Scott Swain and I conducted several studies to find out. 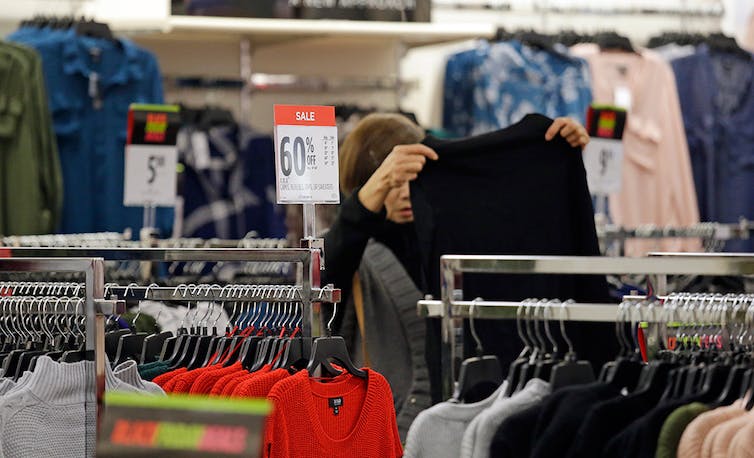 All it takes is a touch to elicit psychological ownership of a product. AP Photo/Elaine Thompson

That feeling that something is yours

Psychological ownership is an important concept in marketing. Sellers are motivated to elicit it because having it makes you want to buy their goods.

An example of this is potato chip maker Lay’s “Do Me a Flavor” contest, which began in 2008 and invited customers to suggest and vote on new chip flavors. By tickling customers’ sense of ownership in the product and the brand, it was a remarkable success in markets around the world.

But it doesn’t have to be a major campaign. A simple ad or invitation to touch can have the same impact.

There are three factors that foster psychological ownership:

Furthermore, you can feel psychological ownership over pretty much anything that doesn’t legally belong to you, from the last chocolate truffle in a display case to the dream home you found on Zillow, and even intangible things like ideas.

To find out how people react when their psychologically owned property is threatened, my colleagues and I conducted a series of experiments. Each was designed to elicit or manipulate feelings of ownership in consumers and then have other people communicate, or signal, psychological ownership of the same product.

In the first one, 58 college students participated in a simulated dining study in our lab. At one point, they each poured themselves a cup of coffee from a bar and customized it with condiments like sugar, frothed milk and syrup, which helped create strong feelings of ownership of the coffee.

Later, after serving participants a piece of cake at their table, a waiter asked, “Is everything OK?” The waiter also, in half the cases, moved their coffee cup for no apparent reason.

After the “bill” came, we found that participants whose coffee cup was moved tipped the server 25 percent less. In a subsequent survey, these participants reported that they felt the server had infringed on their territory and said they’d be less likely to return to such a restaurant.

A second experiment extended this territorial feeling to something less tangible: an artistic design. As part of volunteer work for a local nonprofit, 162 university students decorated folders for children’s educational materials. They either copied a design onto the folder – which elicits low psychological ownership – or created their own design – leading to high psychological ownership. After they finished, a staff member walked up to half the participants and said, “That looks like my design!”

Later, as the staff member left the room, she “accidentally” dropped a pen, supposedly without noticing. We found that participants who designed their own folder and were told by the worker that it looked like hers were 66 percent less likely to pick up the pen and return it.

A later survey showed that these participants indeed felt that the staff member infringed on what they considered theirs. As a result, they were also less likely to donate to the nonprofit or volunteer again.

Interestingly, they reported they would be more likely to post a selfie with their folder on social media – in other words, they tried to defend their psychological ownership by communicating their own claim to ownership. 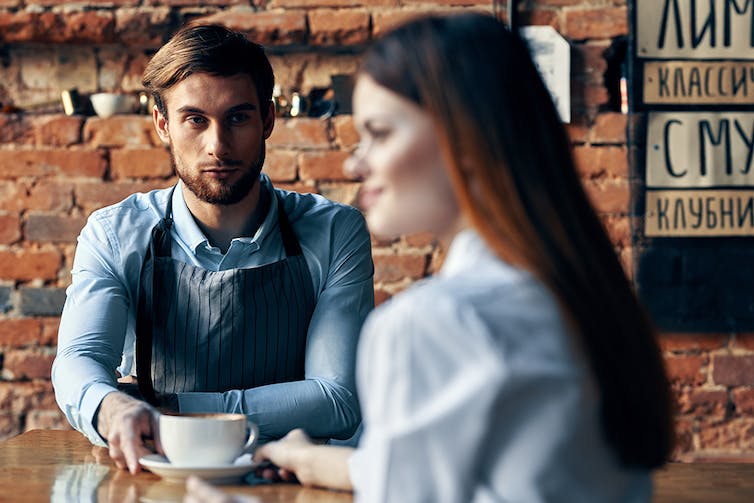 Other similar experiments showed there are some limits to psychological ownership and who’s more susceptible.

One such experiment, conducted online, involved asking participants to imagine they were queuing to buy a comfy sweater for an upcoming social event and told to close their eyes and picture themselves wearing it. They were then told, at random, to imagine either that another customer reached out and touched the sweater or asked permission to do so. We found that asking first reduced the participant’s feeling of infringement and tendency to respond territorially.

In a separate experiment, we wanted to see if more narcissistic people were more likely to respond territorially when someone infringed on their “property,” in this case a delicious-looking pizza. We elicited psychological ownership of the pizza by asking participants to imagine they had traveled a long distance just to get it.

As they were standing in front of the pizza stand, a stranger came up and said either “I am not familiar with this pizza” or “I know this pizza well. I call this pizza ‘Antonio’” – the latter phrase meant to signal ownership. At the end of the survey, we measured narcissism using a common personality scale.

We found that customers who scored high on narcissism expected others to be more aware of their feelings of ownership. Thus, they were more likely to feel infringed upon and respond territorially to the stranger who signaled ownership. 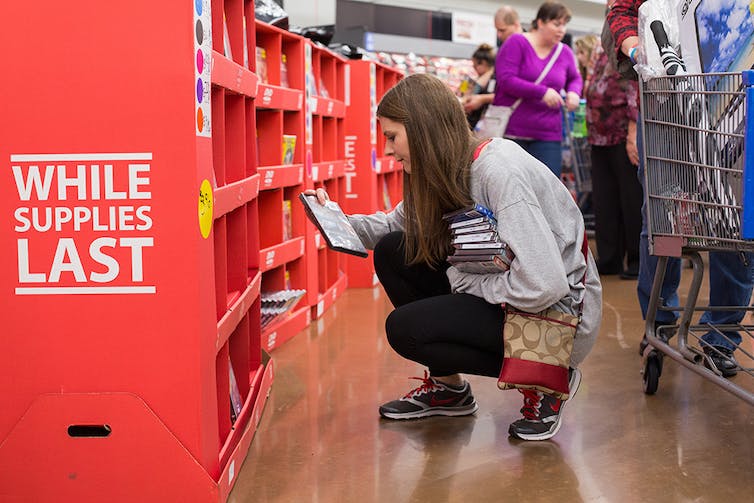 Scarcity of a product can make it more likely to create conflict over psychological ownership. Gunnar Rathbun/Invision for Walmart/AP Images

Together, these studies demonstrate we really don’t like it when others show signs of ownership of something we feel is “ours,” particularly if we believe they should know of our prior claim. Furthermore, we might retaliate when given a chance.

Consumer responses when this happens can vary from simply abandoning the location to talking badly about the business or person involved. In other words, companies that play on this feeling of psychological ownership to spur sales should bear in mind that there’s a cost as well, particularly when a product or its low price is scarce, such as on Black Friday.

So as you hunt for bargains in the coming weeks, bear in mind that psychological ownership sets in long before a cashier puts your stuff – or a fellow shopper’s – in a bag. My best advice is be polite. There’s usually enough for everyone.

Colleen P. Kirk, Assistant Professor of Marketing, New York Institute of Technology. This article is republished from The Conversation under a Creative Commons license. Read the original article.