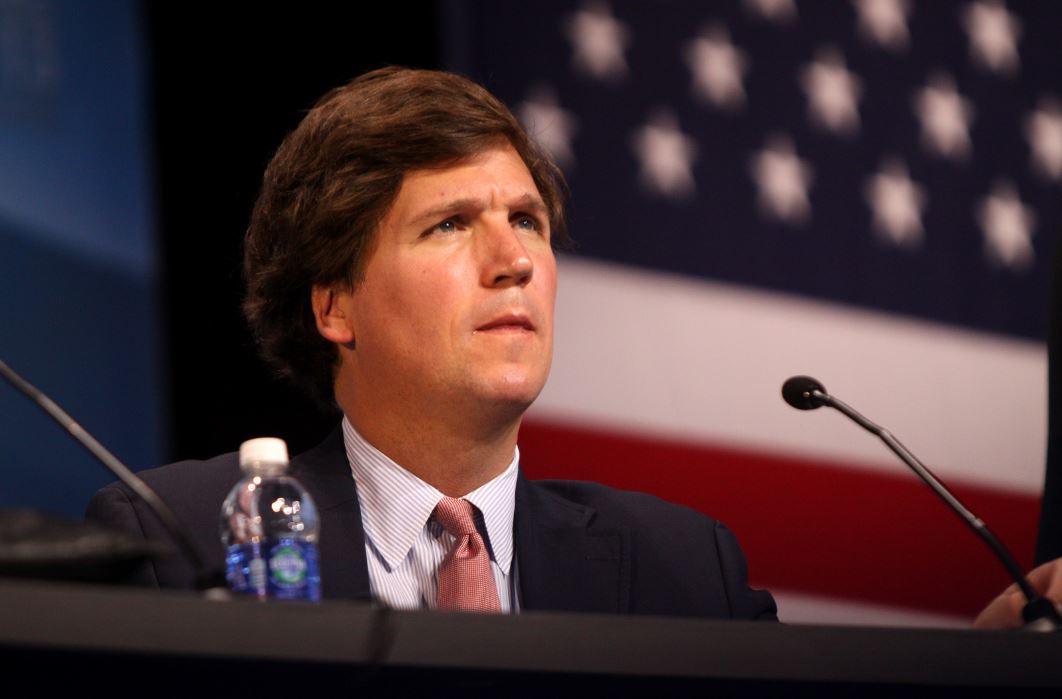 The mob broke Carlson’s front door. A video captured one protester saying she wished she had a pipe bomb.

Most consider Carlson a mainstream conservative commentator, but Antifa mobs see no room for any views other than their own. Although police arrived, they made no arrests while promising an investigation.

“Tactically unwise” were the words Matthew Yglesias used to describe the protest. Yglesias, the co-founder of Vox, added, “I honestly cannot empathize with Tucker Carlson’s wife at all…I am utterly unable to identify with her plight on any level.” In other words, if you don’t agree with Yglesias, you get what you deserve when a vigilante mob arrives.

This past summer, CNN anchor Chris Cuomo provided a moral justification for mobs like the one outside Carlson’s home. “People who show up to fight against bigots are not to be judged the same as the bigots, even if they do resort to the same petty violence,” Cuomo said.

He argued: “When someone comes to call out bigots, and it gets hot, even physical, are they equally wrong as the bigot they are fighting? I argue, no. Fighting against hate matters.” Cuomo’s words provide succor to violent thugs.

The thugs outside Carlson’s home believe they are fighting hate. Cuomo justifies their actions, saying, “Those who oppose [hate] are on the side of right.”

Apparently, Cuomo believes he can define who purveyors of hate are. Are those who oppose a $15 minimum wage guilty of “economic violence” against the poor? Are those opposed to gender-neutral locker rooms in public schools guilty of harming transgender youth?

We can turn things around and ask Cuomo: Would you understand violence against Women’s March organizers who stand with the proud anti-Semite Louis Farrakhan? We know the answer to this question is no. Cuomo is really justifying violence against those with whom he disagrees. Cuomo and Yglesias are sliding fast down the slippery slope of arguing “noble” ends justify any means.

For argument’s sake, let’s see the protesters at Carlson’s home as they would like to see themselves—decent, caring people concerned about others. Heed the warning of 19th-century historian Henry Adams: “It’s always the good men who do the most harm in the world.”

In his book Evil: Inside Human Violence and Cruelty, psychology professor Roy Baumeister explains how “Idealism leads to evil primarily [when] good, desirable ends provide justification for violent or oppressive means.” The antidote, Baumeister advocates, is to judge your methods by the same standard you used to judge your goal: “Evil is not likely to result when people firmly believe that ends do not justify means. If they evaluate their methods by the same lofty standards by which they judge their goals and purposes, evil will be held in check.”

In other words, as Baumeister writes, idealism enacted with coherence to virtue prevents evil behavior: “Under normal circumstances, morality, virtue, and idealism are powerful internal brakes that prevent people from harming others. Morality supports self-control and, by doing so, helps to prevent evil.”

However, when idealists eschew restraint and turn to evil, their violence becomes merciless. Baumeister explains:

In idealistic evil, on the other hand, moral virtue and idealism remain in force—but they support the committing of violent or evil deeds. That is what often makes idealistic evil especially bad: The traits of inner conscience and strength of character operate to spur the perpetrator on to more severe and intense deeds. It is not simply that it becomes acceptable to hurt others—it becomes one’s sacred obligation to do so. When inflicting violent harm goes from being a right to being a duty, it is fair to expect that the violence will become relentless and merciless.

Baumeister seems to describe to a tee the Antifa mob outside Carlson’s home.

If You are Not With Us, You are Against Us

When Yglesias callously announced he felt no empathy for Carlson’s family, he was placing them in a different category from even an ordinary stranger. If on a city street Yglesias were to encounter an angry mob surrounding a stranger, I’d like to think he would call 911, as a normal person would respond. He wouldn’t first inquire into the stranger’s political views. Yet Yglesias dehumanized the Carlson family. Now the Carlsons are “others” for whom the rules of human decency don’t apply.

Baumeister’s research calls out a chilling warning of what happens when we place some people in the category of “others”:

There is ample evidence that perpetrators of violence learn to detest their victims. Thus, state torturers are selected partly on the basis of their ideological purity, and they are taught that their victims are part of a dangerously powerful movement that aims to destroy their country. They learn (and one must assume that they are willing to accept) that their enemies in general are evil…

Nazis called their Jewish countrymen vermin. Hutus in Rwanda called Tutsis cockroaches. Dehumanizing others is a means of conditioning the perpetrators of state-sponsored murder to believe they are not committing crimes against humanity.

The mob outside the Carlson home stopped short of inflicting physical violence on family members. Yet they were drinking from the poisonous well of dehumanizing others. Once you swallow that poison, your mind can justify horrendous actions. Terrorists, Baumeister points out, reject the idea that they ever harm innocents:

Sentiments such as “anyone who is not with us is against us” are popular with such groups, because they conveniently allow the group to despise all their victims as enemies. Likewise, terrorists tend to adopt very broad categories of enemies.

Idealists are capable of extreme actions when they believe they are fighting a “dangerous and powerful opponent.” As Baumeister explains, “Idealistic perpetrators believe they have a license, even a duty, to hate”:

Holy wars tend to be more brutal and merciless than ordinary wars, and the reason for this is now apparent. When fighting against the forces of evil, there is no reason to expect a fair fight—and hence no reason to fight fair oneself. Idealists think they are up against a dangerous and powerful opponent who will stop at nothing to spread evil in the world, and so desperate and extreme measures are appropriate.

The same individual actions that brand someone as a “dangerous nut” may find “support and encouragement” in groups like Antifa. Baumeister points out that idealistic evil “is nearly always fostered by groups.” His observations are chilling:

Abstract conceptions of how things ought to be gain social reality from the mere fact of being shared by a group. Without that group context, they are merely the whims of individuals, and necessary to have someone else tell you that violent means are justified by high ends. If no one of importance agrees with you, you will probably stop short of resorting to them. But if you belong to a group that shares your passionate convictions and concurs in the belief that force is necessary, you will be much more likely to resort to force. People seem to need others to validate their beliefs and opinions before they put them into practice, especially in a violent and confrontational way.

In my FEE essay, “How the Heir of the White Nationalist Movement Learned to Let Go of Hatred,” I covered white nationalist haters. Antifa haters are not their moral betters. As for the media enablers of Antifa, such as Cuomo and Yglesias, now is the time to reflect on where their justifications of evil can lead. History is clear: When the ordinary restraints of civil society no longer apply, there is no forecasting who will be caught in the resulting web of hatred.