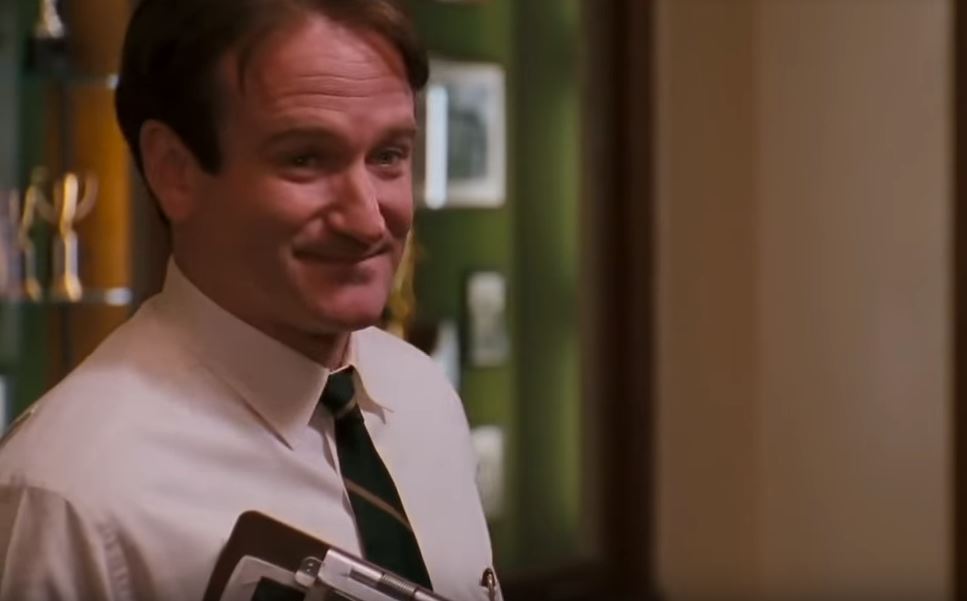 He’s an actor we all remember fondly, playing one of the most beloved characters in recent cinematic history in a movie that few in my chosen field of study, English Literature, regard as anything short of scripture.

I’m speaking, of course, of Robin Williams and his role as John Keating in “Dead Poets Society,” a 1989 coming-of-age drama placing Williams as an inspirational English teacher at an elite, all-boys prep school.

Keating is well known for urging his students to be bold non-conformists and to “Make your lives extraordinary.” He’s also a reprehensible person pushing a bankrupt philosophy.

He’s bad at his job too. Keating’s poetic quotations are cherry-picked almost exclusively from Romantic poets like Walt Whitman, and he seems perfectly willing to simply skip over any poetry that doesn’t fit with his personal philosophy of life. Worse still, as Roger Ebert points out in his review of the film, “none of these writers are studied… they’re simply plundered for slogans to exhort the students toward more personal freedom.” Keating seems to totally disregard the fact that Welton Academy hired him to teach his students literature, not to be their life coach.

Against Welton’s code of “Tradition, Honor, Discipline, and Excellence” (values that Virgil, one of the greatest poets of all time, devoted his Aeneid to championing), Keating works to turn his pupils into “free-thinkers.” His opponents, among the faculty and the students’ parents, are consistently caricatured as tyrants seeking to lobotomize the children, turning them into identical bourgeois automatons. Obviously, mindless conformity to man-made rules and structures is bad, but doesn’t it seem obvious that the purpose of education must be to form minds as well as free them?

By placing himself entirely on the latter end of that spectrum, Keating perfectly parrots the educational philosophy of the 18th-century French philosopher Jean-Jacques Rousseau. Rousseau’s famous statement that man is “born free” but is “everywhere in chains” reveals his belief that societal expectations are inherently evil and that education must liberate the student from the repressive society in which he lives.

A system of education that treats tradition and oppression as synonymous will inevitably produce unfeeling skeptics, men without chests who cannot bring themselves to commit to anything larger than themselves for fear of losing their unique, innate, “extraordinary” quality. For these young narcissists, religion, family, and community are reduced to obstacles in the personal quest for self-actualization.

The students we meet in “Dead Poets Society” begin the movie with a healthy sense of irony, but once Keating shows up to turn them into a bunch of pseudo-intellectual beatniks (a phase which every adolescent should go through, but which a grown and educated man has no business endorsing) things quickly turn tragic.

The first sign of trouble comes when Knox Overstreet, one of Keating’s students, falls for a girl named Christine. She has a boyfriend, but that doesn’t matter. Knox will follow Keating’s advice and “seize the day!” He manages to get himself invited to a party at her house, where she passes out on a couch and he literally whispers “carpe diem” to himself before kissing her. Sure, kissing an unconscious woman is clearly inappropriate, but that doesn’t matter to an extraordinary young man like Knox.

The movie reaches its climax when Neil Perry, another student inspired by Keating’s vapid mumbo-jumbo, commits suicide after his father insists that he become a doctor instead of pursuing acting. One student commits sexual assault and another ends up dead. That’s the legacy of Keating’s philosophy.

Examples of the destructive consequences of this narcissistic, Rousseauian worldview are everywhere. In John Updike’s novel Rabbit, Run, former high school basketball star Rabbit Angstrom feels a divine calling to find something better than boring old everyday life. It’s easy to picture Keating cheering Rabbit on as he leaves his wife and moves in with a prostitute, pushing his wife into an alcoholic despair that ends with her accidentally drowning their newborn in the bathtub. “If you have the guts to be yourself,” Updike wrote, “other people’ll pay your price.”

In the Broadway musical Pippin, the eponymous character falls under the sway of a mysterious character known only as the Leading Player, who eggs him on to make his life extraordinary by finding his “corner of the sky.”  Over the course of the play, Pippin engages in disgusting sexual debauchery, murders his father, and abandons his lover and her son. When all hope seems lost, the Leading Player, who by this point has revealed himself to be nothing short of diabolical, offers the final act of narcissism, the ultimate assertion of being too good for this world: suicide. It is only at this point that Pippin comes to realize that “if I’m never tied to anything, I’ll never be free.”

Even Rousseau himself refused to marry his mistress and forced her to give up all five of the children they had together. But hey, a rolling stone gathers no moss, right?

Keating’s lie is so attractive because it is built on a kernel of truth. Yes, we should develop our God-given talents; no, we should not blindly accept whatever we are told. But unless we acknowledge the limitations of tradition, duty, and community, we will lead lonely, selfish lives, hurting everyone around us in the process.