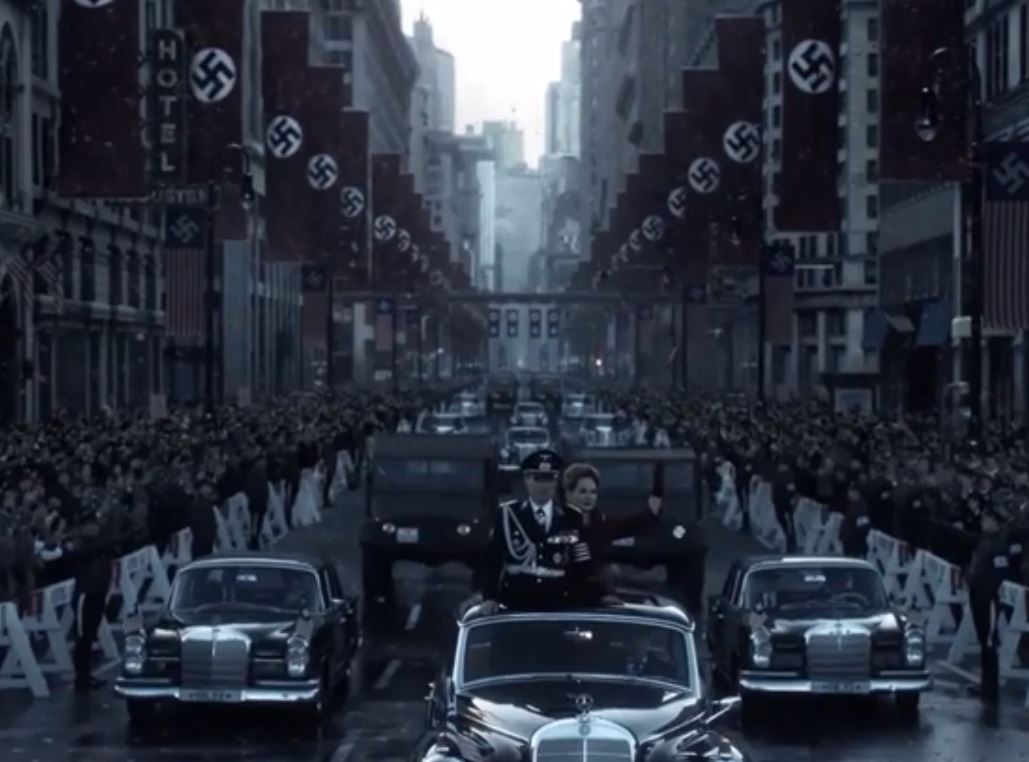 United States, 1962. It’s been 15 years since the Nazis dropped an atomic bomb on Washington D.C., forcing the US government to surrender to the Axis powers. The United States is now divided into two vast provinces, each of which is controlled by the two world-ruling empires: the Greater Nazi Reich and the Japanese Empire.

The story revolves around Juliana Crain, an American living in the Japanese Pacific States. Juliana gets involved with the Resistance (an underground movement that fights the Japanese and the Nazis alike) after the secret police kill Trudy, her only sister.

Before dying, Trudy gives Juliana a mysterious film that contains a newsreel of the Allies winning the war, something that never happened in Juliana’s reality. After that, Juliana is dragged into a war that she didn’t want to fight; a war that leads her to confront the Nazis, the Japanese and even the Resistance in her search for truth and justice. The action takes place between San Francisco, New York, and the Neutral Zone (the unoccupied territory between the two American provinces), although it occasionally moves to Berlin, the capital of the Reich.

For history lovers, the series answers a fascinating question:What would have happened if the Nazis and their allies had won the war? By doing so, it creates an alternate reality in which many World War II criminals that either committed suicide or were tried and executed in Nuremberg are still alive, including Himmler, Goebbels, and Hitler himself. Other productions like the 90s TV movie Fatherland or the recent BBC series SS-GB are based on similar premises.

The alternate-history plot is masterfully complemented by the introduction of supernatural (maybe science-fictional?) elements, which create an atmosphere of suspense that engages the viewer from the first episode. These fantastic elements revolve around the film Trudy handed Juliana before being killed. Where did the Allied newsreel come from? Is there a parallel reality in which the Nazis and Japanese lost the war? If so, is it possible to move across different realities?

Despite the obvious differences between the fictional world of The Man in the High Castle and ours, some parallels can be drawn. The geopolitical tensions between the Nazis and the Japanese can be likened to the political, economic, and military confrontation between the United States and the Soviet Union during the Cold War era. In fact, the second season shows an incident similar to the Cuban Missile Crisis, the 1962 diplomatic conflict that almost caused a nuclear war.

Another aspect that links the dystopian reality of The Man in the High Castle to our own is the realism of the characters, who reflect the complexity of human nature. Like us, characters are repeatedly confronted with complex ethical dilemmas for which there is no simple answer. They are often obliged to choose between the lesser of two evils, which provides the plot with a sense of realism despite its fictional nature.

The Man in the High Castle tells a fascinating story of what could have been but, fortunately, never was. The Allies won the war. But had circumstances been different, we could be living in a totalitarian world today. This teaches a very important lesson that many have seemed to forget: the course of history isn’t predetermined. The constant struggle to preserve our liberties is today as important as it was eight decades ago.