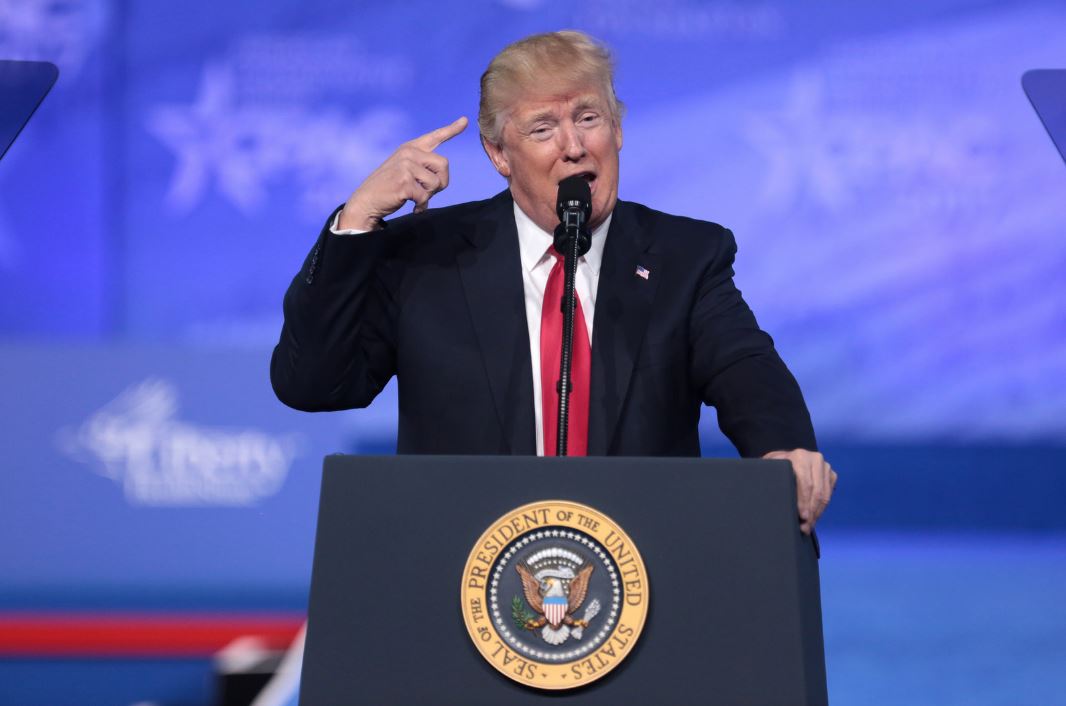 President Donald Trump defended the sovereignty of America—and every other country—before the 73rd United Nations General Assembly on Tuesday, in his second address to the world body.

To the other world leaders and diplomats, Trump delivered an unpopular message against globalism, while also calling for cooperation. He delivered tough talk to America’s enemies, while also talking about peace.

He took on major U.N. issues at the annual gathering, such as those involving the U.N. Human Rights Council and the International Criminal Court.

Borrowing from his campaign slogan of “Make America Great Again,” he called on other leaders to do the same for their citizens.

Here are the top takeaways from Trump’s U.N. speech:

1. ‘More Than Almost Any Administration’

Trump engaged in what sounded almost like campaign talk about his administration’s place in history, and got an unexpected reaction.

“Today I stand before the United Nations General Assembly to share the extraordinary progress we’ve made. In less than two years, my administration has accomplished more than almost any administration in the history of our country,” he said.

The assertion prompted laughter from the world leaders and diplomats in his audience. “I didn’t expect that reaction, but that’s OK,” the president said.

Undaunted, Trump sought to explain the progress made under his administration.

“The United States is stronger, safer, and a richer country than it was when I assumed office,” he said. “America’s economy is booming like never before.”

Trump spoke of the Syrian civil war, in which the U.S. twice launched airstrikes on the regime of Syrian dictator Bashar Assad for using chemical weapons against his own people.

“The United States will respond if chemical weapons are deployed by the Assad regime,” he said.

He noted, however, that the problems in Syria can’t be fully addressed without also addressing Assad’s chief financier, Iran.

“Every solution to the humanitarian crisis in Syria must also include a strategy to address the brutal regime that has fueled and financed it: the corrupt dictatorship in Iran,” Trump said. “Iran’s leaders sow chaos, death, and destruction. They do not respect their neighbors or borders, or the sovereign rights of nations. Instead, Iran’s leaders plunder the nation’s resources to enrich themselves and to spread mayhem across the Middle East and far beyond.”

In May, Trump pulled the United States out of the Joint Comprehensive Plan of Action, the multilateral Iran nuclear deal negotiated by the Obama administration in 2015.

Other parties to the agreement were Britain, France, Germany, China, and Russia.

“The Iranian people are rightly outraged that their leaders have embezzled billions of dollars from Iran’s treasury, seized valuable portions of the economy, and looted the people’s religious endowments, all to line their own pockets and send their proxies to wage war,” Trump said.

Although it’s unpopular with some allies, Trump noted that many countries in the Middle East support his decision to withdraw from the agreement.

“The Iran deal was a windfall for Iran’s leaders. In the years since the deal was reached, Iran’s military budget grew nearly 40 percent,” Trump said. “The dictatorship used the funds to build nuclear-capable missiles, increase internal repression, finance terrorism, and fund havoc and slaughter in Syria and Yemen.”

The U.S. has aggressively moved on sanctions on Iran, and he asked allies to join.

Trump made the case for American sovereignty—and the sovereignty of other countries—while still calling for cooperation.

Trump called for other countries to step up and share the burden of the cost for their own defense, with respect to NATO.

He also said the United States will not pay for more than 25 percent of the U.N.’s budget and specified that the U.S. would not yield to global governance on migration or the International Criminal Court.

“The United States will not participate in the new global compact on migration. Migration should not be governed by an international body unaccountable to our own citizens,” Trump said. “The only long-term solution to the migration crisis is to help people build more hopeful futures in their home countries. Make their countries great again.”

As for the International Criminal Court, “We will never surrender America’s sovereignty to an unelected, unaccountable, global bureaucracy,” Trump said. “America is governed by Americans. We reject the ideology of globalism, and we embrace the doctrine of patriotism”

The Trump administration withdrew in June from the U.N. Human Rights Council, notably made up of many member nations that are dictatorships and human rights abusers.

“We will not return until real reform is enacted,” he said.

“I honor the right of every nation in this room to pursue its own customs, beliefs, and traditions,” Trump told the gathered leaders. “The United States will not tell you how to live or work or worship. We only ask that you honor our sovereignty in return.”

4. North Korea and the Difference of a Year

In his 2017 U.N. General Assembly address, Trump ridiculed North Korean dictator Kim Jong Un as “Rocket Man” because of his erratic missile-testing and nuclear programs. This year, he asserted, “The missiles and rockets are no longer flying in every direction.”

“The United States has great strength and patience, but if it is forced to defend itself or its allies, we will have no choice but to totally destroy North Korea,” Trump said in his U.N. remarks last year. “‘Rocket Man’ is on a suicide mission for himself and for his regime. The United States is ready, willing and able, but hopefully, this will not be necessary.”

Since that time, the two met in Singapore in June to talk about the denuclearization of North Korea. Although Kim isn’t abandoning his weapons program, he has freed Americans held as political prisoners and returned the remains of American veterans of the Korean War.

“We had highly productive conversations and meetings, and we agreed that it was in both countries’ interest to pursue the denuclearization of the Korean Peninsula,” Trump said. “Since that meeting, we have already seen a number of encouraging measures that few could have imagined only a short time ago.

“The missiles and rockets are no longer flying in every direction. Nuclear testing has stopped. Some military facilities are already being dismantled,” he said.

5. Getting Tough on Venezuela

Trump called out Venezuelan President Nicolas Maduro and promised more U.S. sanctions on the regime of the South American nation.

“Today, we are announcing additional sanctions against the repressive regime, targeting Maduro’s inner circle and close advisers,” he said.

“Currently, we are witnessing a human tragedy, as an example, in Venezuela,” he said. “Not long ago, Venezuela was one of the richest countries on Earth. Today, socialism has bankrupted the oil-rich nation and driven its people into abject poverty.”

The bottom line is, Trump said, “All nations of the world should resist socialism and the misery that it brings to everyone.”

Trump also spoke of energy independence and security, and noted that energy can be a new form of “coercion and domination.”

The United States has become the largest energy producer in the world, he said, and is “ready to export our abundant, affordable supply of oil, clean coal, and natural gas.”

“OPEC and OPEC nations are, as usual, ripping off the rest of the world, and I don’t like it. Nobody should like it,” Trump said. “We defend many of these nations for nothing, and then they take advantage of us by giving us high oil prices.”

Trump pointed to Poland as an example of a country aspiring to independence from Russian energy supplies, while Germany is taking the wrong route.

“Reliance on a single foreign supplier can leave a nation vulnerable to extortion and intimidation,” Trump said. “That is why we congratulate European states such as Poland for leading the construction of a Baltic pipeline so that nations are not dependent on Russia to meet their energy needs.

“Germany will become totally dependent on Russian energy if it does not immediately change course,” he said.

7. Tough Talk on Trade and Tariffs

In another pet issue, Trump bemoaned America’s $800 billion annual trade deficit and said more tariffs and trade deal renegotiations were on the way.

“We are systematically renegotiating broken and bad trade deals,” he said.

“This is just the beginning,” he said. “Many nations in this hall will agree that the world trading system is in dire need of change.

“For example, countries were admitted to the World Trade Organization that violate every single principle on which the organization is based,” the president said. “While the United States and many other nations play by the rules, these countries use government-run industrial planning and state-owned enterprises to rig the system in their favor. They engage in relentless product dumping, forced technology transfer, and the theft of intellectual property.”

The United States recently imposed an additional $200 billion of tariffs on certain Chinese-made goods, bringing the total to $250 billion.

After China joined the World Trade Organization nearly two decades ago, the U.S. lost 3 million manufacturing jobs, about a quarter of all steel jobs, and 60,000 factories, Trump said.

“Those days are over. We will no longer tolerate such abuse,” he said. “We will not allow our workers to be victimized, our companies to be cheated, and our wealth to be plundered and transferred.”