Was Jesus a Socialist? A Conversation With Theologian David Bentley Hart and Economist Jerry Bowyer 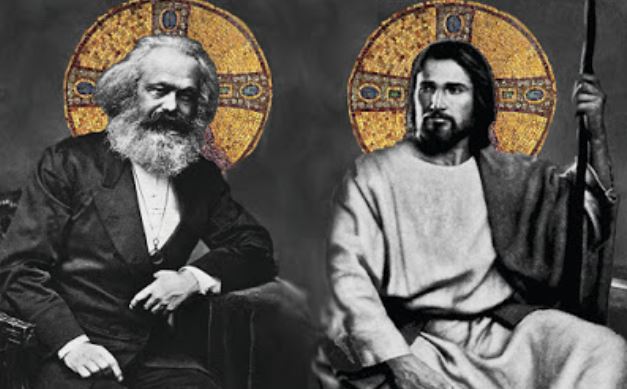 Was Jesus a socialist? Was he revolting against wealth and money itself? Or was he actually challenging people who use the violence of the state to prosper?

I have my own working framework for how to apply Jesus’s role model in politics and economics. Nevertheless, I recently spoke with fellow-travelers theologian David Bentley Hart (below) and economist Jerry Bowyer (bottom) to invite critical dialog for our society.

Dr. Hart and Bowyer share my interest in the late René Girard’s sweeping anthropological account for the origins of collective violence. Girard posits that humans ape their neighbors’ desires which leads to contagious rivalry and ultimately violent expulsion of misfits to restore social unity. In his account of history, Jesus’s performance of nonviolent unveiling of his collective murder created a counter-cultural virus which undermines the civic logic of might-makes-right wherever it spreads. Girard provides a Christocentric historical backdrop in which Hart, Bowyer, and I can assess how one should imitate Jesus in the context of the modern state’s collective violence.

As such, while Hart holds private property as rather baleful and Bowyer suggests markets are sacred human action, both largely agree with my applications of Jesus’s ethics to the state.

I argue that Jesus’s life story exemplifies his call to “not oppose the wicked man by force,” as Dr. Hart’s recently released translation of the New Testament renders Matthew 5:38. I believe that means, in part, if I want to imitate Jesus and I see my neighbor doing some wicked, nonviolent act—whether it is drug abuse, bigoted speech, discriminatory commerce, unfair wages, or resisting some economic regulation—I cannot use physical force to oppose them.

These actions may be wicked but physical force will not correct the desires driving them.

In following Jesus, it is unethical to enter my neighbor’s house with deadly force to force them to pay their employees better wages, use healthcare insurance plans I want funded, stop using a drug, or stop consensual sex work. These actions may be wicked but physical force will not correct the desires driving them. Neither will physical force abate the negative cultural effects of these behaviors.

Initiating force only creates more violence. Drug prohibition creates violent black markets. Prostitution laws prevent consenting adult workers from legal protection and forces them into the arms of gangs. Minimum wage laws only push greed underground as miserly employers harden their rapacity while entry-level workers lose job opportunities. A person forced to bake a gay couple’s wedding cake through threat of fines and imprisonment only intensifies their stance while the patrons have no way of financially rewarding bakers that would serve the product without compulsion.

There are many evils to abhor but not all evil is physically violent. In the absence of violence, we must find creative, nonviolent solutions.

When we exert force to correct nonviolent wickedness, we make the perceived evil stronger and create destructive mirror coercion in society. Jesus understood this when he offered his life and teaching for us to imitate in making community.

We have a need for law in society. It should be an extension of the physical restraint we can use to stop a person from committing physical violence or fraud. If someone is dumping toxic waste onto a neighbor’s yard, the victim can use restraint to stop it. Likewise, the victim has a right to restitution for medical and property damages.

If I discover a person selling beachfront property in Nebraska to a senile man, I can use defensive action to disrupt the fraudulent contract. If I see someone being assaulted, I can physically restrain the attacker and put them in a space away from other potential victims. There is no place for excessive force, torture, or vengeance, but one can use defensive force to stop physical violence and theft from occurring. Therefore, what is ethical for us to do as persons can be extended by consent to society as law.

Ethics scale. If it is unethical for me to enter a person’s property with deadly force to stop nonviolent vice, it is still unethical if I get the majority of the neighbors to join me. If that crowd of neighbors snowballs into a mass of millions of voters hiring agents to do it for them, it is still against the demands of Jesus.

I cannot vote for the perpetuation of laws that disobey Jesus’s way. Nor can I obfuscate my moral responsibility for voting for violence by scapegoating the police or the state as alien arbiters of immoral laws. Neither can I hide in a jury decision and vote to send a human being into a prison where violence and PTSD terrorize people for nonviolent acts.

While Hart disagrees with my views on property, he sympathizes with my view that imitating Jesus entails refusing to vote for unjust state coercion. We agree that Jesus’s model leaves no room for elective wars, sanctions, drug wars, or incarceration for nonviolent behaviors. He also shares the notion that jury nullification is something Jesus imitators would do well to employ against unjust laws.

It is encouraging to know that a theological leader like Hart understands the incompatibility of the imitation of Jesus and the state. Further dialog is needed to bridge the gap on the ethics of private property in the absence of a monopoly state.

Bowyer is helpful in noting that recent archeological discoveries in Jesus’s Galilean region suggest a different economic picture than that of dire poverty. As a tekton or carpenter, Jesus would have been relatively middling in wealth. As an artisan, he was fluent with the poor while also comfortable in the company of the affluent.

Bowyer suggests Jesus’s admonition to the rich young ruler to sell all his possessions was in the context of his use of state coercion to expropriate the poor. Similarly, Jesus’s brother James’s warning to the rich men of Jerusalem in James 5 is dealing with those who unjustly profit from state cronyism. These passages provide no license for Jesus followers to abuse their personal and economic liberty, but they also provide no justification of force to correct profligacy.

Was Jesus a socialist? No. Not in a state-forced way. He was not a crony capitalist, either. He did not violently resist the state or market. If he had a choice to vote in a ballot booth or jury box, there is no evidence to suggest he would cast a stone with the crowd. Neither should we.