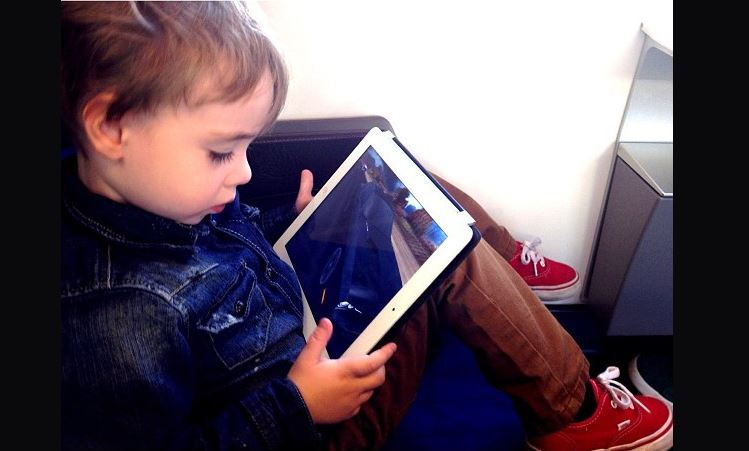 Imagine walking into a restaurant one evening. Most of the diners are families. Suddenly you notice something odd. Every single child in the restaurant—not just the babies but also the teenagers—is using a pacifier. And then you realize many of the parents are too.

Laugh if you want, but that’s more or less what I experienced while on vacation last week. My husband and I plus our two kids stayed at a large beach resort that is geared towards families. We went to dinner one night, and every single child was parked in front of a phone or tablet to watch cartoons or play video games. Every single child. It felt like a scene from “Black Mirror.”

Screens have become electronic pacifiers. Whenever a parent needs their kid to sit still, they toss them a phone. When a child is tired or acting up, out comes that magic iPad. It’s like hitting the mute button—on your child.

My toddler son recently quit his actual pacifier. He lost it while on an outing and I read that as a sign he should go cold turkey. He’d been using it way more than he should at his age. The transition went fine on my son’s end. He didn’t even seem to notice it was gone. You know who did miss it, though? Me. Whenever my son was fussing, I instinctively reached for the pacifier because up to then that’s what I’d always done. I came very close to buying him a new one on several occasions.

Electronic pacifiers work much the same way. They benefit the parent. The kid could manage just fine without them but it takes effort. Parents have a responsibility to teach their kids to handle boredom, exhaustion and other negative moments. That’s hard work. I won’t blame any parent for occasionally using a phone to get their kid to stop crying, the way I used to give my son his pacifier. Desperate times call for desperate measures. But what I witnessed on my vacation – and what parents are doing all the time in pretty much any context – goes way beyond that.

Children love cartoons and video games, of course. But it is parents who have the most say in how much time their kids will actually get to spend in front of a screen.

Most of the adults I know, myself included, have a love/hate relationship with their phones. We admit we’re slightly or very addicted and that our devices often play a negative role in our lives. We’re horrified when read the latest revelation about how our data is exploited for profit. We hate the way hours can magically disappear when we’re looking at screens. Yet we can’t live without them. If you try a Google search, you’ll be amazed at the number of articles with advice on how to control the amount of time you spend online. It’s a genre.

So parents are well aware of the problems with their own phone use. But somehow there’s a disconnect when it comes to their kids. It is just too convenient to pull out that electronic pacifier.

A refreshing perspective on this issue comes from an unlikely source: singer Sheryl Crow. She told People magazine that she strictly limits her 2 young sons’ screen time. “…I know that it’s like giving a hit off a crack pipe, and then saying, ‘How did you wind up being addicted to crack?!’” she said. That is ironic coming from a singer whose biggest hits include a song with the chorus “If it makes you happy/it can’t be that bad.”

I see kids on screens all the time, but that night at the resort made me feel sad. The whole point of a vacation is for a family to spend time together and make fun memories. None of that is going on when everyone at the table from the parents on down is buried in a phone.

The resort featured a large variety of activities. The kids would have been entertained all day. But the minute the entertainment stops, they get handed a phone. These kids are learning to tune out to a screen whenever there’s a pause in life. What is that going to look like when they’re adults?