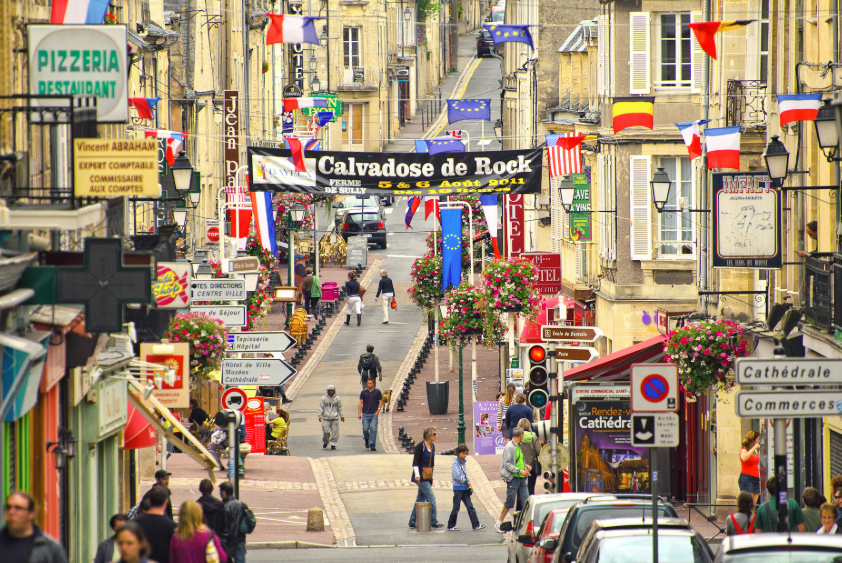 People love good streets. Americans who visit Europe often spend days simply wandering the winding streets of small towns (like this street in Bayeux, France), taking photographs, shopping in open-air markets, and experiencing a keen enjoyment of spaces—an enjoyment missing from the suburban streets of their own cities and neighborhoods (like this one near my house in Phoenix, Arizona). It does not take an urban designer to sense the difference between the streets of Bayeux and of Phoenix. But what makes a street “good”?

We don’t often stop and consider the elements, material and otherwise, that make up architecture and urban spaces. Often we think of them as simply the background against which we live, the setting for the drama of our human existence. But, like the set pieces in a play, buildings and urban spaces do much more than simply give us shelter from the elements and spaces in which to pursue our goals and dreams. These spaces are a compilation of decisions made by architectures and designers that, intentionally or not, communicate narratives about what it means to be human.

In his book The Architecture of Community, Leon Krier explores the philosophical and political undercurrents that shape architectural spaces, and (as Churchill pointed out) then go on to shape the philosophy and politics of the societies that live within those spaces. He identifies scores of elements of architecture and city/town layouts, all of which merit attention. I’ll examine just two of these elements at depth—the terminating view in street layout and the unity of form and function in building design—that have been largely discarded by modernist architects and designers.

There are a number of discernible differences between the urban landscapes noted above that profoundly affect the pedestrian’s experience—the width of the streets, for example, the number of car lanes, and the proximity of the buildings to the sidewalk. But one of the primary reasons for the differences in experience is the actual shape of the streets and their relationship to other elements of the urban landscape (buildings, open spaces, foundations, monuments, etc.). In traditionally designed towns (both small ones like Bayeux and metropolises like Rome, Istanbul, and Paris), streets adhere to the design principle of the terminating view.

The terminating view results when people looking down a street see something at the end: either a courtyard, a park, a beautiful structure, or the street gently curves so the view terminates in a row of buildings. This traditional design element does more than simply make efficient use of space; it actually tells us something significant about ourselves as humans. The anthropological lesson of the terminating view comes from its acquiescence to the reality of limitations. There is a distinct boundary to our horizons on these kinds of streets, a boundary beyond which we, limited as we are by human perception, cannot see. But the layout of the streets, gently curving away or ending in pleasant views, does not make us feel constrained. These streets render limitation itself pleasurable and even exciting, as they invite us to explore freely within clear boundaries. They draw us into more and more spaces, each of which may be limited but nevertheless feels full and inviting.

The anthropological lesson gets clearer by contrast with its modernist counterpart. Here is another example from my neighborhood in Phoenix: Indian School Road, a six-lane street that runs nearly twenty-five miles without a single curve through the middle of town. On this street, which is typical of American suburban arteries, the horizon is totally open; the view does not terminate but simply fades off into the distance. But far from being liberating, there’s little delight in this boundless view. Instead, Indian School Road evokes a feeling of insignificance; the human participants in the scene, particularly the pedestrians, creep like bugs across a massive landscape that does not change. It seems counterintuitive, but the increased scale of the streetscape actually reduces the sense of adventure or participation in it; rather than communicating that human beings are active agents exploring the limits of reality with volition and intelligence, this street tells us that, though the reality we inhabit may be virtually unbounded, our capacity to explore it meaningfully is questionable if not impossible.

Another example of how an urban landscape can communicate a particular anthropology is the relationship between the form and the function of buildings. Since the 1950s, it has become acceptable—indeed, expected—to design buildings whose function is only loosely, if at all, connected to their form. The clearest example of this is churches. We do not even need to go back to the Middle Ages, to the magnificent cathedrals of the Gothic era, to illustrate this point. These churches, one Baptist, one Catholic, from the beginning of the twentieth century make the point. The shape of these buildings is significant to its purpose. Spires, a traditional design element of sacred spaces, indicate that this structure serves as a bridge between what is below (on earth) and what is above (in heaven). Both buildings have prominent and impressive front doorways; entering these buildings is an occasion. The other design elements—windows, building materials, columns, etc.—are understated and orderly, not drawing attention to themselves. The buildings are symmetrical and proportional, telling us that they exist as spaces of order and harmony.

Contrast these two with this building, exemplary of contemporary church architecture. There is little here in the design to indicate the sacred purpose of the space. Minus the cross symbol, this building could easily be an office park, an apartment building, a conference center, an opera house, or an elementary school. There is no immediately identifiable front door; no symmetry; no juxtaposition of high and low, heaven and earth. Instead there is an uncoordinated mass pocked with inexplicable negative space. The message given by the form of this building is, to put it mildly, garbled.

At this point, it is tempting to respond that this is a moot point. Surely, one might say, it doesn’t really matter what these buildings look like in relation to their function; perhaps it is even a good idea to have interchangeable designs, so if the building ceases to be used for one function it is easy to appropriate it for another. It’s nice that craftsmen in the Middle Ages wanted to build cathedrals and in the seventeenth century wanted to build opera houses, but if they don’t want to build those kinds of buildings today, who cares?

The relationship between the form and the function of a building matters because it molds our understanding of our own relationship to reality, particularly what we can know. When a town or a city (like Prague, for example) consists of buildings each with a readily distinguishable function—a house does not look like a factory, and a place of work looks different from a house, and none of them looks like a church or a center for the arts—this communicates that material form matters. Such an urban landscape makes a bold epistemological claim; it assures us that material reality tells us something real and substantial about purpose and function, and that our perception of the world we encounter through our sense experience, specifically vision, is capable of communicating truth to us.

This is, of course, no longer how our cities are built. The incoherence of form and function that dominates modernist cities teaches us a dangerous lesson. When a church looks like a factory, or an opera house looks like a military bunker, our ability to rely on our sense experience to tell us about reality is undermined. In a streetscape like this one or this one, we are constantly dealing with the proposition that nothing is as it seems; what appears to be a sacred space may be a Dollar Tree, and what appears to be a shopping mall may be a church. Our experience or perception of things are totally unrelated to the truth about those things. This kind of architecture communicates that we are unable to trust our sense experience to teach us about what is real. What architect Leon Krier calls “the ontological rupture between appearance and reality,” philosopher Leszek Kolakowski calls “the metaphysical horror” of being, given our nature as sense-perceivers, cut off from reality.

Buildings and streetscapes shape how we as a society think about ourselves, subtly but surely. As with all other forms of art, it is important that we discipline ourselves to look for the narratives at work and discern whether the claims being made about reality and about ourselves as human are true or false. The easiest way to start doing this is simply to listen to our instincts; if a building feels ugly and uncomfortable, there is a reason for that. Start looking at its proportions, the way the negative space (windows and doors) interacts with its mass (solid walls), the relationship between its function and its form.

Only by understanding how our buildings shape us can we return to the beginning of the cycle and start to shape buildings that present something more than a bleak, nihilistic story of what it means to be human.

This article has been republished with permission from the Intercollegiate Review.