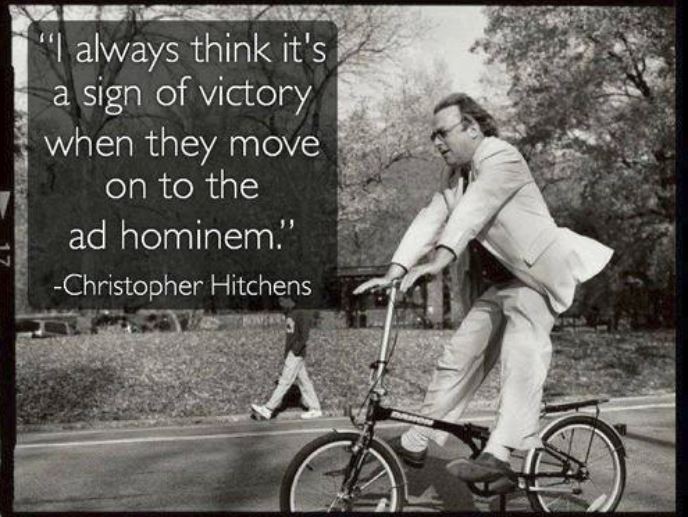 At Intellectual Takeout we write a great deal on logical fallacies, of which there are many.

Of all fallacies, the ad hominem is king (and probably always will be). From the Latin “to the man” or “to the person,” it is a (fallacious) argumentative device that involves attacking one’s opponent instead of rebutting their argument.

Though timelessly popular, the ad hominem has found particular prominence in the current age, which combines plummeting intelligence with instantaneous, character-limited communication. (A toxic mixture, indeed.)

Despite the proliferation of the ad hominem, there are serious reasons it should be avoided. Here are five of them.

1. It Makes You Look Stupid

There’s no doubt that some ad hominem attacks can be clever. But to be viewed as a person of intelligence, one must learn to counter and debunk arguments, not simply deride or smear people.

People often forget that individual behavior shapes culture. Our choices matter. Calling someone a tree hugger, sexist, Nazi, or SJW might offer a positive sensation. It might even be true. But using such rhetoric has a corrosive effect on society, says Glenn Geher, Ph.D.

“Avoiding ad hominem attacks is, in fact, a foundational element of civil discourse,” writes Geher, professor of psychology at the State University of New York at New Paltz. “[As] hard as it may seem, most people, regardless of where they stand politically, share the same goals of making this world a better place. In a climate beleaguered with disagreement, let’s remember that all discourse should be respectful and civil. Avoiding the ad hominem attack is a basic aspect of best practices in political discourse.”

By their very nature, ad hominem cut individuals down. We all get angry, and in these moments it’s natural to want to lash out.

When we do, it often feels good, at least temporarily. I showed her! We often forget that our words can cut, sometimes deeply. When you attack someone’s makeup, weight, looks or any number of personal traits in response to an argument they present, you don’t just look dumb. You look like petty and mean. This is true regardless of how many retweets and likes your comment receives.

4. It Ends Fruitful Discussion of Ideas

I take ideas and the search for truth seriously. One of the best ways to sharpen the mind and get closer to truth is to challenge one’s own ideas. This often involves dialogue with other people. Because people rarely see eye to eye on all matters, it’s not unusual for debate and disagreements to occur. This is entirely proper. The fruitfulness of discussion depends largely on how well people are able to listen to one another and respectfully exchange ideas. Once a discussion grows heated, it makes a fruitful exchange of ideas more difficult. When the ad hominem appears, it’s generally a sign that a healthy exchange of ideas is no longer possible. That’s usually when I make my exit. There’s little to be gained by engaging in such a discussion. If one’s goal is to “win” a debate by being the last man on the field, the ad hominem works fine. (Though Christopher Hitchens was probably correct to view it as “a sign of victory” whenever his opponents moved on to ad hominem.)

If one is genuinely interested in dialogue and healthy discourse, avoid the ad hominem.

5. It Can Get You in Big Trouble

As a personal rule, I work hard to avoid ad hominem arguments for the reasons stated above. But I also discerned long ago the prudence of avoiding them for another reason: they can get you in hot water. This is especially true in the age of the internet, when today’s harmless (if rude) slang can become tomorrow’s hate speech. The “rules” that determine which words are acceptable and which are not—not to mention who can say them—are elastic, to say the least. Some might say they’re even irrational.

Increasingly we see celebrities, pundits, and athletes under fire for decade-old tweets and blog posts that for years had flown under the radar. Sometimes high-profile figures get fired for a careless tweet. Sometimes they get sent to sensitivity training. Sometimes they miraculously emerge unharmed.

The truth is, no one is quite sure what the rules are today, let alone what they’ll be 20 years from now. But a prudent policy, if you wish to avoid the fate of Rosanne or James Gunn, is to avoid using ad hominem arguments altogether. Learn to tailor your arguments against the ideas people espouse, not the people themselves. It will sharpen your mind, improve your arguments, and create a healthier atmosphere of ideas. In the long run, it just might make you a better person, too.