The Minnesota First at the Battle of Gettysburg: Putting Lincoln’s Words into Perspective 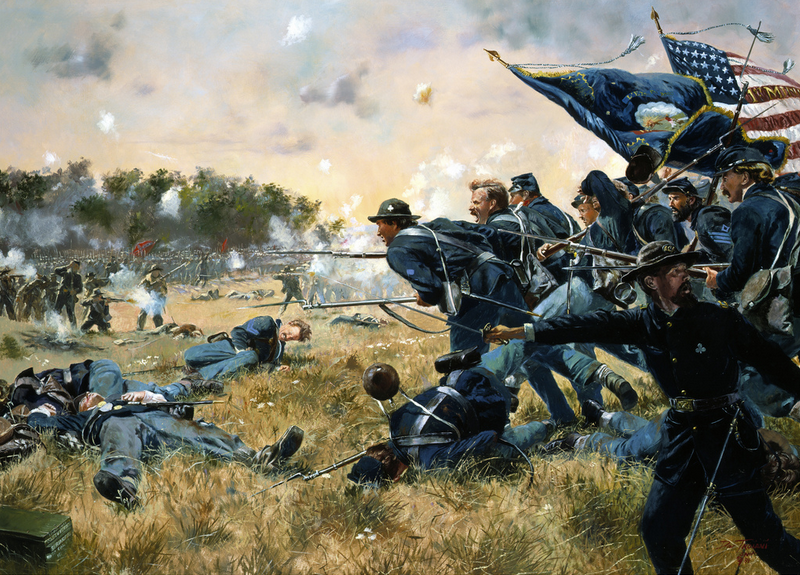 On July 3rd, 1863, Union troops won the Battle of Gettysburg. Considered to be a turning point of the war, Gettysburg was the deadliest Civil War battle, not only in terms of civilian soldiers, but Generals as well. The three days of fighting were filled with devastation, tragedy, courage, and heroism. There were many points during the battle that could have changed the outcome of the entire Civil War. One such moment was the charge of the First Minnesota Volunteer Infantry during the second day of fighting.

Late in the day, General Hancock surveyed the Union line. They had withstood assaults to both the left and right flank, refortifying in response to the Confederate Army’s movements, but the center line was thin and Confederate forces had begun advancing up the hill toward them.

“What unit is this?” General Hancock asked.

“Charge that line!” came the order, and without hesitating, Colvill repeated the words to his men and led the charge.

“Every man realized in an instant what that order meant, death or wounds to us all; the sacrifice of the regiment to gain a few minutes time and save the position, and probably the battlefield, and every man saw and accepted the necessity for the sacrifice,” wrote one of Colvill’s men. With only two-hundred-fifty-two men against roughly 1,600, Colvill’s forces were greatly outnumbered and had almost zero chance of survival. They were also the Union’s only chance of keeping the line from splitting in two. Buying Hancock an extra ten minutes, their charge gave the rest of the Union soldiers the time they needed to ready for attack. As a result, the unit suffered 215 casualties, over eighty percent of the men who charged the Confederate line.

What could possibly have motivated such a sacrifice?

The Minnesota First was extremely loyal to their commander and were familiar with the cost of not following orders. The center of the Union’s fishhook formation was weak because one of the commanders earlier in the battle had taken matters into his own hands and pressed his troops forward, away from the line. As a result, the entire army was at risk. The cost of another mistake like that would have been too high, and everyone knew it.

Minnesota sent a larger percentage of their eligible men than any other state in the Union. I think this was partially due to the fact that they had very recently gained statehood when the war broke out. Minnesota Governor Alexander Ramsey was in Washington D.C. when Fort Sumter fell and immediately offered soldiers from Minnesota, jumping at the opportunity to establish Minnesota’s place among the other states in the Union.

Warfare is an ugly, brutal thing, and the men who fought in the American Civil War were deeply aware of that. This was a war fought on their home soil, and against their own countrymen. The sacrifices made by the men who fought at Gettysburg are part of the reason that the United States emerged from the Civil War as one nation, instead of two. Knowing their stories puts Lincoln’s words into perspective:

“But, in a larger sense, we cannot dedicate—we cannot consecrate—we cannot hallow—this ground. The brave men, living and dead, who struggled here, have consecrated it, far above our poor power to add or detract. The world will little note, nor long remember what we say here, but it can never forget what they did here. It is for us the living, rather, to be dedicated here to the unfinished work which they who fought here have thus far so nobly advanced.”