Trump Follows the Advice of John Quincy Adams. But Will Kim Jong-un Reform? 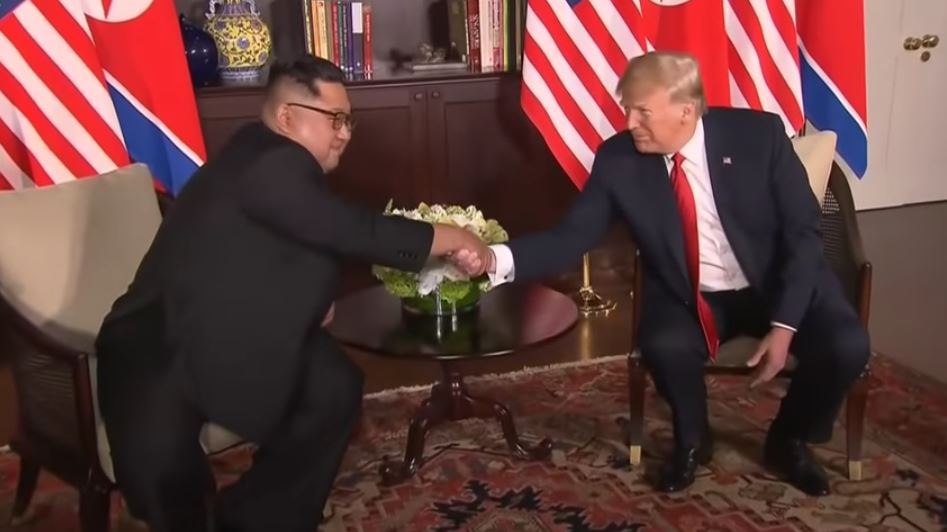 Only the most unhinged Trump haters would not be overjoyed at the prospect of peace with North Korea. “The past doesn’t have to be the future” was the message conveyed in the video Trump shared with Kim Jong-un during their summit

Only those ignorant of the suffering of the North Korean people would not have their hearts lifted at the prospect of legitimate commerce replacing the country’s flatlined Marxist economy and black market dealings. Trump offered a future where North Korea can “shake the hand of peace and enjoy prosperity” with the prospect of condos and hotels on beaches in a developing North Korea.

The script of the video, probably unknowingly, echoed former president John Quincy Adams by offering, “A new world can begin today, one of friendship, respect and goodwill. Be part of that world, where the doors of opportunity are ready to be opened.”

On the 4th of July, in 1821, then Secretary of State John Quincy Adams delivered an address on foreign policy. In that address, he advised America to not go abroad “in search of monsters to destroy” but instead to offer the hand “of honest friendship, of equal freedom, of generous reciprocity.

To the question “What has America done for the benefit of mankind?” Adams had this answer:

“Let our answer be this–America, with the same voice which spoke herself into existence as a nation, proclaimed to mankind the inextinguishable rights of human nature, and the only lawful foundations of government. America, in the assembly of nations, since her admission among them, has invariably, though often fruitlessly, held forth to them the hand of honest friendship, of equal freedom, of generous reciprocity. She has uniformly spoken among them, though often to heedless and often to disdainful ears, the language of equal liberty, equal justice, and equal rights.”

Trump offered security guarantees to North Korea and eliminated expensive military exercises with South Korea, saying “We’re flying planes in from Guam, we’re bombing empty mountains for practice. I want to stop that and I will stop that, and I think it’s very provocative.”

Adams advised that America’s glory should not be found in dominion over others:

“[America] is the well-wisher to the freedom and independence of all. She is the champion and vindicator only of her own…

Her glory is not dominion, but liberty. Her march is the march of mind. She has a spear and a shield; but the motto upon her shield is Freedom, Independence, Peace. This has been her declaration: this has been, as far as her necessary intercourse with the rest of mankind would permit, her practice.”

Yet, only the naive would not be skeptical of smiling promises made by Kim Jong-un, known to be a deceitful tyrant and human rights abuser. At the summit Kim offered, “The past worked as fetters on our limbs, and the old prejudices and practices worked as obstacles on our way forward.”

There are many “fetters” on Kim’s limbs.

What can Kim do as the head of failed Marxist economy that produces few legal products and services? Further, given an enormous personal appetite for luxury goods paid for from the government budget, what can Kim do? Two choices are available: Reform the economy and risk being overthrown, or continue to engage in organized crime and blackmail.

Kim Jong-il, father of Kim Jong-un, chose organized crime and blackmail. The blackmail took the form of deceitful promises to reduce his weapons program in exchange for foreign aid. Until this summit, there was no indication that Kim Jong- un, the current Marxist monarch of the Kim dynasty, had not embraced the role of crime boss.

In their book North Korean Confidential, Daniel Tudor and James Pearson report on organized crime run out of the nefarious Office 39. Large-scale drug smuggling of crystal meth is run out of Office 39. Tudor and Pearson write, “The money earned by Office 39 supported not only the Kim family’s lavish lifestyle, but also the purchase of gifts (cars, yachts, houses, gold watches, and so on) to keep underlings loyal.”

Crystal meth, known as bingdu, is ubiquitous in North Korea. The drug takes away the pangs of hunger. Tudor and Pearson write “many people with chronic diseases who lack the money to pay for proper treatment turn to it for temporary pain relief.”

Since their diplomatic bags cannot be searched, ruthless smugglers of meth, opioids, and counterfeit pharmaceuticals were appointed as North Korean diplomats. These “diplomats” routinely carried back to North Korea millions of dollars in cash. They forged partnerships with other crime organizations such as the Japanese Yakuza. Estimates are they gained almost $2.5 billion a year making crime among the largest industries in North Korea. Office 39 was so successful at counterfeiting U.S. currency, that the U.S. Treasury was forced to change the design of U.S. paper money.

Office 39 diversified into cybercrime including ransomware where North Korean cybercriminals hijack computers and demand a ransom. In 2016, North Korean Office 39 hackers “almost stole $1.2 billion from the New York Federal Reserve, but only a spelling error stopped them.”

While the North Korean parents watched their children starve, the Kims built more palaces and imported an endless parade of luxury foods.

As with any crime family, there have been murders of those who knew too much or whose loyalty seemed questionable. According to Tudor and Pearson, Kim Jong-nam, half-brother of Kim Jong-un, “spent much of his life in reluctant exile, working as the North Korean leadership’s man on the outside, facilitating the procurement of these sought-after luxury goods and the export of North Korean arms.”

Probably, Kim Jong-nam was assassinated so he would not be a rival for the North Korean throne.

Then, there was the murder of Kim Jong un’s uncle, Jang Song-thaek. Jang, according to Tudor and Pearson, was “the real brains” behind the development of Office 39. Officials watched as Jang was set upon and killed by a pack of 120 starving dogs.

No matter how conciliatory President Trump is, for peace to occur, Kim Jong-un is going to have to decide to retire from organized crime and allow North Korea to prosper by becoming a nation producing and trading legal goods and services.

Trump opened the path to legal trade by offering to end economic sanctions as further progress toward peace is made. For some, Trump’s approach may seem counterintuitive; but the end of economic sanctions on North Korea will be an important step forward. The North Korean economy will improve with more legal trade and more contact with the outside world. At the same time, as more information flows, the North Korean people will realize that they have been taught lies. What will follow as they come to understand they have been living in a Marxist house of horrors, rather than the greatest country on earth?

After the Revolutionary War, Martha Washington wrote: “The difficulties, and distresses to which we have been exposed during the war must now be forgotten. We must endeavor to let our ways be the ways of pleasantness, and all our paths Peace.”

There is a terrible history on the Korean peninsula. Let us hope for the sake of all of humanity that the “distresses” of the past can be risen above.