How Did America Become a Nation of Slobs? 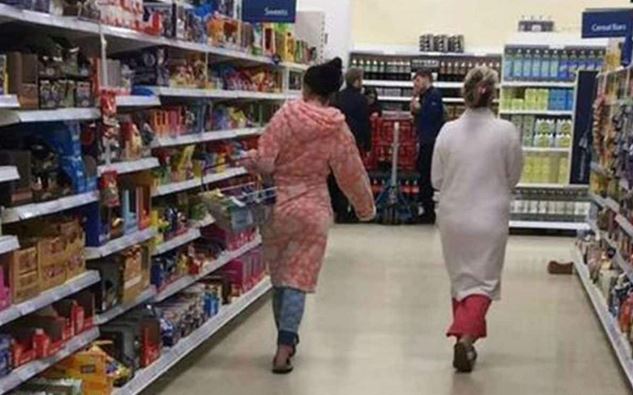 One evening in early April I was waiting for my ten-year-old twin granddaughters to finish their indoor soccer practice when a girl their age approached me and said, “Your coat looks really nice.”

It was a wet, chilly evening, and I was wearing a London Fog given me thirty years ago by an elderly widow whose deceased husband no longer had to fret about the rain or the cold.

Though I thanked the girl, her comment took me aback. Then I looked at the other adults milling around me, and thought, as I often think nowadays, that all of them were dressed like…well, like slobs. Several were wearing sweat pants and hoodies, others ragged trousers and rumpled sweaters. One woman, a thirty-something mom, wore designer jeans torn artfully at the knees.

Several people have from time to time complimented me on my attire. One man, age fifty or so, once told me I dressed like an adult, a remark that struck me then and strikes me now as ludicrous. I typically wear a pair of khaki pants, casual shoes, and a shirt with a button-down collar. To be complimented on such mundane clothing is not only silly, it also reveals how low our standards have fallen.

Go to any public arena—a sports event, a shopping mall, Wal-Mart, you name it—and you realize the standard of dress for men and women, adults and children, has reached a low point in American history. Blue jeans are de rigueur; t-shirts with slogans, some of them billboards of obscenity, assault the eyes; pajama bottoms are worn to the grocery store; restaurant patrons appear at lunch looking as if they had just rolled out of the sack; grown men wear baseball caps while eating steaks at Outback.

Let’s contrast our contemporary “style” with the recent past. Go online, Google “baseball games 1930s photos,” and look at the pictures of the fans. Most are males wearing ties and coats. The women are wearing dresses and hats. Take a look at television shows from the 1950s or at “Mad Men,” and note how stylish people dressed when in public.

When I was a boy, I remember my mother once telling me she couldn’t go to the store until she took the curlers from her hair. “Why?” I asked.

“Good heavens,” she said, “no one in town goes shopping with their hair in curlers.”

Those days are long gone, Mom.

Of course, lots of folks still spiff up for work. The tellers in my bank always look professional, some attorneys I know hit the office in a coat and tie, and the male teachers in my grandson’s school wear ties in the classroom. Yesterday I saw a woman, mid-twenties, walking down the street in a lovely black dress. Though her looks were not remarkable, she was striking because of the dress. She is also the exception rather than the rule. A good number of people I see during the day, of all backgrounds, run the gamut in attire from hooker to beggar.

What does our own sloppy dress tell us about ourselves? Are we too pressed for time to dress a little up rather than way down? Are we rebelling against the idea of beauty and culture? Or are we just too lazy to pull on a pair of slacks instead of wearing the sweats we slept in?

I have no idea.

Recently I was watching Casablanca with two of my granddaughters. One of them suddenly turned to me and said, “Why was everyone so dressed up back then?”

“People used to dress that way. They did every day. We just don’t do it anymore.”

“You do,” my granddaughter said.

I burst out laughing. My granddaughter gave me a puzzled look, then returned to the movie.

Oscar Wilde once said, “You can never be overdressed or overeducated.” No one would ever consider me overdressed—or overeducated, for that matter—but if I am now regarded as well-dressed, a man representing haute couture, then I can draw only one conclusion.

We are a nation of slobs.