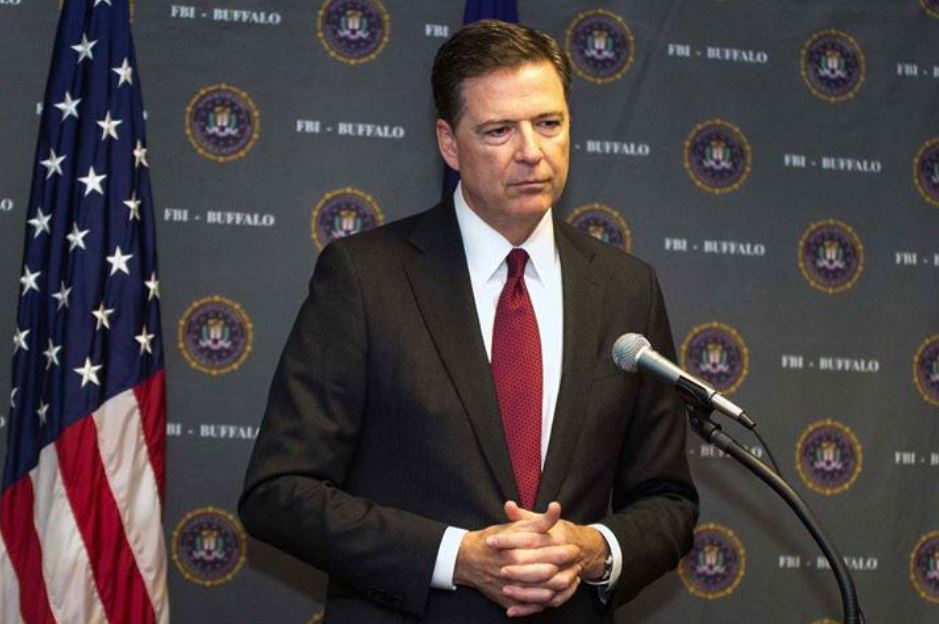 During his recent book tour, ex-FBI Director James Comey made it clear that he detests Donald Trump.

Comey mocked Trump’s appearance—commenting on his “orange skin” and the bags under his eyes—and compared the president to a mob boss. He said Trump is unfit to be president, and even questioned his marriage. On Twitter, Comey taunts the president with self-aggrandizing tweets and suggests Trump’s day of reckoning will soon arrive. During an interview last spring, Comey’s wife admitted she and her daughters voted for Hillary Clinton and attended the Women’s March to protest Trump’s presidency the day after the inauguration.

But as the old saying goes, a fish rots from its head, and that certainly is the case with Comey’s FBI. (Trump fired Comey in May 2017.) Several passages in the Justice Department’s Inspector General report on the agency’s handling of the Clinton email investigation illustrate the FBI’s culture of contempt for Trump, before and after the election.

Comments from key law enforcement officials—lawyers and investigators—about Trump were vile, demeaning, and childish. But their ridicule was not isolated to Trump. These public servants were unsparing in their contempt for the voters—the very people who fund their salaries and pensions.

The Case of Strzok and Page
Let’s start with Peter Strzok and Lisa Page, the FBI lovers who are connected to the Clinton email probe, the counterintelligence investigation into the Trump campaign, and Special Counsel Robert Mueller’s team. We know from previously-reported text exchanges that Strzok and Page harbored a deep disdain for Trump and a political preference for Clinton. The IG report confirms their bias after reviewing more than 40,000 messages between the two:

While Strzok was working as the lead investigator on the Clinton email probe, he and Lisa Page, then an FBI attorney, exchanged dozens of messages that were critical of the presumptive Republican presidential nominee. Strzok called Trump “an idiot” on several occasions in the spring of 2016, and Page concurred: “He’s awful. This man cannot be president.” After he won the nomination, their scorn intensified. Page called Trump a “d*****” and Strzok called him a “disaster” and a “f****** idiot.” They both worried he might win. In referencing a news article the day before the election, Strzok sent a panicked message to Page: “OMG THIS IS F****** TERRIFYING.”

(When questioned by the IG’s office about the tone of the texts, Strzok insisted they were merely “personal opinion talking to a friend and that “the political opinions he expressed in the text messages never transited into the official realm.”)

But that’s a bit hard to believe since Strzok started conspiring in the summer of 2016 about how to respond if Trump won. When asked by his inamorata to assure her Trump would not be the next president, Strzok replied: “No. No he’s not. We’ll stop it.”

And while considering whether to join Mueller’s team in May 2017, Strzok fantasized about his role in an “investigation leading to impeachment.” When Page told Strzok in March 2017 that she had just finished reading All the President’s Men, Bob Woodward and Carl Bernstein’s account of the Watergate scandal, she noted how the president resigned at the end. Strzok replied, “What?!?! G**, that we should be so lucky.”

The lovers also criticized Republicans, conservatives, and Trump voters. In early 2016, they complained about the annual March for Life. Page told Strzok, “I truly hate these people. No support for the woman who actually has to spend the rest of her life rearing this child, but we care about ‘life.’ Assholes.” (Strzok then joked about canceling the permit for the event.) During the primaries, Strzok remarked, “the Republican party is in utter shambles. When was the last competitive ticket they offered?” Then in August 2016, Strzok texted Page, “Just went to a southern Virginia Walmart. I could SMELL the Trump support . . . .”

Tax-Funded Contempt
Buried toward the end of the report are shocking comments from three unnamed FBI officials. The inspector general slams the three—as well as Strzok and Page—for “conduct [that] has brought discredit to themselves, sowed doubt about the FBI’s handling of the Midyear investigation, and impacted the reputation of the FBI.” Two FBI agents repeatedly referred to Trump as “drumpf.” In an exchange in September 2016, one agent joked about not wanting to spend time with his colleagues: “i (sic) would rather have brunch with trump and a bunch of his supporters like the ones from ohio that are retarded.”

The day after the election, one FBI official lamented, “Trump’s supporters are all poor to middle class, uneducated, lazy POS that think he will magically grant them jobs for doing nothing. They probably didn’t watch the debates, aren’t fully educated on his policies, and are stupidly wrapped up in his unmerited enthusiasm.”

An FBI attorney responded: “I’m just devastated. I can’t wait until I can leave today and just shut off the world for the next four days.”

Then this gem: “I honestly feel like there is going to be a lot more gun issues, too, the crazies won finally. This is the tea party on steroids. And the GOP is going to be lost, they have to deal with an incumbent in 4 years. We have to fight this again. Also Pence is stupid.”

Keep in mind, these are the idiots sending messages like this on government devices.

All of the FBI officials cited in the report claimed their personal and political views did not impact their professional work. Incredibly, Inspector General Michael Horowitz seemed to agree. His report concludes that his team “did not find evidence to connect the political views expressed in these messages to the specific investigative decisions that we reviewed.”

But Americans know better. The public and private comments by top law enforcement and intelligence officials in the Obama Justice Department demonstrate a level of contempt for Trump that resulted in a bogus counterintelligence operation into his presidential campaign; the leaking of classified information to hurt Trump associates; and a special counsel investigation that has roiled the presidency and divided the country.

And now we know they hate us, too.