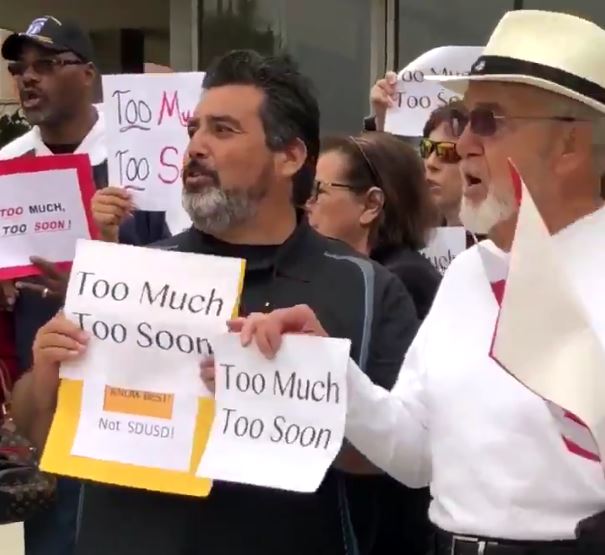 San Diego parents pulled their kids from school and rallied outside the district’s headquarters Tuesday, expressing anger and frustration over a sex-ed curriculum they allege is completely inappropriate for their young children.

The sixth grade curriculum includes lessons on gender identity, birth control, the stages of sex, STDs, HIV, and pregnancy. Parents are calling the material “too much, too soon” and age-inappropriate while San Diego officials defend the curriculum by arguing that the Centers for Disease Control and Prevention supports the lesson plans, CBS News 8 reported.

“We’re going to ask them to suspend this new curriculum because it’s not a curriculum for the adolescent brain, it’s an adult curriculum,” mom Angela Beaver told CBS 8 News.

“This is absolutely appropriate for our students,” said Isabella McNeil from the San Diego Unified School District, maintaining that the parents are getting upset over material that should in fact be taught to young students.

San Diego parents can opt their child out of the sex-ed curriculum if they choose, but no substitute curriculum will be provided.

Fort Worth schools have also been reeling after a sex-ed lesson for sixth-graders entailed gender transitions and sexual fluidity, according to the Star-Telegram.

Sex-ed programs in other states have also been causing chaos. A California school district told parents in February they can’t opt their kids out of a new sex education course covering abortion, homosexuality, and transgender issues. Despite California’s 2015 Healthy Youth Act, which lets parents opt their children out of sex-ed classes, the Orange County Board of Education decided parents don’t have that right.

Delaware is considering adopting a policy allowing young school students to choose whatever name, gender, or race they want under a veil of school protection mandating the parents not be informed of these decisions unless the student explicitly wishes the parent be included.

Content created by The Daily Caller News Foundation is available without charge to any eligible news publisher that can provide a large audience. For licensing opportunities for this original content, email [email protected].