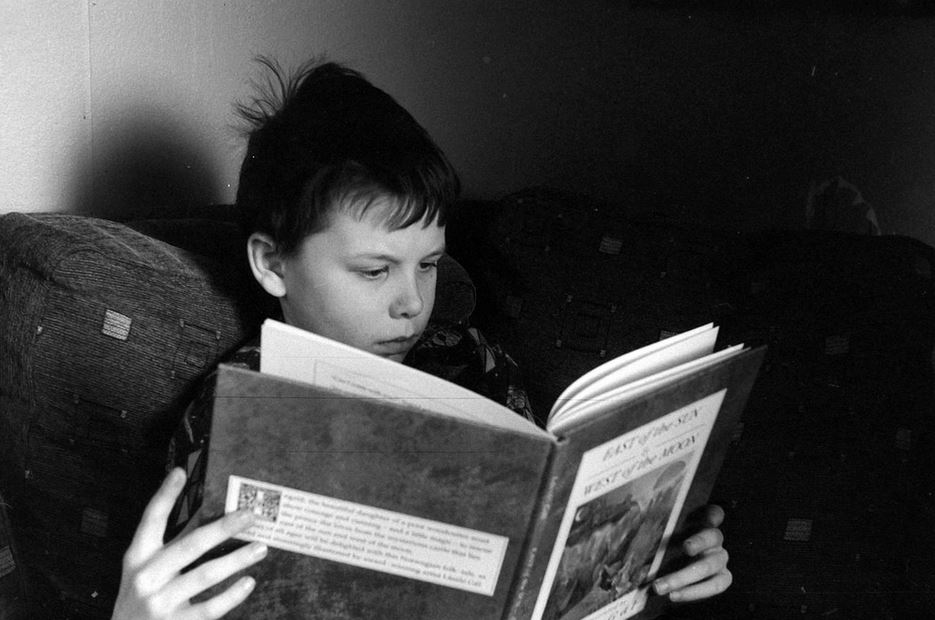 A young lady I know won a Kindle in an academic contest. She is a voracious reader. In eighth grade, she enjoys Austen, Chesterton, Lewis, and Wodehouse, among many others. A trail of books seems to follow her everywhere she goes.

Her parents, wary of potential negative effects of screens on growing minds, would have preferred that their daughter not own a Kindle, at least not for a few more years. Since it was a prize well earned, however, they acquiesced.

The young lady continued to read paper books, but the Kindle came in handy for outings (no more scrambling to find enough books to bring along) and reading in bed (no book lamp needed). Not wanting to spend money, she searched for books in the public domain, and was delighted to discover that the Kindle gave her access to some old books by her favorite authors—books that local libraries no longer carried on their shelves.

She also said the device was improving her vocabulary because when she encountered new words, she could simply click on them for the definition.

All in all, it seemed like a wholesome approach to integrating technology, and so her parents were surprised when, several months later, their daughter announced that she wanted to sell her Kindle.

“For the first time in my life,” she explained, “I’ve noticed that I’ve had to read lines two or three times in order to understand them, because I’m distracted. There are so many things I can do with the Kindle. I can make the font bigger, or change the contrast, or highlight and save a passage. There are so many choices, so many things to fiddle with, that I lose track of the story. It’s becoming a habit that is carrying over into my real books, too.”

Nineteenth-century British educator Charlotte Mason described the ability to focus (in a healthy brain) as a habit of the mind—one that can be gained or lost according to how the mind is trained. For this eighth grader, reading on a Kindle was undoing her habit of concentration. Her mind was losing the ability to be fully present to her books, and she did not like how it felt.

Will this dilemma befall every child who uses a Kindle? I don’t know. Certainly, the Kindle has advantages over other types of even more fragmented and distracting technological devices. “It’s just a Kindle,” one might say—and yes, I agree that there are far worse threats to a child’s mind. Yet, if “just a Kindle” can have a detrimental effect on a bright young reader, it’s worth measuring its drawbacks before deciding whether the device should replace real books in a child’s life.

A few months ago, I suddenly had a memory of a character from a book I had read many times when I was a girl, though I had forgotten all about it as an adult. As I tried to remember more about it, bits and pieces of the story came back to me. I was overcome with the desire to read the book again, to find it as I might want to find an old friend I hadn’t seen in decades.

I ordered a used copy, and within a week held it in my hands once again. The details came rushing back as I looked at the cover and flipped through the pages, remembering how I would read the book in my bedroom in the house where I grew up. It truly felt like I was reunited with an old, dear friend—reunited with the book, and reunited with my childhood, too.

I wonder: If I had first read this book on a screen, would I have felt the same physical connection to my youth as I held it in my hands decades later?

No doubt, a computer might contain a story worth reading. When a father or mother or beloved teacher reads that story aloud to a child, it can forge memories for a lifetime. In our house, we use computers to listen to audio books by authors like Hans Christian Anderson and Thornton W. Burgess, and everyone enjoys it.

Still, it isn’t the same. Listening to the book on the laptop can be nice, but it doesn’t hold a candle to the bond that is built when my husband or I cuddle up with the children and turn the worn pages of our favorite books as we read aloud together.

Isn’t there something precious about the book itself? Isn’t there something in its weight, in its feel, in its illustrations, in its pages, that, when a grown-up child holds it in his hands and reads it to his own children, will awaken a reverence for the story that a computer screen would not?

With a background in reading education, I am often on the lookout for new tools of the trade. Lately, I have been exploring computer programs designed to teach reading skills. Many have an impressive array of target goals and assessment tools, and catchy graphics to boot.

Beneath the computer-generated rewards for correctly answering prompts, though, something is missing. Stories are contrived to teach phonemic awareness, not to reach young hearts. Sentences are created to impart skills, not to touch souls. There is no author here, no person telling the reader about something that really matters. And so, there is no compelling reason for a child to read, except to win computer games.

Without real books, without authentic stories, without meaningful communication between an author and a child, the world of video-game inspired reading programs feels empty. Empty of meaning, empty of personality, empty of the ability to make memories for life.

The intention of these games is to teach reading skills in a fun way, and that is a commendable goal. Card games and board games like Quiddler, Zingo, and Bananagrams are great ways to help children read and spell. Video games, however, run the risk of damaging a child’s attention span, which, in turn, will damage his ability to read.

“Your child should play this game as often as possible,” one site advises. Regardless of what he is learning, should any child spend every possible minute staring at a screen? An overdose of screen time that endangers the child’s overall ability to focus is a high price to pay for practicing a phonics trick.

Used wisely, certain technological tools might benefit some struggling readers, and parents have every right to discern their use according to each child’s particular needs. Yet, in fostering a lifelong love of reading, technology cannot begin to compete with real, whole books.

If we want to raise children who can hold a conversation, they need actual people with whom to converse. Likewise, if we want to raise readers, they need, more than anything else, real and worthy books to read. Books that will capture their imaginations and their hearts; books they will feel and see and store away and take out again and hold and remember as part of the story of their lives.

It is never too late to help children find a world of wonder in bound covers, pages that rustle, and words that matter. Real books are endlessly patient. They wait peacefully, and stay just the same, no matter how long it takes to discover them again.