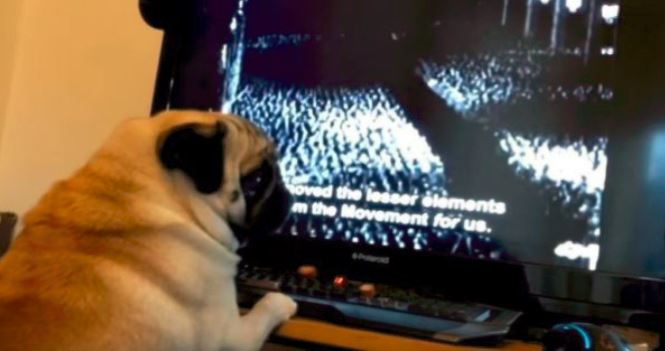 In 2017, a 28-year-old Scottish man named Mark Meechan was arrested on suspicion of “posting offensive material online.” The arrest stemmed from a video Meechan created and shared, which showed his girlfriend’s pug doing a Nazi salute whenever it heard words “Sieg Heil” or “gas the Jews.”

The video, which was viewed by more than 3 million people before YouTube pulled it, has received extensive media coverage. Many people, unsurprisingly, were offended by the clip, including Jewish organizations.

In the wake of the backlash, Meechan apologized for the video, which he said was intended as a joke to annoy his girlfriend. But he’s learning his video is no laughing matter.

On Tuesday, Meechan was found guilty of committing a hate crime. He is scheduled to be sentenced on April 23 and faces up to a year in prison. Meechan, who goes by the name @CountDankula on Twitter, said the court also assigned him a social worker who will determine whether or not he will be placed under house arrest and required to wear a GPS tracking device.

Apparently, @CountDankulaTV has been convicted and found guilty under the communications act of being “grossly offensive”. A man is actually facing prison for making a joke.

Gervais is correct. But evidence suggests that free speech no longer enjoys the cherished status it once did—in Europe or America. A new Gallup poll shows just one-third of U.S. students believe “hate speech” should be protected by the Constitution. It apparently has not occurred to these students that one can marginalize and suppress dissenting views simply by labeling them “hate speech.” Or perhaps that is the very point.

Whatever the case, one need only look around to see that free speech and free expression are hardly sacrosanct in modern America. The difference is this: In America, we tend to organize boycotts or demand someone be fired over offensive speech; in Europe, governments can actually arrest, charge, and place offenders behind bars.

That is a big difference. But it has more to do with a few words the Founding Fathers wrote into the U.S. Constitution than American love of free speech.

It’s worth noting that support for free speech is waning during a period when mass media is exposing individuals to an increasingly diverse set of values, opinions, attitudes, and beliefs. To remain a civil and open society, one would assume this would require us to become more tolerant of speech we disagree with, not less. But the opposite is happening. Why?

“We are miseducating a whole generation of future leaders on our college campuses today. We are teaching them intolerance, we’re encouraging shutting down dissenting views,” Dershowitz, a constitutional law professor, said during a recent roundtable discussion. “I am terrified about [what happens] twenty or thirty years from now, when these young people who have been taught not to tolerate diverse views become our leaders.”

There is no magical line between hate speech and free speech. That’s why those who support free speech should speak out against the prosecution of Mark Meechan — even if especially if you don’t approve of his dog tricks.