“There are times in our society when we have to act in faith on behalf of the greater good. And, unfortunately, this is one of them.”

These lines come from a recent episode of ABC’s dramatic series called Designated Survivor (starring Kiefer Sutherland). They could easily have been spoken by the hero I choose to write about here, Kornél Hummel (1907-1945) of my native Hungary.

Hummel lived during one of the most crucial times in the history of the 20th Century, the 1940s. The last year of World War II witnessed the most brutal acts of war in my country, as noted by Máté Hajba in his essay in this series on Bishop Vilmos Apor. More than half a million Jews were herded on to cattle wagons and shipped to the concentration camps where very few survived. Besides the Germans, the brutality of the “liberating” Soviet troops posed a great challenge to Hungarians, too. Fortunately, the period also produced some true heroes like Hummel.

He was only 37 years old when the front lines of battle passed through the Hungarian capital of Budapest. Hummel was a priest, a teacher of religion, and the protector of a community of blind people. He had already saved hundreds when the siege of Budapest started in 1944.

He oversaw a community of 120 people in a building complex known as the Institute for the Blind, but they had no chance to leave the compound when the Soviets arrived — not because they didn’t want to, but because their blindness prevented them from going anywhere. Since Hummel had been serving them as their priest, he personally moved into the building when all the workers there had fled and deserted the 120 blind residents.

Hummel knew that his decision to stay and protect his flock might have a fatal ending. But he was a man of faith, courage, and duty. Twenty years earlier, while preparing to be a Catholic priest, he had a dream one night that he would be shot to death by a soldier. He told his students he believed it may have been a sign that he would someday be a martyr to the faith, and that he would willingly accept it if it proved to be the case.

Once shy and reserved from behind the pulpit, Hummel’s fortitude and resolve came bursting forth when a real need surfaced. He decided everything related to the operations of the Institute — what care and treatments were necessary, how food was to be provided, and what measures needed to be taken to protect those who were stranded there with him.

Thanks to him, there was no major damage in the crowded building during the Soviet siege, but his own quarters were damaged by a bomb, and all his personal belongings were consumed by the flames. He lost his diary to the fire, a treasured possession that he had kept since he was a young student. He was wearing half-burnt pants when he went to ask his friends for a new change of clothes. He shrugged off his loss, saying that God was good to have spared him and would pay it back a thousand times.

Then Came the Soviets

With the Nazis gone, the first Soviet soldiers entered the building on January 10, 1945. Surprisingly, most of them were rather humane, at first, rather than aggressive. When they realized that the people in the building were blind, they even brought some bread and pickles to them.

From time to time, however, some drunk soldiers wandered into the premises and started to take their chances with some of the young girls. Some soldiers did not believe that the girls, who were quite self-confidently moving around in the building, could not see. One aggressive soldier only believed his victim when a pretty one whom he had wanted to rape showed him her artificial eye.

On the day that he met his fate, Hummel spent the whole day driving many of the sick and wounded of the city to a hospital. Then he went back into the Institute building in the evening to hear confessions. As he was listening to the last confession for the day, he was informed by a frantic caretaker that a Soviet soldier was harassing a young, blind girl in the courtyard. Hummel raced to the scene, where he saw the girl lying on the ground and about to be raped.

The priest somehow managed to separate the two and stood between the girl and the assailant. The soldier brandished his weapon and shouted something in Russian. Hummel gestured that he didn’t understand a word. The soldier stepped back and it seemed at first that he was going to leave. But suddenly he drew his gun, aimed, and shot Hummel in the chest at point-blank range. The priest arched back, fell, and twice uttered, “Deo gratias” in Latin, which means, “Thanks be to God.” He tried to say it again for the third time, but only his lips were moving. He couldn’t make another sound.

From that moment and ever since, Kornél Hummel was a martyr, as his dream had foretold. But to those of us who cherish his memory, he did not die in vain. His courage and his essential decency show us that one’s choices in trying circumstances can be an inspiration that touches many hearts. He was a hero who knew the risks in front of him. He chose to accept those risks and help those entrusted to his care. He didn’t run from danger to save himself. He did what he could for the lives and liberties of others, which is perhaps the greatest service any human can provide to another. 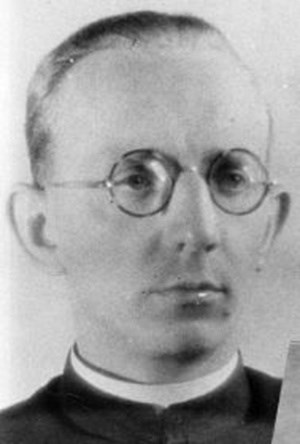