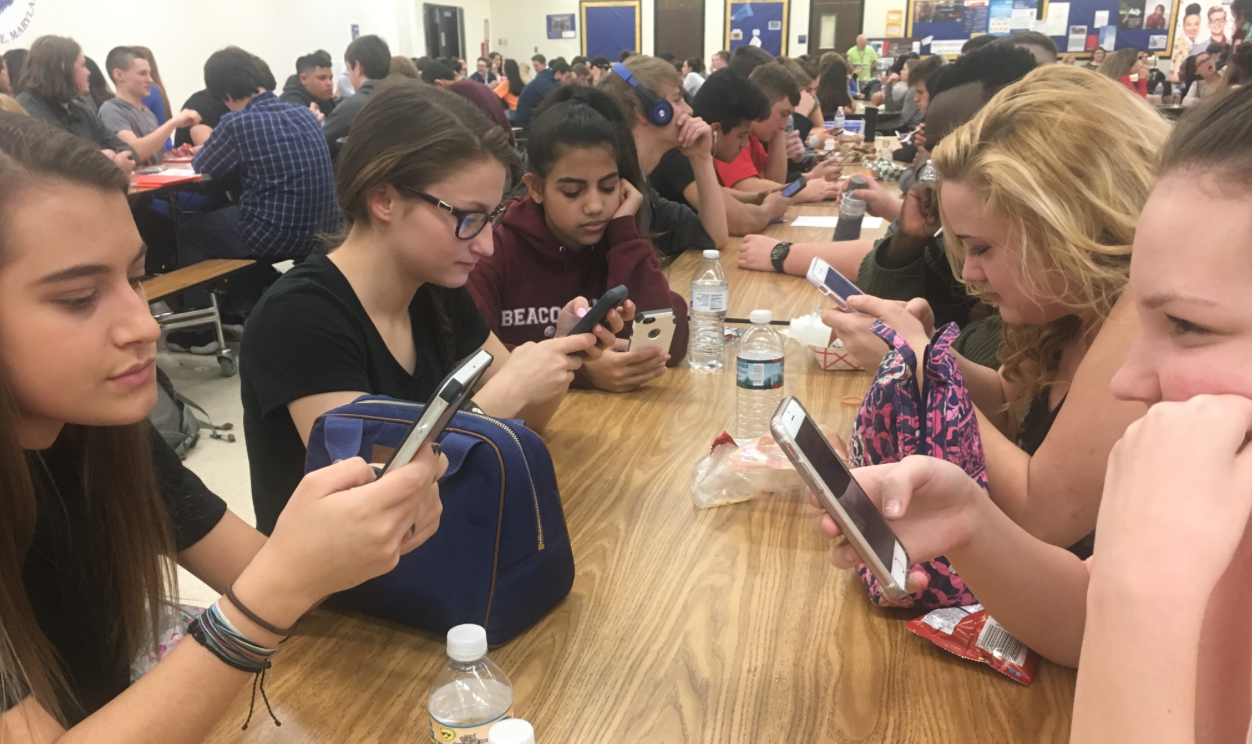 “Whether or not it draws on new scientific research, technology is a branch of moral philosophy, not of science.” ~ Paul Goodman

During my sixteen years in the classroom, I’ve witnessed the unbelievably rapid transformation of mobile phone technology.

At one point, I overheard a brutally honest conversation between a group of senior boys. They felt the constant urge to text, check their texts, and interact on social media. What quickly became obvious is that they were scared of solitude. By their own admission, they literally could not stand to be alone with their own thoughts. I felt honored that they felt safe enough to share this information, but it was somewhat disturbing to hear admissions of such dependency on technology. These young men craved external stimuli and felt alone and empty without it.

At the classical Christian school where I’ve taught for many years, we restricted student cell phone use—phones off and in lockers during school hours. But this is not just about a school technology policy. We are asking our students to “fast” from their phones.

Are we saying that iPhones are inherently evil? Of course not. Fasting is saying “no” to one hunger for the sake of a greater hunger. Fasting aims to tame, or to re-train, our appetites. We live in an age of information gluttony. Sometimes it is helpful to step away from it all, so that we can focus our attention on the truly important things. In the hierarchy of good things, the latest “tweets” from our friends pale in comparison to the depth of sacred writings, the profundity of the Great Books, the beauty of the arts, and the intricacy of creation as revealed in math and the sciences.

At our school, and schools like ours, we desire to train our students to think critically about all areas of life, including technology. Technology is never neutral. It always raises philosophical questions. As the brilliant Neil Postman observed, “In every tool is an ideological bias, a predisposition to construct the world as one thing rather than another, to value one thing over another, to amplify one sense or skill or attitude more loudly than another.” [1] As we fast from iPhone technology during school hours, we hope that students will consider how their lives are governed by technology. Once we understand the “ideological bias” of a technology, we will move closer to using technology with wisdom.

It’s no secret that our culture’s ability to communicate has been greatly affected by ever-expansive and increasingly complex technology. Is this an unqualified good? Just because a technology exists does not mean it should govern our lives. At schools like ours, where we try to pursue the study and contemplation of the True, the Good, and the Beautiful, we seek to create a space where we can fix our attention upon these things—withoutdistractions. We need to learn that it is indeed possible, and desirable, to live without distractions. A constantly distracted person lacks the leisure (true leisure, as desired by the classical philosophical tradition) to contemplate issues of ultimate concern. The Classics have stood the test of time, which is more than we can say for most of the what passes for knowledge on the internet. These are the issues we desire our students to wrestle with, and for parents to discuss with their children.

While teaching our students to think critically about technology is important, another aspect of this policy converges with the ancient wisdom of Scripture and the traditions of the Christian spiritual disciplines. As we fast from cell phones and other social media, this creates a measure ofpsychological silence and solitude. Fasting, silence, and solitude are three practices that serious Christian disciples have always pursued throughout the centuries, following the example of Jesus himself, and many other religious teachers, who often sought out solitude to fast and pray. [3]

In a noisy world, in an age of instant messaging, texts, Facebook, and Spotify, we have unlimited access to information. But, according to the Judeo-Christian tradition, God has never promised to meet us through such means. We are told to “be still, and know that I am God” (Ps. 46:10). The prophet Habakkuk proclaimed: “The Lord is in his holy temple, let all the earth keep silence before him” (2:20). Jesus told his disciples, “If anyone would come after me, let him deny himself and take up his cross daily and follow me” (Lk. 9:23). If we cannot deny ourselves in little ways (like iPhones), then how can we possibly deny ourselves in more challenging and demanding ways?

Finally, we want to create more space for authentic human relationships.The Apostle John writes: “Though I have much to write to you, I would rather not use paper and ink. Instead I hope to come to you and talk face to face, so that our joy may be complete” (2 John 1:12). In a world where we are all “connected,” it is possible for us to be quite disconnected from real human beings. How many people spend hours on Facebook with their virtual “friends” while neglecting the very real people right in front of them? Or worse, how many people really know how to develop and nurture deep relationships with other people? If everyone is our “friend,” then is anyone really our friend?