College Students Rip Obama Quotes… When Told They Are Trump’s 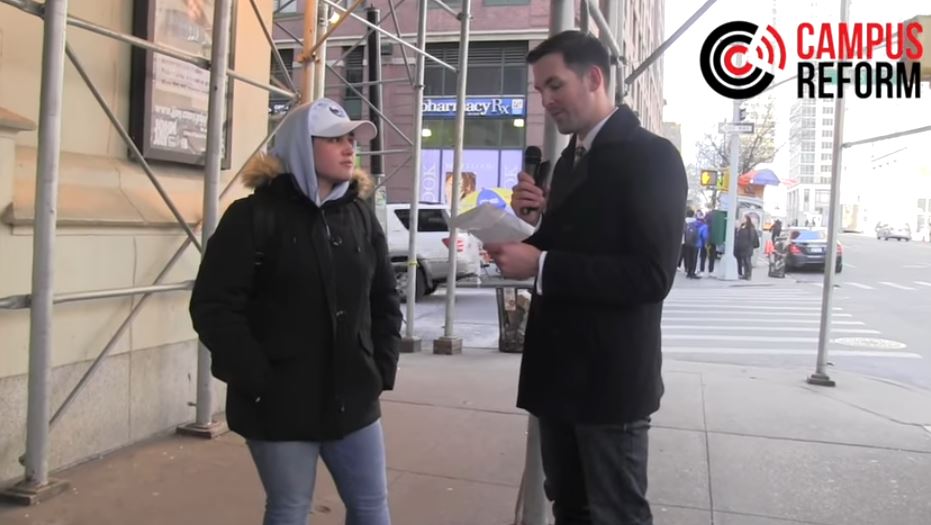 He visited John Jay College in New York City to get student reactions to President Donald Trump’s first State of the Union address. But instead of reading lines from Trump’s speech, he selected a handful of quotes from Barack Obama’s State of the Union:

“We need to call [ISIS] what they are: killers and fanatics who need to be hunted down and destroyed.”

“We have long memories and our reach has no limit.”

“China wants to write the rules. That would put us at a disadvantage. Why should we let that happen? We should write those rules.”

The student reactions, as some might expect, were not positive. “Warmongering,” “aggressive,” and “immature” were some of the words used to describe Obama’s language.

Obviously, these students were reacting to these statements based on their perception of Trump, not the words themselves.

The clip is hardly a “scientific” approach and prompts some salient questions. How many students were asked? What video footage was left on the cutting floor? Important questions, to be sure. But the reality is the video is simply a clever visual demonstration of a truth we already know: many Americans cannot think for themselves.

This fact was demonstrated last year in a Reuters survey. Pollsters saw dramatic shifts in how respondents chose to agree or disagree with a question based on whether they were told the statement was “made by President Donald Trump.” (They called it the “Trump Effect.”)

If you’re one of those people who happen to think Republicans are smarter than Democrats—or vice-versa—the survey results are a disappointment. In some questions Republicans saw greater shifts when Trump’s name was included; in other cases, responses from Democrats saw greater swings.

Party affiliation aside, the takeaway is clear: a great many Americans have little idea where they stand on important issues. Instead, they rely on “their tribe” to determine what they think.

This is a problem. Perhaps the most dangerous consequence of the rise of identity politics is that it prevents people from using their own minds.

As author Sam Harris has stated, “Becoming a part of a movement doesn’t help anybody think clearly.”

Harris is saying, somewhat more succinctly, something the Roman thinker Seneca observed more some 2,000 years ago.

“…it is dangerous to attach one’s self to the crowd in front, and so long as each one of us is more willing to trust another than to judge for himself, we never show any judgment in the matter of living, but always a blind trust, and a mistake that has been passed on from hand to hand finally involves us and works our destruction. It is the example of other people that is our undoing; let us merely separate ourselves from the crowd, and we shall be made whole. But as it is, the populace,, defending its own iniquity, pits itself against reason. And so we see the same thing happening that happens at the elections, where, when the fickle breeze of popular favour has shifted, the very same persons who chose the praetors wonder that those praetors were chosen.”

In a time when identity politics is on the rise, Seneca’s words are worth remembering. And to his credit, one individual who responded to Campus Reform seemed to grasp the inherent dangers of groupthink.

“I am not a fan of [Trump], but being close-minded is probably more dangerous than anything he can do,” the interviewee said. “Do your own research, educate yourself; it’s your duty and the future of the country.”