What Cathy Newman’s Interview with Jordan Peterson Really Tells Us 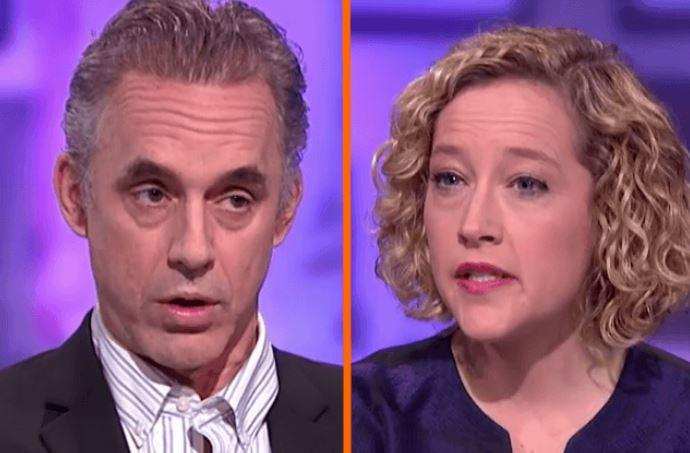 A week ago Britain’s Channel 4, a public service, aired an interview with Canadian academic and free speech hero Jordan B. Peterson. The interview, coinciding with the release in the UK of his book, 12 Rules For Life: An Antidote to Chaos (more about which in MercatorNet soon), has been viewed more than 3,460,000 times on YouTube – indicating both the huge following Peterson has on the internet and interviewer Cathy Newman’s incredibly antagonistic technique.

Conor Friedersdorf of The Atlantic has described this technique – familiar from certain other media, though highly developed in this instance — as follows: “First, a person says something. Then, another person restates what they purportedly said so as to make it seem as if their view is as offensive, hostile, or absurd.”

Ms Newman had made up her mind that Dr Peterson, a clinical psychologist, is a champion of the patriarchy who will do or say anything to prevent the closing of the “gender pay gap” and other current feminist goals. She managed to turn every one of his very reasonable and clear responses against him and somehow regard her case proved.

Even his message to men to “grow up” and become, among other things, fit partners for women seemed to annoy her. “Isn’t the fact that your audience is predominantly male … a bit divisive?” she taunted, rather than asked.

While advertisements portray fathers as “drooling morons”, said Tim Stanley, and little boys are prescribed Ritalin because they “show all the symptoms of being boys,” stern measures are demanded to protect women. Yet, as he noted, the biggest killer for men aged under 50 is suicide. That, too, is blamed on men’s reluctance to talk about their problems.

Many men blame feminism for the current sex wars, but increasingly, the sexes are seeing each other through the distorted lens of modern feminism, which portrays all women as victims and all men as potential rapists — when they are not being ridiculed as Neanderthals, lesser evolved members of the human race.

Unfortunately governments appear to have chosen to listen to the voice of modern feminism rather than real women or real men. At the same time other women claiming to be feminists promote an even worse image of femininity, advocating everything from sadomasochism to pornography and prostitution as “empowering” for women, although all feminists seem to believe that when it comes to oppression, babies pose a much worse problem than men.

As Mr Stanley says, feminism cannot be blamed for “the deindustrialisation of Britain, for destroying blue-collar jobs, killing trades unions or closing down the pubs,” but modern feminism – the so-called third wave – turned up well after the heavy lifting of reform was done, their sense of grievance seemingly compounded by the fact that they have very little to complain about.

It would be nice to think that they could recognise this by campaigning on behalf of women who really have no voice – perhaps even those baby girls who will never get the chance to be born because of their sex – but their campaign is one for privileged women demanding equal representation in Parliament and on boards of directors.

What Dr Peterson advocates – that men should take better care of themselves and take responsibility for their own mess – would, one imagines, be welcomed by most women. But modern feminists like Channel 4’s Cathy Newman have found fault even with that approach, mainly, it would seem, for the illogical reason that more men than women listen to him.

As Mr Stanley concludes, men and women need each other. Most women do not wish to see men emasculated so that a minority of powerful women can take over; men and women need to co-operate in making the world a better place for everyone.

Nobody gains by an increasingly unpleasant sex war – apart from  the cultural warriors whose feminism is based on the writings of Marx and Engels that portray the family as repressive and advocate the “freeing” of women from all domestic ties.

But with the decline of marriage, and with it the influence on public policy of the shared interests of husbands and wives, we see the fruits of this tainted philosophy in growing numbers of single men and women imbued with hostility, mutual suspicion and grievance.

The small family system looks set to be replaced by the no-family system; but such an anti-social “society” will be ripe for a Marxist take-over, in which no one will have a family but everyone will have a Big Brother. All will be equal, but some will be more equal than others – the ones who are most zealous for “equality”.

Whether they will be men or women is a moot point; but they will certainly not be human.

Ann Farmer Ann Farmer lives in the UK. She is the author of By Their Fruits: Eugenics, Population Control, and the Abortion Campaign (CUAP, 2008); The Language of Life: Christians Facing the Abortion Challenge (St Pauls, 1995), and Prophets & Priests: the Hidden Face of the Birth Control Movement (St Austin Press, 2002).