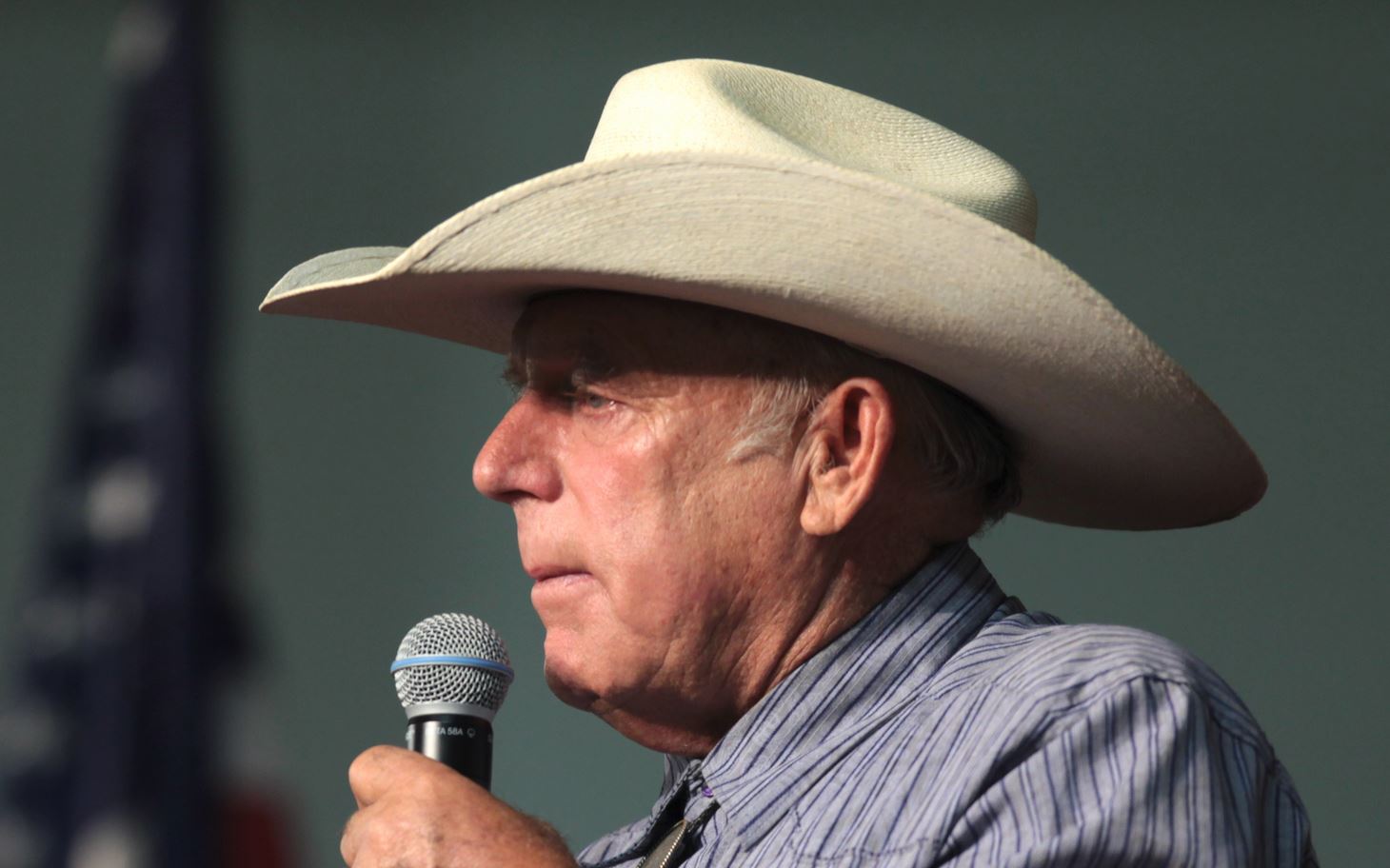 In April 2014, rancher Cliven Bundy put out a nationwide plea. He claimed the federal government, with whom he had been in a land feud for two decades, was taking his property and had come armed for war.

“They have my house surrounded,” Bundy said, from Bunkerville, Nevada. “The federal government is stealing my property … [the Bureau of Land Management] are armed with assault rifles … they have snipers.”

Hundreds of people answered Bundy’s call, many of whom were armed, according to reports.

As a showdown loomed, the nation tensed.

Media reports at the time said Bundy was threatening a “range war” against the feds. Bundy claimed he was merely responding to federal aggression.

“I haven’t called no militia but, hey … there is a strong army out here,” Bundy told a radio host, according to a federal indictment. “Somebody is going to have to back off.”

To everyone’s surprise, it was the feds who blinked.

On April 12, after days of protests and spurts of violence, the Bureau of Land Management (BLM) announced it would not enforce a court order allowing the agency to seize Bundy’s cattle, which had been unlawfully grazing on federal land, citing concern over public safety.

But the saga was not done. Bundy and several members of his family, along with a self-declared “freedom fighter,” were indicted on charges of conspiracy, which carried a maximum sentence of 20 years in prison and $2.5 million in fines.

In November 2017, the case reached federal court, where U.S. Attorney Steven Myhre accused the Bundys of using deceit and propaganda to rally support by falsely claiming the government had surrounded his ranch with snipers and feared his home could potentially become “the next Waco or Ruby Ridge.”

The case looked like a slam dunk. There was just one problem: Cliven Bundy had told the truth.

The Tortoise that Started It All

The desert tortoise is a reptile native to northwestern Mexico and the southwestern U.S. In 1989, the U.S. Fish and Wildlife Service designated it an endangered species.

A few years later, to protect the “threatened” species (a designation it received in 1990), hundreds of thousands of acres of land were tapped for conservation.

“Among the conservation measures required,” a Washington Post article at the time noted, “are the elimination of livestock grazing and strict limits on off-road vehicle use in the protected tortoise habitat.”

The 1993 story noted that not all the ranchers were keen on being forced to sell their grazing rights. Among them was one Cliven Bundy, whose family homesteaded the property in 1877. He called it a “land grab.”

The desert tortoise began a feud between the Bundys and the BLM that would continue for a quarter-century.

The pattern was familiar: Bundy would argue in court that the federal government had no authority to prevent him from grazing on the land; a judge would rule against him and order him to remove his cattle; Bundy would then ignore the injunction. By 2017 Bundy had racked up more than $1 million in fines and fees.

In 2014, then Senate Majority Leader Harry Reid called the Bundys and those supporting the family “nothing more than domestic terrorists.”

The “terrorist” suggestion grew louder after some members of the Bundy family occupied the Malheur National Wildlife Refuge in Oregon in 2016. Ammon Bundy and Ryan Bundy, sons of Cliven, were among seven arrested and charged with conspiring to impede federal workers.

During the occupation, the Washington Post wondered “why aren’t we calling the Oregon occupiers ‘terrorists’?” The Post asked this question even though the paper admitted “it is true that there have been no reports of actual violence, injury or anyone being held inside the Oregon building against their will.”

The defendants, who claimed they were engaging in peaceful protest, were later acquitted on all counts.

The public perception that the Bundys and their supporters were domestic terrorists makes sense in some ways.

In the lead-up and aftermath of the 2014 showdown, the Bundys were portrayed as vigilantes itching for violence. It was a tale easy to spin.

Portraying cowboys in 10-gallon hats, some of whom carry a .45 at the hip and ride horses, as dangerous militia isn’t hard, especially when the people disseminating the information are reporters who tend to rely heavily on law enforcement for information. (I say this as a former crime reporter.)

But proving the tale in court is another matter, and that is precisely what the prosecution had to do.

The state’s entire case against the Bundys rested on the idea the family lied in its nationwide plea for help. The indictment claimed the Bundys used “deceit and deception” to inspire some 200 people to come to Bunkerville by falsely claiming federal agents had surrounded the Bundy ranch with snipers.

Those claims, Mother Jones states, were “dismissed as fiction by paranoid anti-government activists.” But after two years and three trials the government finally admitted that Bundy was telling the truth.

Dan P. Love, the BLM agent who oversaw the Bundy standoff, admitted in sworn testimony that his men did have snipers rifles and had surrounded the Bundy ranch from high positions. Love told U.S. District Judge Gloria Navarro that his agents were merely “practicing.”

Prosecutors also said Bundy’s claim that agents had used excessive force on his son, Dave, was false. Yet evidence emerged showing that officers had in fact bragged about using excessive force.

What’s perhaps most astonishing, however, is that the government spent nearly two years withholding evidence that proved the Bundys were telling the truth.

“Not all prosecutorial subterfuge rises to the level of a constitutional transgression,” Mark Joseph Stern wrote at Slate. “This does.”

The government’s effort to suppress the truth appears to have included document shredding, intimidation, and suppression and destruction of exculpatory evidence.

We know this largely because of Larry C. Wooten, a BLM agent who filed a whistleblower report detailing the misconduct.

Wooten, for nearly three years, was the lead investigator of the case he describes as “the largest and most expansive and important investigation ever within the Department of Interior.” He found himself in the odd position of attempting to lead a comprehensive and unbiased investigation of a matter the government was clearly doing its best to conceal.

In a memo sent to Department of Justice officials, Wooten wrote that his supervisor and team members were actively “attempting to steer the investigation away from misconduct discovery” and that “it became clear to me that keeping [quiet] became an unofficial condition of my future employment with BLM….”

Wooten’s 18-page memo is worth reading in its entirety. It depicts an agency beset by corruption and astonishing unprofessionalism.

Does this whistleblower memo portay a government agency and prosecution out of control? #ClivenBundy …https://t.co/t7VQ83Kmlx

More serious, however, was the sustained effort to suppress any evidence corroborating Bundy’s claim that the BLM had been the aggressors in the confrontation. Government officials apparently soon decided Wooten had to go.

On Feb. 16, 2017, Wooten raised the topic of emails dated April 6, 2014—the day Dave Bundy was arrested—that showed agents making statements about kicking “Cliven Bundy in the mouth (or teeth)” and “not [taking] crap from anyone.” When Wooten asked if the prosecution would have to share the evidence with the defense, he allegedly was told by his supervisor “we do now.”

Two days later Wooten was removed as case lead, the memo states, and “without notification or permission” his hard drive was seized, along with the Bundy case file.

On Monday Judge Navarro, an Obama appointee, dismissed with prejudice all charges against Bundy, his sons Ammon and Ryan, and Montana “freedom fighter” Ryan Payne.

“Now I either have to forgive these people, or I have to hold them accountable,” he told supporters and reporters gathered outside the local sheriff’s office. “I’m not sure. I’m considering my options.”

Wooten suggested that government officials likely are guilty of not just misconduct but of a coverup. The matter is currently being reviewed by the U.S. Office of Special Counsel and multiple congressional oversight committees, according to the memo.

As of Thursday afternoon, neither the Washington Post nor the New York Times has mentioned Wooten or the memo alleging the misconduct and coverup.

The desert tortoise, the creature that started the 25-year feud, also appears to be safe.

A bureau report found that Bundy’s cattle pose no threat to the protected reptile. Prosecutors, however, declined to share the study with Bundy’s defense team.