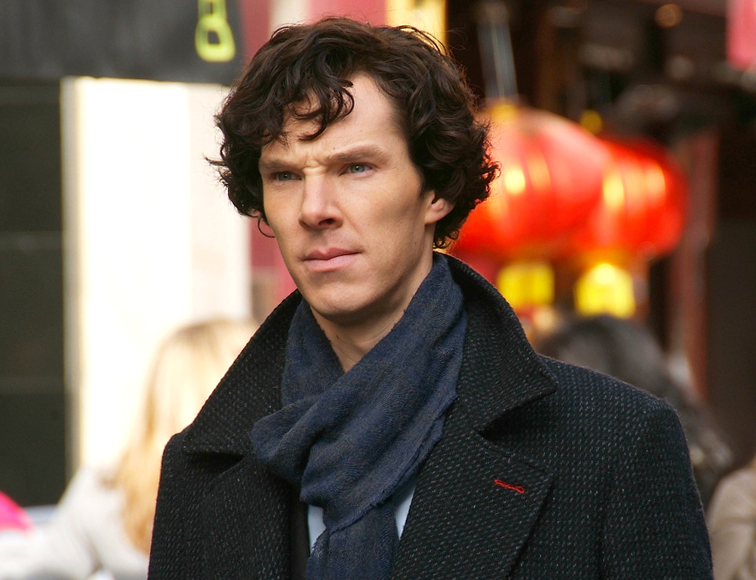 According to Guinness World Records, Sherlock Holmes is the most portrayed movie character in history. He has been played by more than seventy actors in over 200 films. To the older genertion, he will always be seen as he was portrayed by Basil Rathbone in a succession of films made between 1939 to 1946. Today, however, he will be best known for Benedict Cumberbatch’s portrayal of him in the ongoing TV adaptation, Sherlock. What follows will be a personal impression of the inaugural episode (season 1, episode 1) of Sherlock, which I watched recently with a friend who thought I would enjoy it.

Mr. Cumberbatch’s Holmes lives in contemporary London, a place which is philosophically and demographically rootless, a place of ultimately meaningless transience, where nothing really matters. Everyone is homeless, devoid of any realities that clutch, and the whole of life seems to float in a computer-generated fake-reality, virtual and virtueless. The only things rooted in the real are the cold, hard facts that Holmes unearths as clues. Beyond these facts there is no truth. Nothing is definite. All is ambivalence. Nothing is beautiful. There’s only ugliness. We don’t see the sky. Nor do we see any living tree or plant. Nothing that grows and has life. Instead, we see only the walking dead.

Holmes describes himself as “a high-functioning sociopath,” which makes him relatively normal because all the other characters are also sociopaths, albeit low-functioning ones. The truth is that Holmes only differs from everyone else in terms of aptitude but not in terms of attitude. He’s smarter than everyone else but he’s equally screwed-up and equally self-centred. Nobody is well-adjusted and nobody lives their lives by self-sacrificially laying them down for others. When marriage is mentioned, which is rarely, it’s only in terms of its betrayal through acts of adultery. Love, we are told at a climactic moment, is the most vicious of motives. Whereas heterosexual relationships are self-serving and generally stink, homosexuality, which is explicitly and allusively omnipresent, almost to the point of being an obsessive preoccupation, is affirmed as being “good.” Indeed, and if my memory serves me correctly, homosexuality is the only thing in the entire ninety minutes of the drama which is affirmed as being good.

None of the foregoing is intended as a negative portrayal of the purely artistic merits of the drama. The writing is brilliant, though obviously derivative of the genre. The plot, it seemed to me, was borrowed not from Conan Doyle but from Chesterton, turning as it does upon the fact that a man can be made invisible by the practice of his profession. In Chesterton’s story, “The Invisible Man,” published in The Innocence of Father Brown, nobody notices the postman as he delivers his letters, thereby making him “invisible” as he commits the crime. In Sherlock, it is the taxi driver who goes unnoticed as he commits his crimes. It’s possible, of course, that Conan Doyle had employed this same trick in one of his own stories, independent of Chesterton, or that Chesterton had actually been inspired by an earlier story by Conan Doyle which I have not yet read. It is in any event evident that the writers of Sherlock were employing a time-honoured plot device from the detective storytellers’ bag of tricks. Since it has been said, by T.S. Eliot I believe, that bad writers borrow but good writers steal, we will not consider such theft to be blameworthy.

If the writing is good, so is the cinematography which captures the darkness of modern London and the fragmented nature of modern life. Like the (anti)culture that it depicts, it is all broken pieces which can’t be put together again, a reflection of the topsy-turvydom of humpty-dumptydom. It is Eliot’s Wasteland devoid of Eliot’s hope. The diaspora of despair.

The cinematography and the writing combine to keep us in as state of agitation. Our eyes are not allowed to rest on any image for more than a second or two, allowing the restless profusion of images to feed our frenzied addiction to incessant distraction and our disordered craving for attention-deficiency. The camera angles are edgy because they depict the edginess of the very edge of reality, the hinterland between the nightmare reality of nihilism and the comfortable numbness of narcissistic escape. And yet there is no escape. As with all addiction, every high is followed by ever darker lows. The narcissistic numbness passes, and only the nihilistic nightmare remains. The is the edginess on the edge of despair, the cutting edge that cuts life to pieces with its nothingness.

We have a home and we can feel at home, even in this land of exile, because of the presence of real love, the love that gives itself to others and willingly pays the cost. The real presence of this love is the home of man. Its absence makes us homeless. Its absence leads to despair, which is the homelessness of hopelessness.

When all is said and done, the answer to modernity’s existential angst is all so very simple, or, as Holmes might say, it is elementary.