Why Was Michael Flynn Charged with Lying to the FBI When Two Clinton Aides Got Off Scot Free? 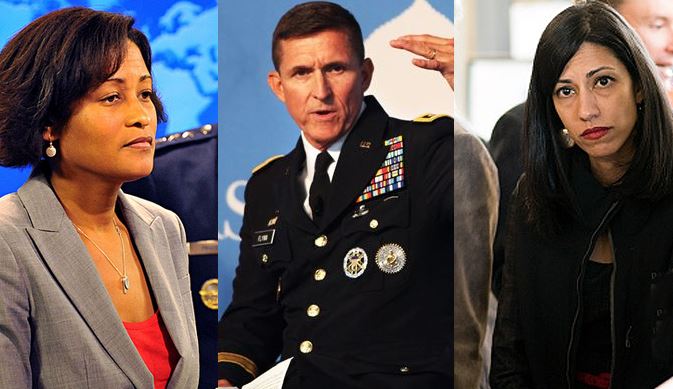 Robert Mueller’s probe into President Donald Trump’s alleged ties to Russia during the presidential election is reaching a crescendo.

Former National Security Advisor Michael Flynn last week agreed to plead guilty to lying to the FBI and is now cooperating with the prosecution, setting off a frenzy of speculation about how high the investigation will go.

While it’s unclear who the next target of the investigation will be, credible voices are beginning to call into question the credibility of Mueller’s prosecution.

Many of the questions stem from questions surrounding FBI section chief Peter Strzok, who was relieved by Mueller following revelations that he sent anti-Trump messages to his mistress, a lawyer at the FBI. The details of the texts have not yet been made public, but Mueller’s refusal to turn this evidence over to the House Intelligence Committee has created more problems.

The probe is a tangled mess of House of Cards-like proportions. It’s anyone’s guess where it will lead, but it’s worth examining Strzok’s role in all of this.

As Daily Caller reporter Chuck Ross points out, Strzok was at the heart of not just Flynn’s investigation, but also the FBI’s investigation into Hillary Clinton’s unlawful server.

During that investigation, it was discovered that two Clinton associates, Cheryl Mills and Huma Abedin, made false statements to the FBI. Neither faced legal consequences for their misleading statements.

Mills and Abedin were caught red-handed. They told FBI agents they had no knowledge of Clinton’s external server—even though their own emails and testimony from colleagues indicate they were fully aware the server existed.

Investigators and prosecutors of course have discretion in whom they choose to charge, but Flynn’s treatment versus that of Mills and Abedin gives a whiff of selective prosecution, which is a problem for several reasons.

First, selective enforcement undermines the rule of law. We’re not talking about a traffic cop letting someone off for speeding here. Making false statements to federal agents is a serious crime, and if Strzok intervened on behalf of Mills and Abedin for personal reasons, that would be a problem.

Second, the FBI’s actions reinforce the theory that the federal bureaucracy is becoming politicized.  From the beginning of the Trump presidency, there has been a fear that Trump’s own intelligence agencies were undermining his presidency through a steady stream of leaks (either because they think he’s crazy or see him as a threat).

This is dangerous, as Damon Linker of The Week pointed out following Flynn’s ouster.

“The results might be salutary, but this isn’t the way a liberal democracy is supposed to function. Unelected intelligence analysts work for the president, not the other way around. Far too many Trump critics appear not to care that these intelligence agents leaked highly sensitive information to the press—mostly because Trump critics are pleased with the result. ”

If factions within the intelligence community are actively seeking to undermine Trump’s presidency, it’s difficult to overstate the threat it poses to our democracy.

What can be done?

I think perhaps Hugh Hewitt had it right in the Washington Post. In light of the allegations against Strzok, Hewitt wrote that a special counsel should immediately be appointed to investigate the FBI and Justice Department.

“This is a blockbuster revelation, carrying the possibility of shattering public confidence in a number of long-held assumptions about the criminal-justice system generally and the FBI and the Justice Department specifically. The Justice Department should appoint a special counsel to investigate Strzok’s actions as soon as possible.”

I can’t think of a better idea. It’s an age-old dilemma: Quis custodiet ipsos custodes? Plato raised the question in the Republic some 2,500 years ago.

Plato believed it was a foolish question. Love of virtue would keep the guardians in their proper place.

With all due respect to the Greek philosopher, I prefer a different approach: Trust but verify. In light of these allegations, it seems prudent to find out who our guardians are actually protecting.