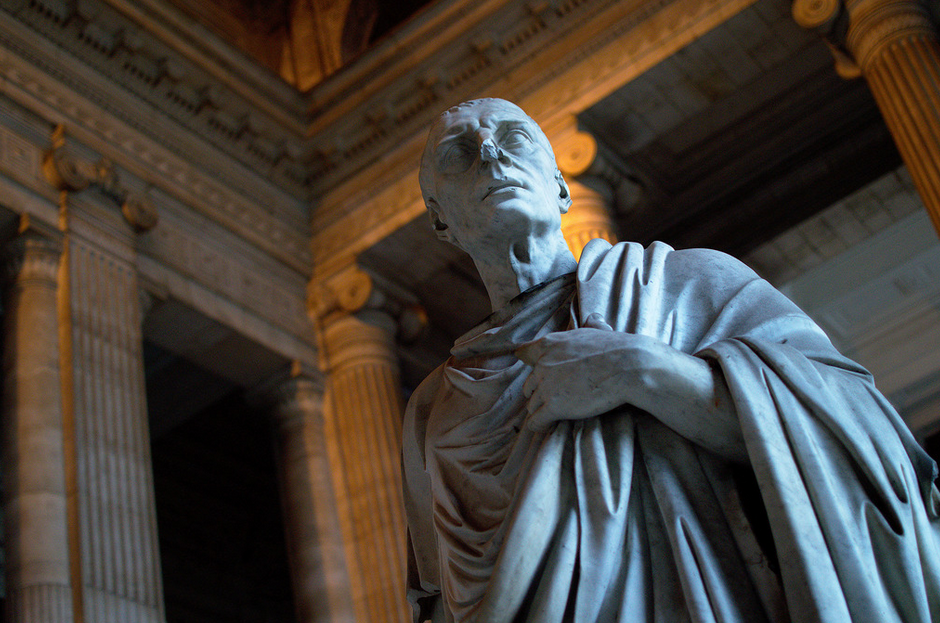 John Adams said of Marcus Tullius Cicero (106-43 BCE) that “All ages of the world have not produced a greater statesman and philosopher combined.” Anthony Everitt called him an “architect of constitutions that still govern our lives.” Thomas Jefferson said the Declaration of Independence was based on “the elementary books of public right, as Aristotle, Cicero, Locke, Sidney, etc.”

Cicero was a Roman Senator whose writings, as Historian Edward Gibbon put it, “breathed the spirit of freedom.” Particularly influential was his idea of natural law, echoed by John Locke and other enlightenment thinkers: Human nature included reason, which could discover justice, which was the basis of law. Voltaire said “He taught us how to think.”

Cicero stayed loyal to the Roman Republic against Julius Caesar. Antony had him murdered for his principles, and his head and hands were nailed to the Senate speaker’s podium as a warning to others, making him a model of resistance against tyranny to America’s revolutionary leaders.

Justice is the crowning glory of the virtues.

Justice consists in doing no injury to men.

Justice is the set and constant purpose which gives every man his due.

The foundations of justice are that no one should suffer wrong; then, that the public good be promoted.

Justice must be observed even to the lowest.

Justice does not descend from its pinnacle.

Justice extorts no reward, no kind of price; she is sought…for her own sake.

True law is right reason in agreement with nature; it is of universal application.

The welfare of the people is the ultimate law.

The precepts of the law are these: to live honestly, to injure no one, and to give everyone else his due.

According to the law of nature it is only fair that no one should become richer through damages and injuries suffered by another.

The strictest law often causes the most serious wrong.

The more laws, the less justice.

The arrogance of officialdom should be tempered and controlled.

The administration of government, like a guardianship, ought to be directed to the good of those who confer, not of those who receive the trust.

When a government becomes powerful…it is an usurper which takes bread from innocent mouths and deprives honorable men of their substance for votes with which to perpetuate itself.

We are in bondage to the law so that we might be free.

The essence of liberty is to live as you choose.

Freedom is a man’s natural power of doing what he pleases, so far as he is not prevented by force or law.

Freedom is a possession of inestimable value.

What is so beneficial to the people as liberty…to be preferred to all things.

Liberty is rendered even more precious by the recollection of servitude.

Only in states in which the power of the people is supreme has liberty any abode.

Peace is liberty in tranquility. Servitude is the worst of all evils, to be resisted not only by war, but even by death.

Cicero was an important influence behind the American Revolution. He symbolized opposition to tyranny and his ideas on justice, law, and liberty inform our founding documents, which is why Jim Powell’s The Triumph of Liberty begins with Cicero’s story. Though he wrote two millennia ago, his understanding of why defending liberty requires tightly constraining government was thoroughly modern: “Never was a government that was not composed of liars, malefactors and thieves.”

If Americans are serious about their liberty, which is defended by treating our founding documents as more than mere words on paper, Cicero merits renewed attention today.