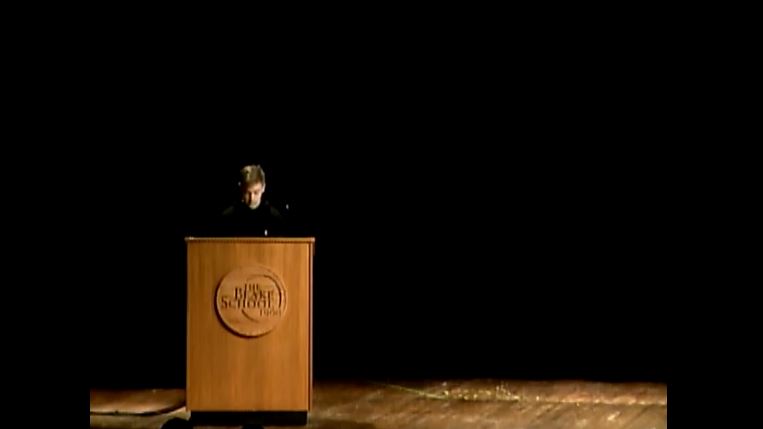 The Blake School, a private college prep school, located in Hopkins, Minnesota, was a place he woke up excited to go to each morning. And then, about four years ago, something changed.

“Slowly the unification of our great community began to deteriorate,” said Rickert, who had attended Blake since kindergarten.

Rickert, currently a freshman at the University of Wisconsin, explained what happened to his school during his senior presentation last spring. In a nine-minute speech titled “Division,” Rickert explained how the Blake School’s new emphasis on race, gender, and privilege created fissures between students and kindled resentment.

“White. Black. Asian. Gay. Straight. It never mattered before. Yet now, we are all identified by what group we were assigned,” Rickert said. “We didn’t assign these; the school and society did.”

Where previously students had learned a core curriculum and were taught how to think, students suddenly found themselves being fed an agenda.

“We are not here to be manipulated to think a certain way,” Rickert said. “That is called indoctrination.”

As an example, Rickert cited the first day of school. He said students were required to introduce themselves by their pronouns.

“If someone sees themselves as a gender other than what they were born, I don’t care,” Rickert said. “But forcing me to participate in something where I have to proclaim what gender I am has no place in a school classroom.”

The school’s new emphasis on race and gender theory created an environment in which many students no longer felt comfortable to talk about and share ideas. Lectures on “white privilege” in particular seemed to chafe Rickert.

“All of a sudden the suggestion is put in front of every white person in this school that racism is inherent in them because of the color of their skin,” Rickert said. “White privilege equals shut-up; anything you say has no meaning because you are privileged.”

Rickert noted that school officials at Blake, a private institution, can run the school however they choose. Parents, similarly, are free to remove their children if they wish. He simply expressed his hope that the school he loved would rediscover its ideals.

“I’ve had many incredible teachers that helped me along the way, and for them I am grateful,” he said. “My wish for the Blake School is that it becomes what it used to be. A school where the students accepted each other’s differences, and the leaders of the school didn’t force their political agendas on us.”

We’ve noted these education trends at Intellectual Takeout before (here, here, here, here, and here), so many readers likely are familiar with the issues to which Rickert speaks.

But I was impressed to see a young man share them so clearly and calmly. Most of all, I was impressed with Rickert’s courage. There is perhaps not a single issue in America that is more difficult to challenge. Orthodoxy on social justice is expected today, at least in educated, corporate, and upper-class circles.

Those who challenge this orthodoxy know they place their careers and future prospects in jeopardy. If you doubt this, just look at what happened to Google’s James Damore or Apple’s Denise Young Smith.

Pushing back on this orthodoxy is not easy. People may loathe the ideology, but they are also afraid of it, something Rickert learned.

“As I was putting this speech together and discussing it with my friends, I was in disbelief in how many people actually agree with me,” he said. “Many have similar viewpoints but are afraid to say anything.”

I don’t believe this is some throwaway line.  I say this because I’ve experienced the same thing.

I get emails and calls from people “fed up” with the divisiveness of identity politics. Yet when I ask people to go on record for a story, they almost always decline.

Writing articles about school indoctrination is all well and good, but it’s going to take parents speaking out about these issues at the local level to bring school officials back to their senses.

If parents are serious about seeing their children get a real education instead of divisive social justice mantra, they’ll need to find their voices—and their courage—like Owen Rickert did.

Convictions, even if they are right, are worth nothing if one is afraid to share them.