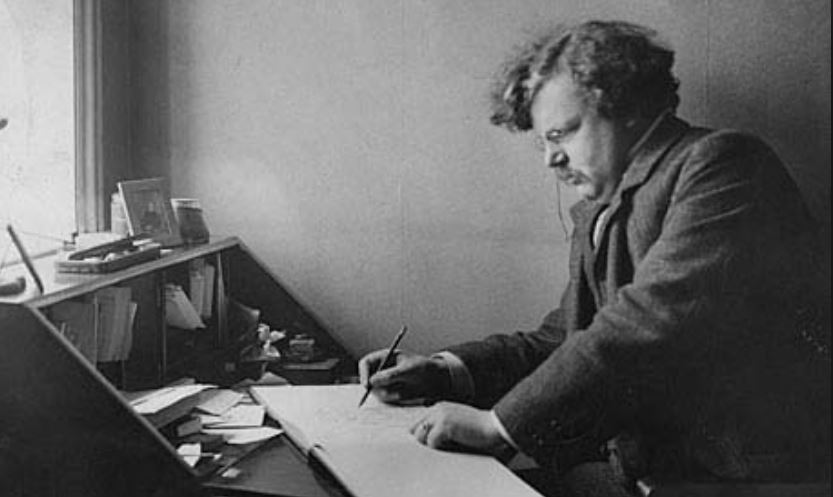 If one were to capture G.K. Chesterton’s philosophy to just a few words, it could be done in this sentence: Free will exists. Almost everything else that he wrote followed from this belief, including his objection to fatalism and determinism in all their forms.

Chesterton did concede that the determinist thinks that he is a bold man, even a free man, because he is free to disbelieve in free will. But to Chesterton the more “massive truth” is that a true determinist is not truly free to do any number of things.  He is not really free to curse—or rejoice, to doubt—or believe, to resist temptations—or succumb to them, to make New Year’s resolutions—or to break them, to rebuke tyrants—or to praise them.  Why, he isn’t really free to so much as say “thank you” to his table mate for passing him the mustard!

Chesterton rejected optimism and pessimism because he found both to be expressions of a fatalistic approach to life, which he believed was a story to be lived rather than a plan to be unfolded.

Optimism, Chesterton contended, encouraged a kind of dangerous complacency. Why bother working toward some good end or goal when at base one believes that everything is going to turn out fine anyway? And pessimism? In its own perverse way, Chesterton thought it encouraged a kind of complacency all its own.  Why bother trying to stop some bad end or some evil act when everything is going to turn out badly anyway?

Of course, it’s possible that Chesterton was a closet optimist of sorts. After all, he did think that the world in which we live is essentially a “good universe.”  Progressives, on the other hand, see it as a “bad universe,” but one that surely could be made good with just the right touch. Chesterton dissented from such a point of view; this would still be a good universe, even if it got much worse instead of better.

Good, bad, or worse, this universe would always be one in which people would be free to exercise their free will to make it good, bad, or worse. As you might expect, Chesterton had his own unique way of making his major point about this unique feature of man, namely his free will. Yes, human beings are free to choose, whether that means being free to choose to do the wrong thing or the right thing.

How often have you heard someone defend a bad choice by saying something to the effect that “it’s a free country, isn’t it?” The problem, of course, is that being free to do whatever one wishes was not the sort of freedom that the founders of the American experiment had in mind. The success of their experiment was going to depend upon people freely doing the right thing (as opposed to whatever feels good at the moment).

That stipulated, let’s return to his unique case for free will—and for man being essentially quite different from all other animals. He put forth the following two scenarios. Think of someone about to witness someone else getting ready to down his tenth whiskey. What might you do if you were to witness such a scene? Chesterton thought you might well slap him on the back, saying “cut it out, be a man.”

On the other hand, if you were about to observe a crocodile preparing to consume its tenth explorer, what would you do? Or, better yet, what wouldn’t you do? Well, you likely wouldn’t bother pounding the crocodile on its back, while exhorting, “cut it out, be a crocodile.”  After all, the crocodile was doing exactly what crocodiles do. And once it was done, it was done—and satisfied.

Unlike a crocodile, a man (or a woman) is the kind of being who is capable of ruling himself. A man (or a woman) should also be aware that there is a standard of what it means to be human, a standard that is surely being violated by downing that tenth whiskey.

Man, in sum, is improvable.  A crocodile is not.